If Intel is often in the news, it is AMD that should be the first to distribute its new generation of processors, the Ryzen 7000 series.

For several months now, official communication from Intel and multiple rumors have been circulating around the 13th generation of processors from the American, the already famous Raptor Lake. At DriversCloud, we have for example detailed the first test published around a Core i9-13900K chip - future flagship of the new range - still in the pre-release state. More recently, we also mentioned the latest rumors about the upcoming availability of these Raptor Lake processors: everything leads us to believe that they could be available from mid-October 2022.

Unquestionably more discreet, AMD works silently, but without sparing its efforts. For more than two years now, AMD has been preparing to follow up on the success of the Ryzen 5000 series based on the Zen 3 architecture. The Zen 4 architecture will logically take over, and for this, AMD is counting on the "Raphael" range of processors, better known as the Ryzen 7000 series. More and more information is reaching us about this range, which should be limited to four references: at the top of the list, we find the Ryzen 9 7950X, its 16 cores / 32 threads and its TDP estimated at about 170 Watts. One notch below, we find the Ryzen 9 7900X which will be satisfied with 12 cores / 24 threads and the Ryzen 7 7700X with 8 cores / 16 threads. On the previous generation, AMD had retained the Ryzen 7 5800X for the launch and the 5700X had waited over a year to be distributed in turn. This time, AMD seems to have to do the opposite and we still have no launch window for the Ryzen 7 7800X.

On the other hand, the first salvo of Zen 4 processors should end with the Ryzen 5 7600X. This CPU will have 6 cores / 12 threads, which is as much as the processor it will replace, the Ryzen 5 5600X. However, recent information published by Videocardz highlights that there are significant differences between the two generations. Beyond the changes in the cores, the Ryzen 5 7600X will also have higher operating frequencies: +700 MHz in base frequency (@4.4 GHz) and +350 MHz in boost frequency (@4.95 GHz). In addition, with this new generation, AMD plans to launch a new platform - the AM5 - which will support PCI Express Gen 5 and DDR5 RAM. The Ryzen 5 7600X was first tested with 32GB (2x 16GB) of G.Skill Trident Z5 RGB DDR5-5600 on an ASRock N7-B65XT motherboard. 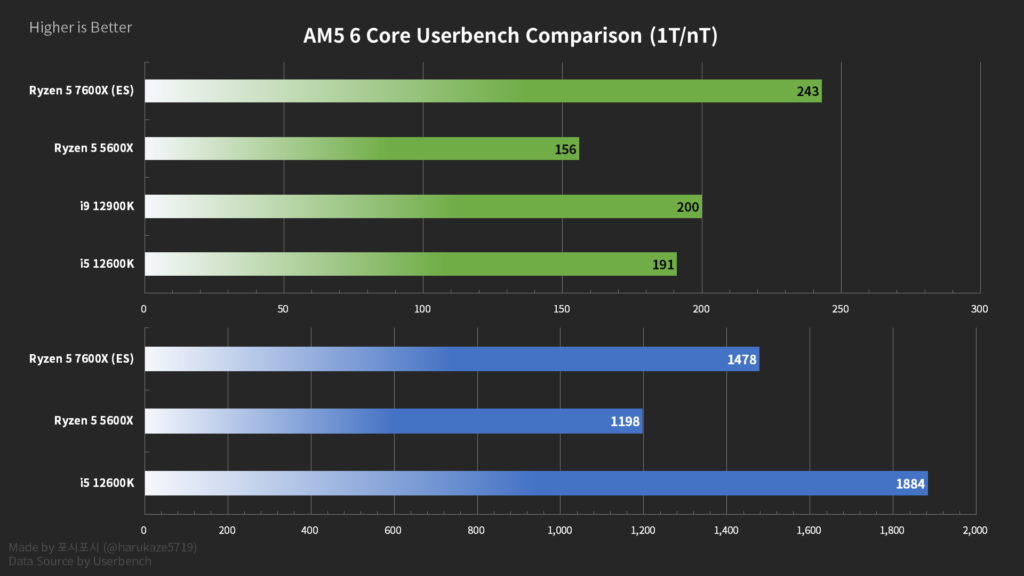 On paper, these are some very promising technical details for a generation of processors that we're waiting for feverishly, while AMD has hardly given any tangible news. Today, everything leads us to believe that the company will be perfectly capable of keeping its commitments and its schedule. As proof, we are talking about a launch in September 2022. This is a way for AMD to cut the ground from under the feet of its long-time competitor - Intel - which seems to be aiming for mid-October.