Processors expected by both energy-saving enthusiasts and video game fans.

The least we can say is that AMD did not come empty-handed to Las Vegas for the CES 2023, the big electronics show that was held until yesterday in the big city of Nevada. Indeed, Lisa Su - the group's CEO - took the stage to present a lot of novelties in terms of processors for desktop machines, mobile processors, data servers and graphics solutions. Let's focus here on the desktop processors, which are planned to increase the Ryzen 7000 offer that AMD launched only two months ago. 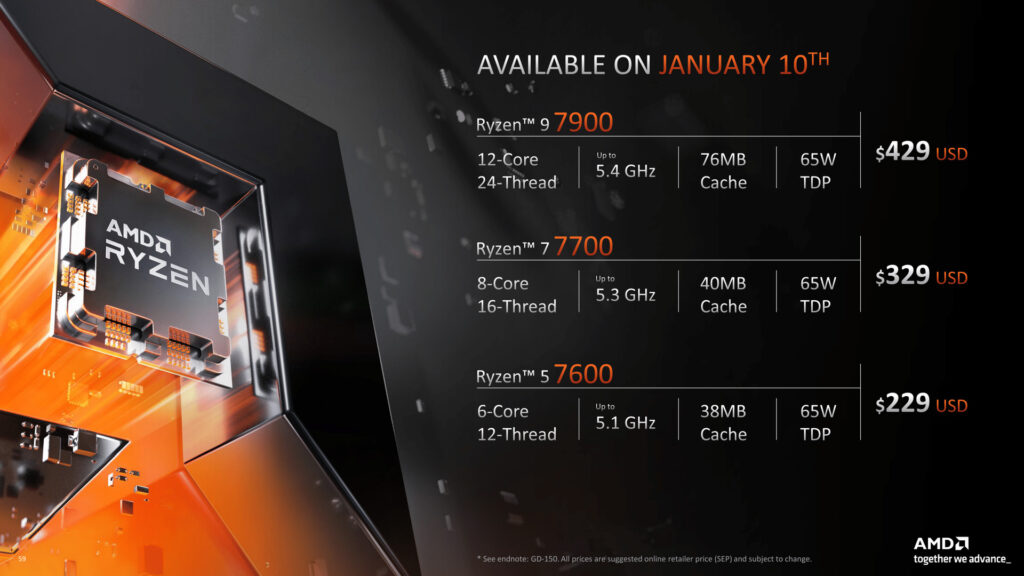 In a few days, the Ryzen 7600X, 7700X, 7900X and 7950X will no longer be alone. Indeed, the "non-X" range will arrive on the market since Lisa Su has clearly announced a release for January 10. Even better, the president of AMD took the opportunity to detail her new offer. As various rumors indicated, the extension of the range will be done by "only" three non-X models, the Ryzen 5 7600, the Ryen 7 7700 and the Ryzen 9 7900. Let's note right away that the strongest of the X range - the 7950X - will not have its "simplified" version. Indeed, the characteristic feature of this new range is the limitation to a TDP of 65 Watts when the X models could reach and exceed 170 Watts.

It is worth noting that the non-X models will be marketed with a ventirad designed by AMD. A fan that the brand wants to perform well, but which will probably not allow optimal cooling of processors that are not designed to go as far as their X counterparts. On paper, the characteristics (cores, threads, cache and frequencies) are identical, but the lowering of the TDP will have an impact on the potential of the chips to maintain a very high frequency level over time. That said, it also has an impact on the price: it is announced $ 229 for the Ryzen 5 7600, $ 329 for the Ryzen 7 7700 and $ 429 for the Ryzen 9 7900. 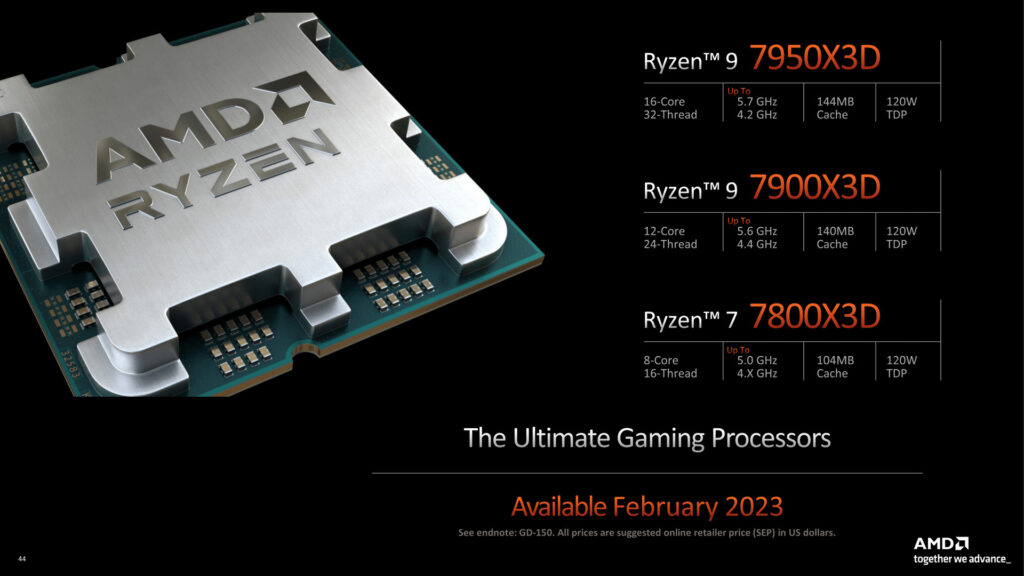 However, this is not the only novelty that Lisa Su had brought with her and next to these "non-X" on January 10, Ryzen 7000 processors "X3D" will arrive in February. The exact date and price of these processors are not yet known, but the Ryzen 7000X3D are characterized by the presence of a 3D Vertical Cache, in other words, additional cache in the form of a module literally stacked on the rest of the chip. Three models have been mentioned by AMD: a 7800X3D with 104 MB of cache, a 7900X3D with 140 MB and a 7950X3D with 144 MB. Despite this increase in cache, AMD also announces a decrease in the TDP of these monsters (from 170 to 120Watts) that the American company intends above all to (very) demanding video game enthusiasts.