The GeForce RTX 4070 Ti has been rumored for several weeks now, but it has not only been confirmed by NVIDIA.

On October 12, 2022, a fortnight after its official announcement, the GeForce RTX 4090 was launched by NVIDIA, which inaugurated its new generation of graphics cards, based on the Ada Lovelace architecture. Fiercely powerful and with a very interesting energy efficiency, the card had however a big flaw for many gamers: its price. At around 2,000 euros, few can afford such a "toy". Unfortunately, it was not the second card in the RTX 4000 series that really changed the situation. Indeed, if on November 16, 2022, a GeForce RTX 4080 was distributed to lower the entry ticket, the newcomer is still much too expensive, at about 1,500 euros.

For many gamers, and while waiting for hypothetical RTX 4060s, salvation seemed to come from the GeForce RTX 4070 Ti, which has been talked about since mid-November, but has only just been made official by NVIDIA. In the run-up to CES 2023 in Las Vegas, the American company confirmed the release of this third Ada Lovelace graphics card and also insisted on its sales price, which marks a clear decrease compared to the previous RTX 4000. It is indeed a question of a release at 799 dollars in North America and 899 euros in Europe. This is still a lot of money, but the difference with other models is indeed significant. A gap that is however found in the technical specifications of the beast.

NVIDIA confirms here the rumors that attributed 7,680 CUDA cores, 60 RT cores, 240 Tensor cores, 240 TMUs and 80 ROPs to this GeForce RTX 4070 Ti. The American company also confirms the 12 GB of GDDR6X video memory at 21 Gbps with a 192-bit interface bus for a bandwidth of 504 GB/s. Less power hungry than its larger sisters, the GeForce RTX 4070 Ti also boasts a TDP of 285 Watts while, of course, NVIDIA is carrying over here the sixteen-pin 12VHPWR connector that it introduced with the first RTX 4000s. There is, however, a notable difference with these " first RTX 4000s ". 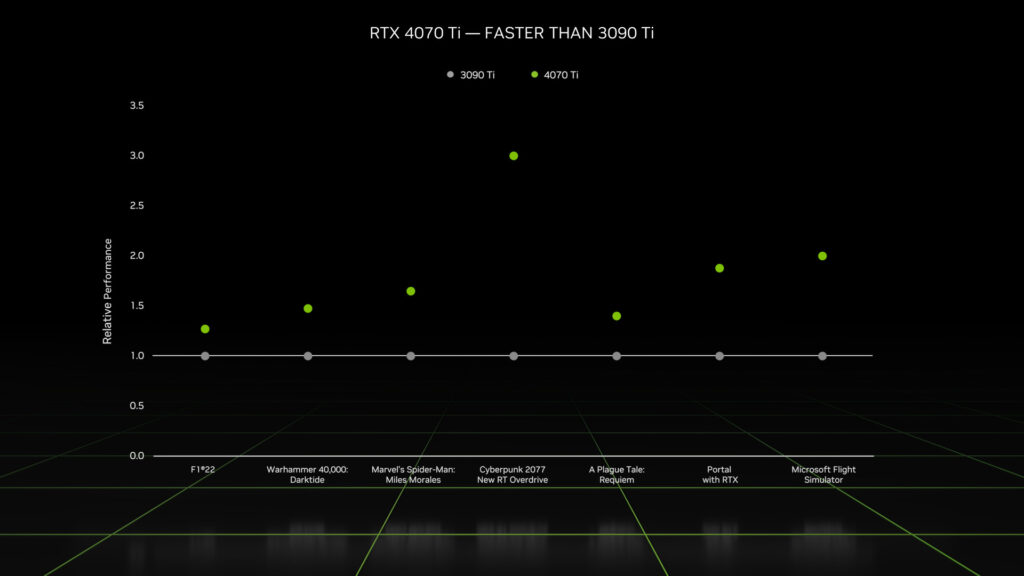 This time, NVIDIA will not be marketing any cards under its own name, so there will be no Founders Edition. Logically, NVIDIA's partners will be alone and ASUS, Gigabyte, MSI and other PNY have already announced a number of models to "flood" the market. Unfortunately, not all of these models will be at the same price as NVIDIA, and while some cards will be priced at 899 euros, others will cost more than 1,000 euros due to a more advanced cooling system and operating frequencies that are one notch higher. These frequencies should allow us to verify the performance claimed by NVIDIA a little more.