After the Steam Deck and the Logitech G Gaming, Razer also launches into the portable console Who would have bet on this new direction only two years ago?

There is no guarantee that buyers will be there. Nothing says that in two years, these products will not be completely forgotten. However, most of the big names in the PC world seem to believe in the existence of a new market for portable game consoles. A market that is mature enough to accept peripherals of a somewhat new and relatively expensive kind. This is what Steam seemed to believe at first with its Steam Deck, which mixes the PC game library with a (large) portable console format.

Shortly after, it was Logitech's turn to announce its Logitech G Gaming last September. With its Nintendo Switch look, the Swiss equipment manufacturer's machine is oriented towards cloud gaming with support for NVIDIA's GeForce Now and Microsoft's Xbox Cloud Gaming. This is a clear change of register, since it is no longer a question of storing games on the console and even the calculation part is limited to its simplest expression: that's the whole point of cloud gaming, everything happens remotely on large servers set up by NVIDIA and Microsoft in this case... provided, of course, that the Internet connection is there. 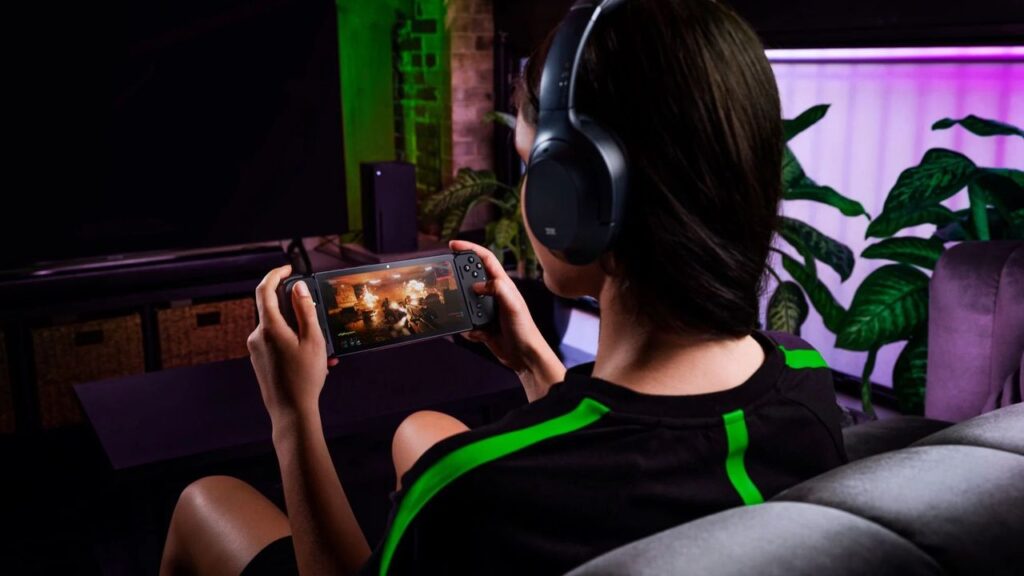 Today, it's Razer's turn to unveil the Razer Edge at its annual event - the aptly named Razer Con - which was a rather well-kept secret since the rumors surrounding the beast are very recent. Available in two versions (5G and Wi-Fi), this new console also seems to be moving towards cloud gaming with support for NVIDIA GeForce Now and Microsoft Xbox Cloud Gaming services. One major difference, however: unlike Logitech's console, the Razer Edge will be able to run games natively, without necessarily having an Internet connection. These will only be Android games, but the distinction is worth noting.

For the rest, the Razer Edge seems to insist on the quality of its screen, for which Razer highlights AMOLED technology and an image definition of 2,400 x 1,080 points: on a diagonal of only 6.8 inches, this should give a very fine image. The issue of refreshment is also addressed with a maximum of 144 Hz, but we do not know to what extent it will be variable so as not to exhaust the battery. The latter, with a capacity of 5,000 mAh, should provide a nice autonomy to the machine, but Razer does not yet mention the thing, just as it does not mention the amount of memory or storage that he has planned for his machine.

A machine that will be powered by a Snapdragon G3X Gen 1 SoC with an Adreno GPU. Haptic feedback and a 3.5 mm audio jack complete an offer around which there are still many unknowns. For example, Razer mentioned a release date of next January, but did not specify whether this was only for the United States or also for Europe. This is a legitimate question, since Razer only mentioned the price in dollars ($399.99 for the Wi-Fi version) and confirmed that the price of the 5G version will be announced by Verizon.