When Noctua reviews the application of thermal paste in your PC The Austrian cooling specialist details which method he thinks is best for your motherboard socket.

There was a time when we didn't even talk about thermal paste or fume hoods. The processors on our PCs were cooled by a simple little heatsink and that was good enough. Of course, I'm talking about a time that people under 30 years old can't know. A time when the star processors were called Intel 80386 or AMD AM386 and the frequencies were hardly more than 33 or 40 MHz. Things have changed since then, and in order to correct the impurities that exist on the surface of the processor as well as the cooling system, it is essential to apply a (very) thin layer of thermal paste.

However, beyond the choice of the thermal paste, the application of the said "layer" is not self-evident and everyone has their own theory to explain, here that it is much more efficient to apply a "turd" in the middle of the processor, which will then be spread with a credit card, for example, and there that the best way is to deposit several very small "droplets" of paste on the entire processor. Some people have even decided to evaluate the effectiveness of this or that solution with the help of a Plexiglas plate that allows them to evaluate the spread of the paste when installing the heatsink. 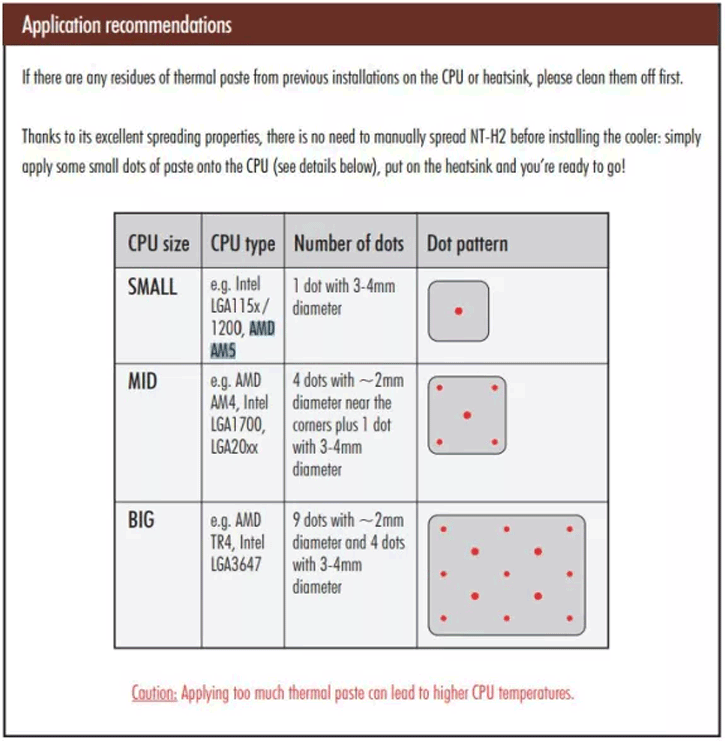 We are not here to say who is right and who is wrong, but to mention the recent commentary of a specialist in the field. The famous manufacturer of cooling solutions Noctua has indeed decided to dot the "i's" or rather to put forward its recommendations which we are then free to follow... or to ignore completely. These recommendations come at the right time as AMD prepares to release its Ryzen 7000 processors, whose IHS(Integrated Heat Spreader) plate is a bit unusual.

There is no need for us to comment further on the image published by Noctua. It speaks for itself and highlights several methods of applying the thermal paste depending on the shape and size of the processor. So, very logically, you will not have to apply the paste in the same way on a Ryzen 7000 in AM5 and on a Threadripper in TR4. After that, of course, you can do as you wish, but at least Noctua will have warned you.