Until now, the Ryzen 7000 series were rather expected for September or even October.

Announced by AMD several years ago, the "Raphael" processors will follow on from the "Vermeer" range released almost two years ago. Two years that have been used by AMD to review in depth the architecture of its chips, but also and more broadly the platform (AM5) to accompany these new processors. Also known as Ryzen 7000 series, the "Raphael" processors have been mentioned several times for the end of the year without confirmation from AMD.

No more confirmation today even though the source of the information is quite official. It is indeed AMD itself that promotes a presentation that will take place during the " Meet The Expert " event. Held in Taiwan on August 5, the event will feature multiple presentations, including one focused on the new X670 Extreme and X670 chipset-based motherboards. You may not know it, but these two chipsets will be at the heart of the most high-end motherboards on the AM5 platform, i.e., for the Ryzen 7000 series. 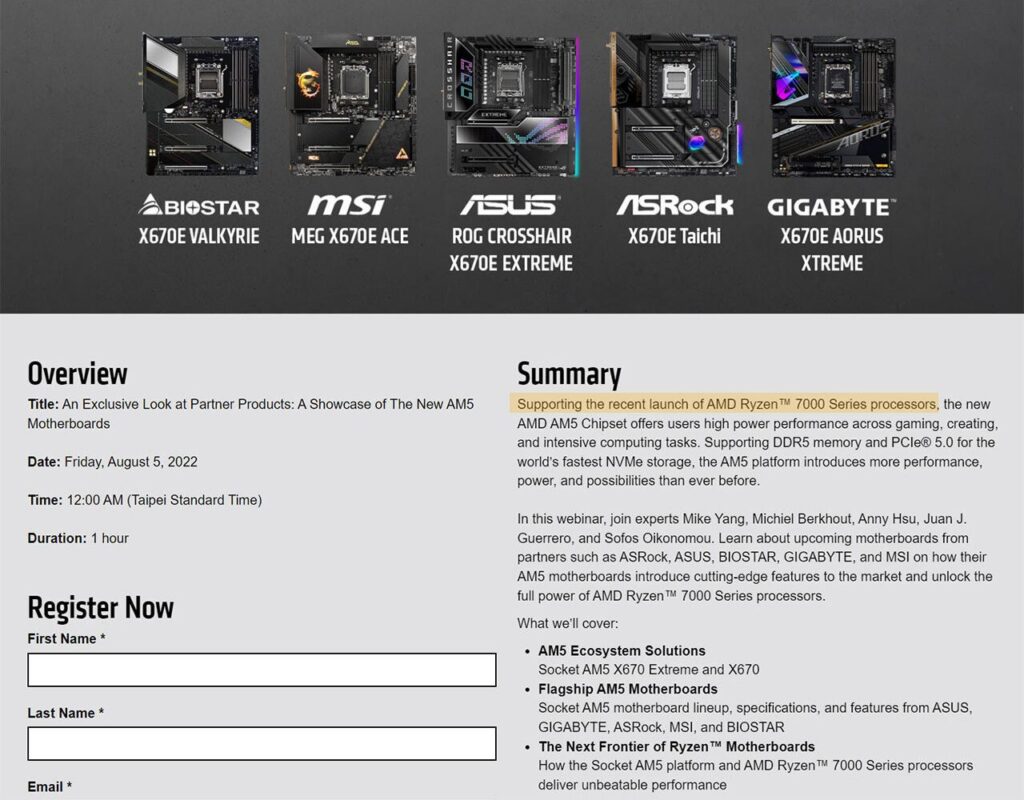 AMD is even more precise in the description of its presentation since it is specified that it is "to support the recent launch of AMD Ryzen 7000 series processors ". Even if you are the least candid of observers, it is difficult not to understand that the said CPUs will be distributed before this presentation. In fact, one could estimate that AMD plans to launch the Ryzen 7000 series in the first week of August... unless, of course, it's an error in the presentation description.

However, the fact that this is the way to present X670 Extreme and X670 motherboards from partners such as ASRock, ASUS, Biostar, Gigabyte and MSI is not insignificant anyway. Even though the Ryzen 7000 series processors will not be available in early August, it is likely that they will be launched well before Intel's new generation: the announcement of the Raptor Lake CPUs is not expected, in the best case, before September 27-28 at the Intel Innovation event. AMD would like to take the wind out of the sails of its long-time competitor, but it wouldn't do it any other way..