With the M2, Apple signs a processor with an unbeatable performance/watt ratio In November 2020, Apple presented the result of many years of research and various tests. The Apple M1 materialized the will of the Cupertino company to innovate in the world of the processor in order to leave its dependence on Intel. Apple took the opportunity to completely review its approach to the processor by changing its architecture in order to offer a much better ratio between performance and power consumption. The M1 was a great success, which logically pushed Apple to continue in this direction. 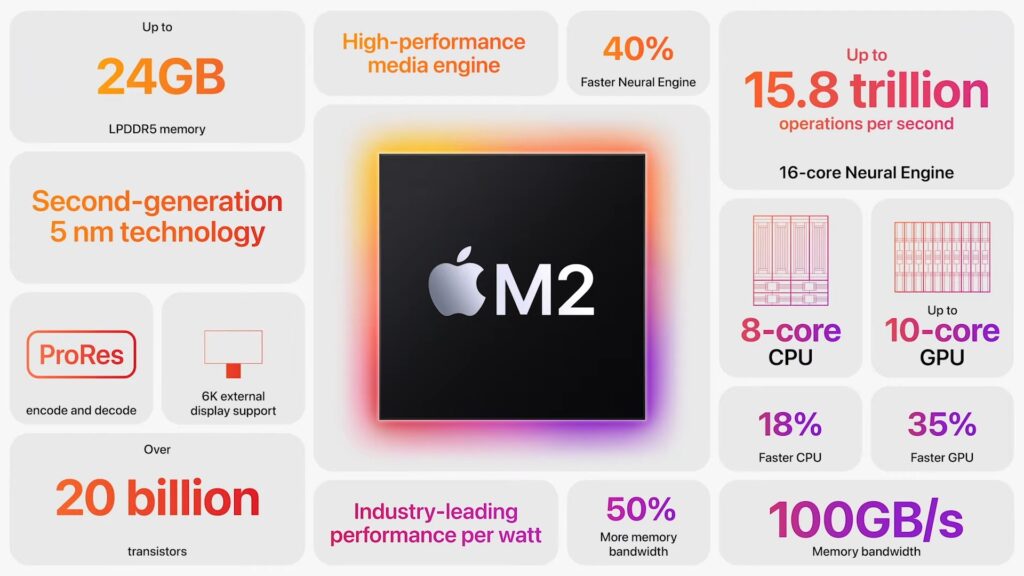 On June 6, Apple pushed the nail in the coffin by presenting the M2 chip at the Worldwide Developers Conference (WWDC) 2022. Logically, the new SoC takes all the good ideas of the M1 and the ARM architecture, especially the concept of BIG.little, which combines high-performance cores for the heaviest work and efficient cores for secondary tasks. As a result, the Apple M2 has 4 so-called "Avalanche" cores for performance and 4 "Blizzard" cores for energy efficiency. The M2 is also distinguished by solid graphics improvements with a maximum of 10 GPU cores when the M1 could only go up to 8. Finally, the M2 takes advantage of more RAM (24 GB against 16 GB on the M1) with a bandwidth 50% higher than the M1 (100 GB / s).

After this presentation where Apple did not mince its words, we were eager to learn more about the real performance of the chip. The Youtube channel Hardware Unboxed was one of the first to put its hands on this M2 through the testing of a complete configuration. A lot of measurements were made to determine what the M2 really has in store, even if a test like Shadow of the Tomb Raider suffers from not being optimized for the chip. This is a problem that affects video games in general: few titles are optimized and it is necessary to go through a form of emulation that does not logically allow the M2 to express its full potential. 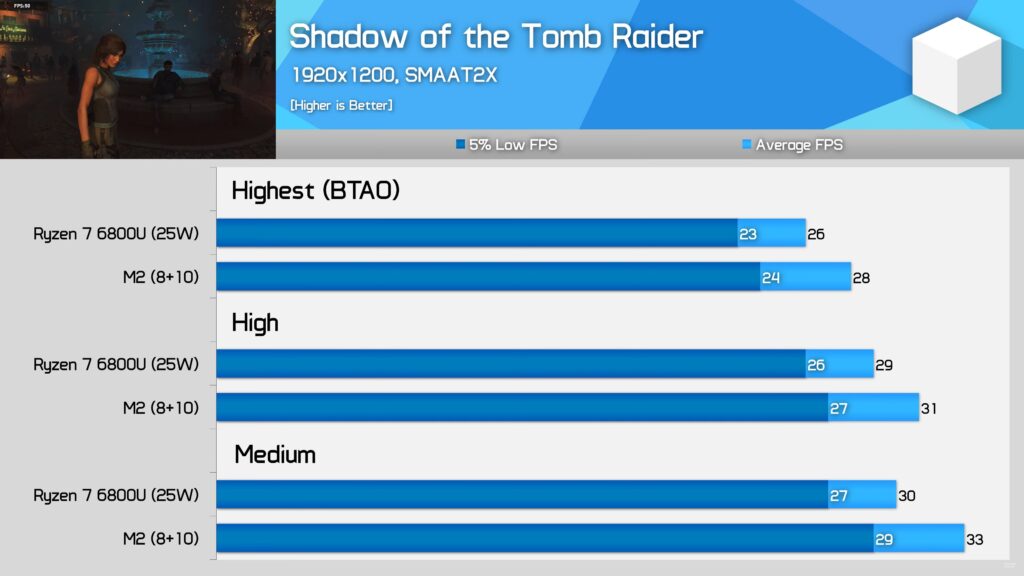 However, the M2 already shows interesting performances and even if we don't want to compare its graphics solution to a dedicated GeForce RTX card, Apple's chip wins its duel with the AMD Ryzen 7 6800U, which is already a good APU. Thus, on Shadow of the Tomb Raider, in 1900 x 1200, we gain a few frames per second, which amounts to an increase of about 7 to 10% in performance. Appreciable. 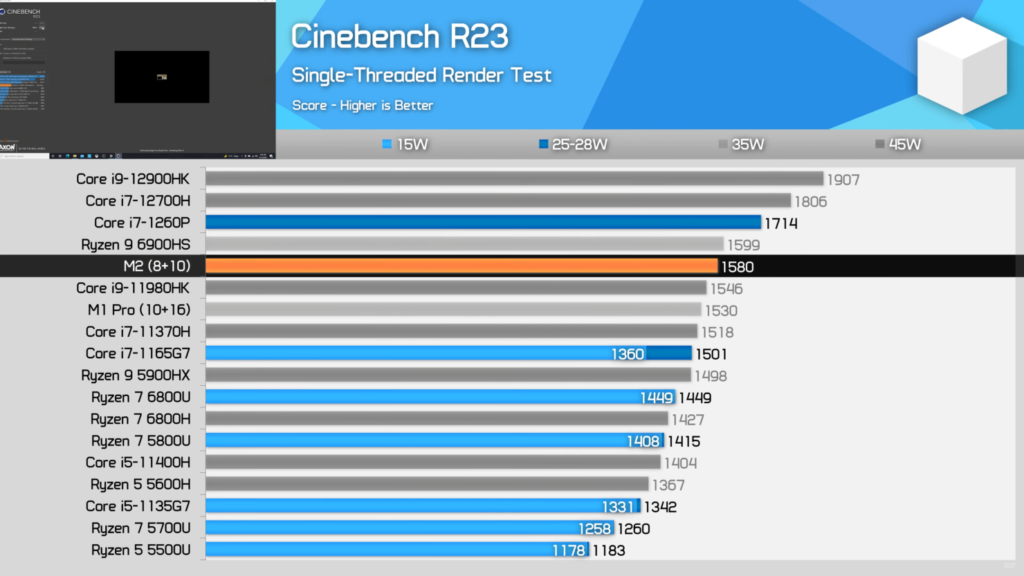 Let's keep in mind that this is only the first model of the M2 chip. Apple will most certainly offer Pro, Max and Ultra versions in the near future, as it did with the M1. Of course, in the meantime, the M2 is in difficulty on multithreaded tests compared to its predecessor in its split versions. However, the performance obtained in single-threaded tests - as in the case above with Cinebench R23 - is quite exciting. 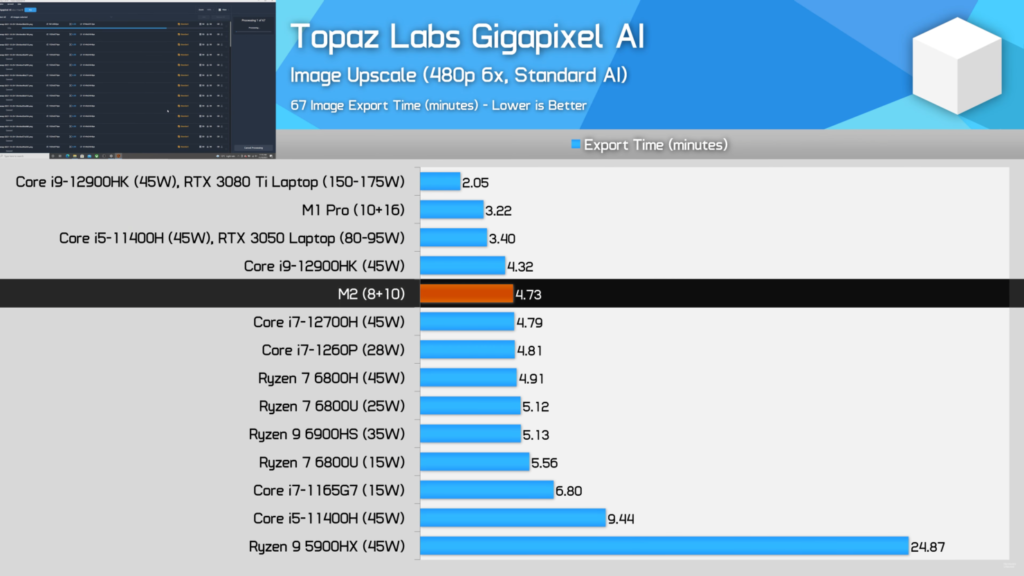 Topaz Labs' image magnification software, Gigapixel AI, confirms that even with a lower number of cores/threads than the competition, the M2's architecture and Apple's optimizations allow it to compete with an Intel i9-12900HK without having to be ashamed. The M2 is once again equipped with the Ryzen 7 6800U and wins by a very narrow margin against the Intel i7-12700H. Finally, the last test conducted by Hardware Unboxed is clearly not the least interesting: power consumption. 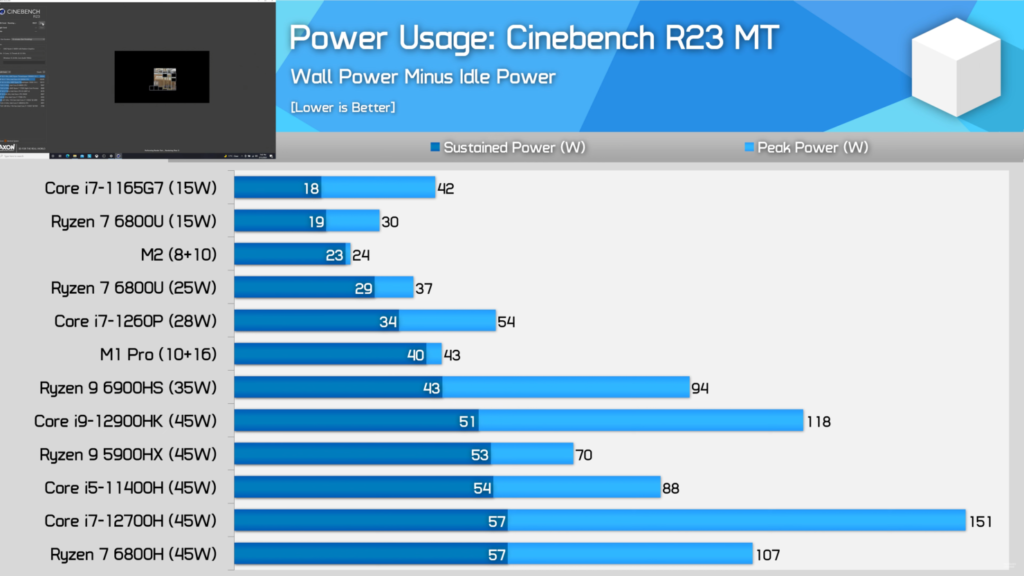 Such energy efficiency bodes well for Apple's goal for its chip: to equip the new generations of Mac Book laptops. Moreover, let's not sulk in our pleasure as the environmental - and therefore energy - challenges of tomorrow will push the industry to make ever greater efforts to achieve more economical chips.