In the semiconductor segment, China's rise to power is clear.

At present, the most powerful processors are produced by American companies. Whether it's AMD, Apple or Intel, they compete with each other without really having to fear the products of companies from the rest of the world. However, China, which is keen to develop at all levels and has been strengthened in its objectives by the renewed tensions with the United States, is seeking to free itself from this American domination of the sector and is trying to set up an industry capable of producing top-quality components.

It is in this light that we must understand the announcements made for several years already by the company Loongson. As early as 2016, the company had thus presented its work around the 3A 3000 and 3B 3000 range, processors in 64-bit architecture and manufactured in 28 nm. Today, it presents the 3A 5000 and 3C 5000 / 3C 5000L, which are based on an architecture quite similar to previous models, but show obvious progress. Thus, we talk about an engraving process in 12 nm / 14 nm, although still far from the American standards. According to the results published by Loongson, a 3A 5000 with four cores at 2.5 GHz is able to hold its own against Intel's 10th generation processors. 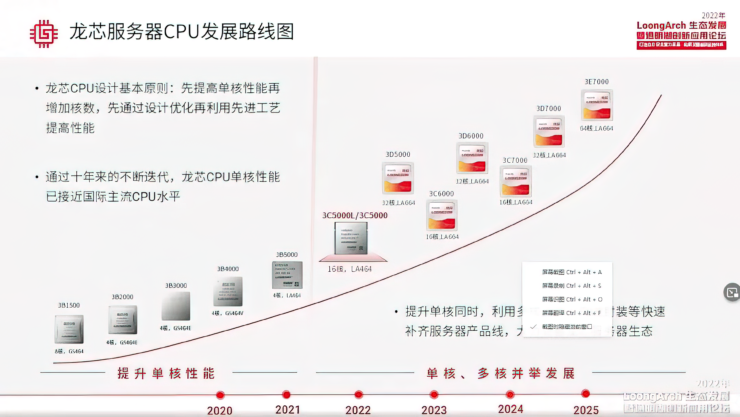 More importantly, if all goes well, next year will see the launch of the 6000 series for Loongson. This time it will be a question of considerably improving the parallelism of its chips with processors with 16 and 32 cores. Such components would then be able to offer performance similar to the Zen 3 processors that AMD has started to distribute at the end of 2020. Here again, the gap with the American giants is palpable, but we can feel it narrowing significantly.

Moreover, Loongson is particularly ambitious and hopes to be able to launch the next generation - the 7000 - during 2024-2025. For the moment, the Chinese company does not dare to make any comparison with AMD or Intel chips, but we can logically think that it will progress further and perhaps reach the same level. Let's keep in mind that Loongson makes it a point of honor to distribute its products at very attractive prices and that for the moment it only targets the Chinese market.