Graphics card market down slightly: back to "normal" prices? With volumes down year-over-year and inventories partially replenished, graphics card prices are being pulled down.

The card market has been in turmoil for almost two years now, for a variety of reasons. Regardless of the nature of the card, the problem for consumers has been to simply find a graphics card at the retailer. Secondly, for the "lucky" ones who managed to find the rare pearl, they still had to be able to invest the amount requested while the prices recommended by the manufacturers were exceeded by 150%, 180% or even 200% and even more at times.

From January onwards, several observers noticed that more and more references were regularly coming back into stock at the retailers. In the wake of this, we began to see a relative drop in prices on just about every line of graphics cards, and a study published by the Jon Peddie Research Institute seems to indicate that the trend could continue over the next few months, at least for the current generation of cards. 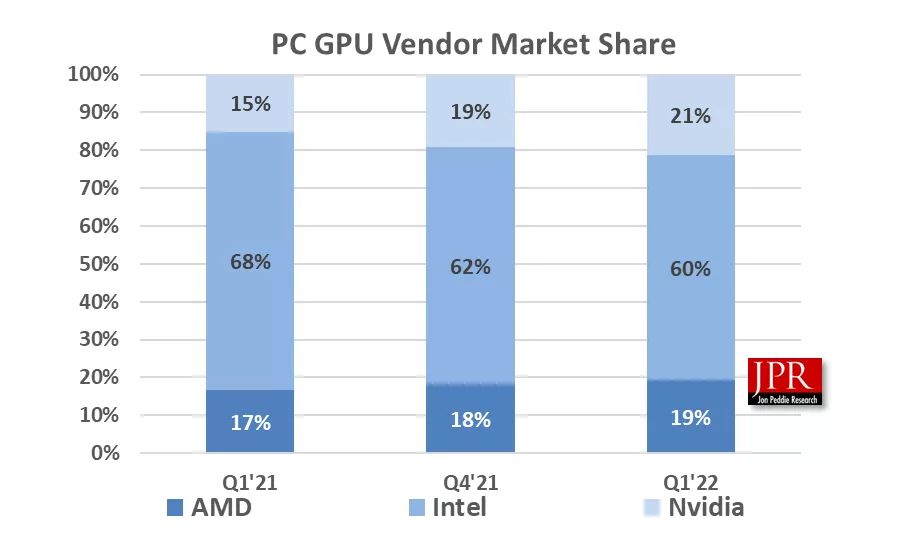 Indeed, for the first quarter of 2022, the institute mentions a drop in the number of GPUs sold worldwide compared to the same period last year: -6.2% for a total of 96 million units sold. Jon Peddie Research takes this opportunity to talk about the situation of each of the three players, AMD, Intel and NVIDIA. Traditionally the market leader, Intel is the one that has suffered the most from this decline with a drop of 8.7% while NVIDIA limits the damage with -3.2% and AMD is almost at equilibrium with -1.5%.

These figures combined with the fact that the partners of GPU manufacturers (ASUS, Gigabyte, MSI ...) have, on the contrary, recorded an increase of 1.4% of their sales over one year, allows us to say that the decline observed in general is actually related to a lower performance of the OEM market and laptops in particular. However, this drop in sales at AMD and NVIDIA confirms that the situation of Radeon RX and GeForce RTX is better than last year. Jon Peddie Research believes that prices should still be close to the current generation's suggested retail prices.