After two years of record increases, the PC market is expected to slow down (slightly) Several institutes anticipate a decline in the number of PCs sold worldwide, despite the fact that sales are still at a very high level.

The Covid-19 pandemic has led to profound changes in the way we approach work. During the various periods of confinement, imposed telecommuting sequences were implemented around the world. With the end of the restrictions, the return to face-to-face work has of course been decided in most cases, but many companies have kept telework times, some by choice, by conviction and others because of the pressure of the employees.

Teleworking, even if only partially, requires computer equipment at home and in the company. Logically, the PC market is set to soar in 2020 and 2021. After years of decline, the PC market is now back in the black and records are falling one by one. Of course, this increase in sales could not last forever and the first signals appeared at the end of 2021 with a fourth quarter down on the previous ones.

This trend is confirmed at the start of 2022, and the latest data published by theInternational Data Corporation (IDC) leaves little room for interpretation: the data published by IDC shows a drop in PC shipments worldwide of around 5.1% in the first quarter of 2022 compared to the same period last year. However, this average figure masks significant differences between brands. 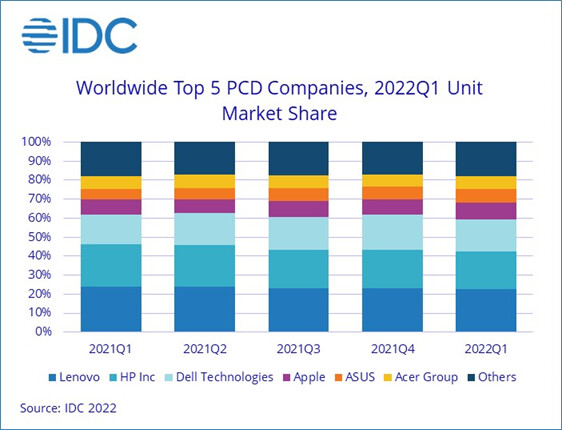 In total, IDC estimates that in the first quarter of 2022, 80.5 million PCs were sold worldwide, and while this is a notable drop from the 84.5 million machines in the first quarter of 2021, it represents the seventh consecutive quarter of 80 million-plus PC sales. Ryan Reith, vice president at IDC further states, " We've seen some slowdown in the education and consumer markets, but all indicators show that demand for commercial PCs remains very strong. We also expect the consumer market to grow again in the near future.