AYANEO Next: the new handheld console is unveiled... but without Ryzen 6000 The Next is a portable console designed by one of the specialists of the genre and which could find itself in front of the Steam Deck from Valve.

A few days before Christmas, the company AYANEO made news by teasing the release of a new portable console with an architecture very similar to our PCs. The "Next" was already the third console of the year for AYANEO, which is rapidly evolving its ranges in order to counter a major competitor, Valve's Steam Deck. The latter, which we were expecting at the end of last year, should not be released before next February. The time for AYANEO to talk about it.

When the manufacturerfirst announced its "Next", it was obviously a bit too fast and, just before the New Year, it was forced to postpone its announcement for a few days... until CES 2022 in Las Vegas opens its doors. It's now done and we were able to discover the first information about the console which has a relatively completeofficial website. Unfortunately, the discovery of the new machine is a double disappointment. First of all, AYANEO doesn't communicate neither release date nor pricing for its machine. Secondly, there is absolutely no question of having an innovative Ryzen 6000 series inside the beast, as rumors suggested. No, AYANEO is content for the Next with a Ryzen 7 5800U.

The processor is not a bad chip, quite the opposite. It has 8 cores and 16 threads. Even better, the cores in question are of the Zen 3 generation and they are equipped with a 4 MB L2 cache as well as a 16 MB L3 cache. Where things are a little more disappointing is that we were secretly hoping for a Ryzen 6000 series so that Zen 3 would be supported by RDNA 2 for the graphics part integrated into the CPU. Alas, this is not the case: the Ryzen 7 5800U is satisfied with a Radeon 8 Graphics of the Vega generation. Too bad. AYANEO specifies that the Next is equipped with 16GB or 32GB of LPDDR4X RAM at 4,266MHz and an SSD in charge of storing system and games: it is, depending on the version, 1TB or 2TB.

"Depending on the version", because AYANEO has already planned three different models of Next: the basic Next, the Next Pro and the Next Advance. This last one is a special edition which is distinguished by the presence of a signature on the back and a specific color. The two other machines will be available in four and five different colors respectively. Note that the three machines have identical dimensions (267 x 112 x 30 mm) and the weight is also the same (about 720 grams). The screen does not change either: it is a 7-inch diagonal IPS touch screen with an image definition of 1280 x 800.

Where AYANEO is quite nice is that it already broadcasts information about the power of the beast. The Next will soon benefit from an Indiegogo campaign which should allow us to know a little more, but the illustration below already allows us to see the situation and even on very recent games, the machine is doing well. Of course, you shouldn't expect to run Cyberpunk 2077 at the highest level of detail, despite the limited definition of the image: this is not a console with enough muscle for that. 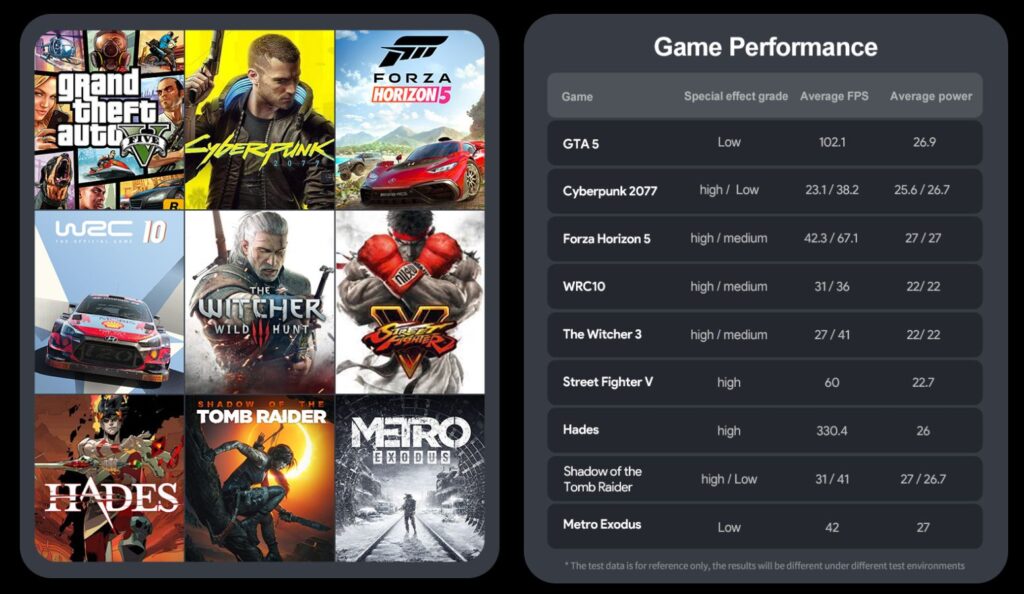