SSDs are getting faster and faster, but they are also getting hotter and hotter, which is not without its problems The upcoming release of NVMe SSDs in the M.2 format and leveraging PCI Express 5.0 could cause some real problems with heat.

Until a few years ago, most personal computers relied on a "traditional" hard drive for system and data storage. In the early 2010s, the SSD revolution arrived. SSD, for solid-state drive, is a storage unit that employs no platter or read head and relies on flash memory to hold users' data. Initially very expensive, SSDs were often paired with a "traditional" hard drive: the SSD stored the system while the data was stored on a hard drive with the same cost but 10 to 20 times the capacity. 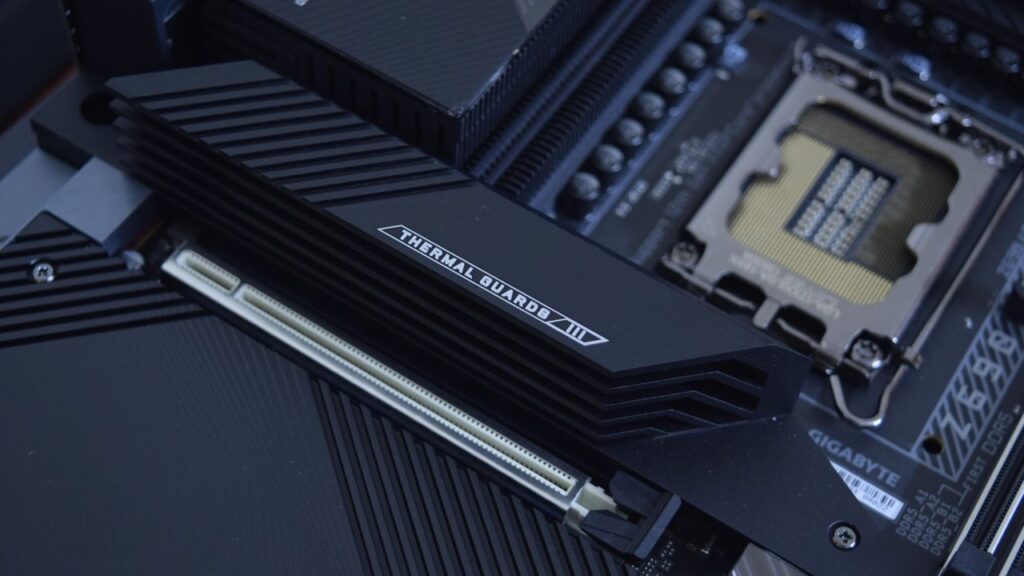 The latest Gigabyte AORUS motherboards have a thicker than usual heatsink.

Generation after generation, the cost per gigabyte of SSDs has dropped and another format has emerged. Indeed, the first consumer SSDs took the form of a classic 2.5-inch hard drive, but around 2015-2016, models in the M.2 format began to appear. Plugged directly into an available port on the motherboard - much like an expansion card or memory strip - they require no cables for either power or data transport. The problem is that while the first M.2 SSDs didn't cause much heating, the adoption of a new protocol - NVMe - and the constant increase in data rates have considerably increased the heating of M.2 SSDs.

Today, the fastest models - in PCI Express 4.0 - slightly exceed 7 GB/s, but require the installation of a heat sink. In fact, most motherboards offer at least one in order to evacuate heat and avoid the throttling effect: in order to stay under 70°C, the SSD would reduce the throughput by itself, thus reducing the interest in investing in already more expensive PCI Express 4.0 models. With its Alder Lake platform, Intel is starting to democratize PCI Express 5.0 SSDs and we ourselves have mentioned the case of SSDs with speeds of over 12 GB/s thatADATA and Samsung will present at CES 2022 in Las Vegas.

On the left, the solution offered by Josbo and, on the right, an even crazier model by ElecGear

However, such data rates will cause even more problems with overheating, and the question arises as to whether the heat sinks supplied on the motherboards will be sufficient to absorb the increased heat For some accessory manufacturers, the answer is no and Josbo has, for example, presented a new, much larger heatsink model. With a height of 7 cm, its product consists of an aluminum heatsink that makes contact with the SSD thanks to a thermal pad. The heatsink is then topped by a blower type fan capable of 3000 rpm for an airflow of 4.81 CFM. With its M11, ElecGear is offering an even crazier product, but such solutions will come at a financial cost. Perhaps even more annoyingly, they could increase the noise levels of the products: Josbo estimates them at a maximum of 27.3 dBA, but we don't have to believe him and, of course, we can also make do with PCIe 3.0 SSDs and their 3.5 GB/s data rates.