In the absence of official data published by Microsoft, the adoption rate of Windows 11 is a matter of debate.

Only a few days ago, we published a short article that showed how difficult it is to know the real adoption rate of Microsoft's new operating system, Windows 11. Available since October 5th and benefiting from the same free update system as its predecessor, Windows 11 should not have any obstacles to a massive deployment. Except that Microsoft has placed some major constraints on its adoption: to be able to install Windows 11, the PC must have a TPM 2.0(Trusted Platform Module 2.0) chip, Secure Boot in the BIOS and a sufficiently recent processor to be supported.

In fact, many users simply can't take the plunge, and this is especially true in the enterprise, where system upgrades are much slower than for home users. Some observers believe that Microsoft is facing a very slow switchover from Windows 10 to Windows 11 and, to make matters worse, we can't count on official figures that could tell us about the rate of adoption of Windows 11: Microsoft doesn't communicate anything like that.

Recently, we presented two contradictory studies which, on the one hand, mentioned 100 million machines that have already switched to Windows 11 and, on the other, an adoption rate of barely 0.21%. The first study was based on a very limited number of machines, while the second one was already suffering from its age, since it was carried out at the end of October, not even one month after the release of the new OS. Today - even if there is still a relative statistical bias - we finally have something a little more concrete. 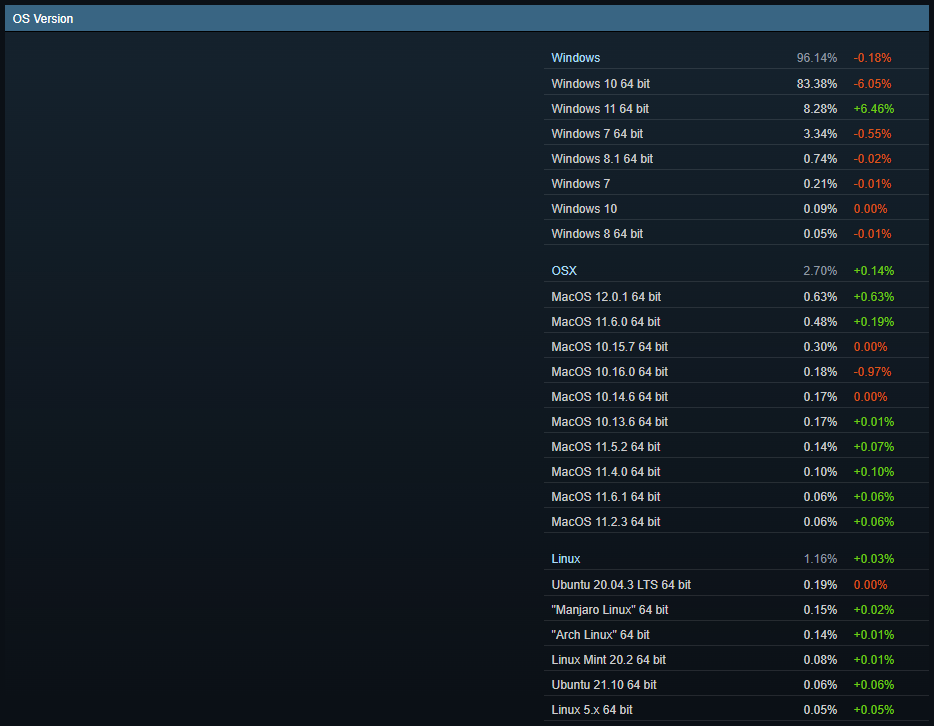 Through its November 2021 " Hardware and Software Survey," it's the video game platform Steam that sort of takes stock. The relative statistical bias is related to the fact that this survey is based on volunteering. So one could imagine that Windows 11 owners are more inclined to let it be known than others... or completely the opposite. However, according to Steam's statistics, the platform's users have quickly adopted Windows 11: 8.28% of them have already made the switch.