Windows 11: what about this DirectX 12 graphics card? Things seem to be very complicated for Microsoft and Windows 11 as there are many controversies about the hardware requirements of the future operating system.

Since June 24th and the official release of Windows 11 by Microsoft, the controversies are going on. Given the popularity of its flagship operating system, the American publisher is used to this kind of uproar, which obviously doesn't scare it. However, this time, we can consider that it lacked finesse in its communication with hardware recommendations that sometimes exclude even very expensive machines still on sale on the Microsoft online store, such as the Surface Studio 2 still sold... for a mere 4,149 euros!

Beyond the controversy related to the embedded processor on your PC and the activation - or not - of the TPM 2.0, there is another concern for many users, the issue of the graphics card. In its hardware recommendations, Microsoft has specified that it is necessary to have a graphics card " Compatible with DirectX 12 or later with WDDM 2.0 driver ". The first problem for many users is what this WDDM 2.0 driver is In reality, it's not very complex, but Microsoft could have been more educational... let's hope it will be more so by the time Windows 11 is actually released. The WDDM - for Windows Display Driver Model - is a new graphics driver model: it appeared with Windows Vista and then evolved to reach, in 2014, this version 2.0 that Microsoft is talking about. 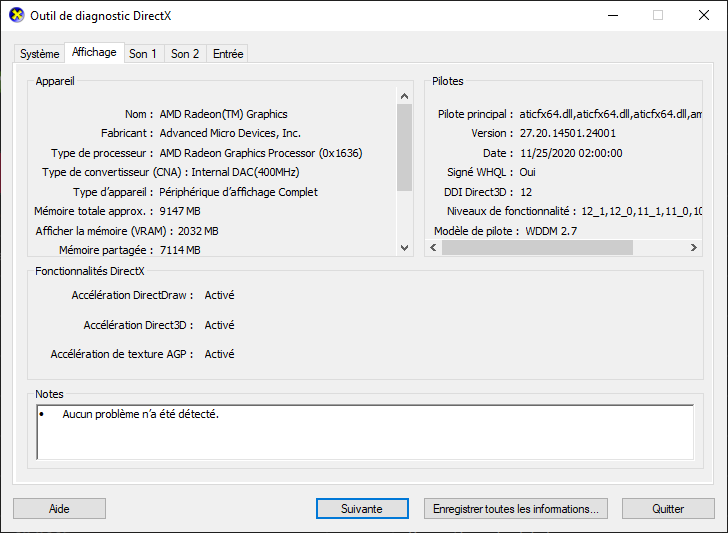 In fact, most current graphics cards have such drivers and even the graphics solutions integrated into Intel CPUs - the famous iGPUs - are often covered. To be sure, the easiest way is to use the "run" function of Windows via the shortcut Windows + R. There, you type "dxdiag" to launch the DirectX diagnostic tool. On the window, we take the tab "display" to discover the mention WDDM and the version put in parallel. If you don't have at least the famous version 2.0, you may simply need to check that your graphics driver is up to date.

Basically, Microsoft's main graphics recommendation for Windows 11 is that the graphics card should be DirectX 12 compatible, and you may be surprised to learn that many cards that have been sold for a while are. We have already mentioned the case of Intel's iGPUs that recognize DirectX 12 since the Haswell generation launched in 2013. At NVIDIA, the architectures of cards since Fermi (2009) are operational and at AMD, DirectX 12 has been adopted since 2012 and the release of the Radeon HD 7000 series or APUs from the A4. However, the problem should not be overlooked and in the manner of what it seems to do with processors, Microsoft gives the impression of "pushing for consumption" by recommending more modern graphics cards than necessary: Windows 10 actually runs well on older GPUs and not in the least certified DirectX 12. The future will tell us quickly if the editor changes his mind in the face of discontent or waits patiently until the computer population evolves in his direction.