ARM v9: the next generation ARM with 3 CPUs and 4 GPUs After the presentation of its new architecture - v9 - a few weeks ago, ARM takes stock of what's new in Cortex CPUs and Mali GPUs.

While it is still "entangled" in the NVIDIA takeover, the British company ARM continues to innovate more than ever for the happiness of our future smartphones. A few weeks ago, ARM unveiled its new architecture with several objectives in mind. It will of course be a question of innovating on the side of the performances while optimizing still a little more the power consumption, but ARM puts also the accent on the security, the machine learning and the ray tracing.

The v9 architecture is first of all available in CPUs, the main cores found in SoCs - " system on a chip " in French - which are then used in smartphones and tablets in particular. ARM is not going in with the spoon as it renews the majority of its products to make them evolve. Thus, we will first have the right to the Cortex-X2 heart to replace the Cortex-X1, a heart focused on performance. The objective here is to boost the latter in order to offer " the most powerful processor to date" according to the company spokesman. ARM evokes performances superior to 30% compared to what we can obtain on the flagship smartphones of today and compared to the Cortex-X1, the Cortex-X2 would be able to go until +16%. To do this, ARM mentions an exclusively 64-bit core, a better organized and shorter pipeline and an AArch64 optimization. 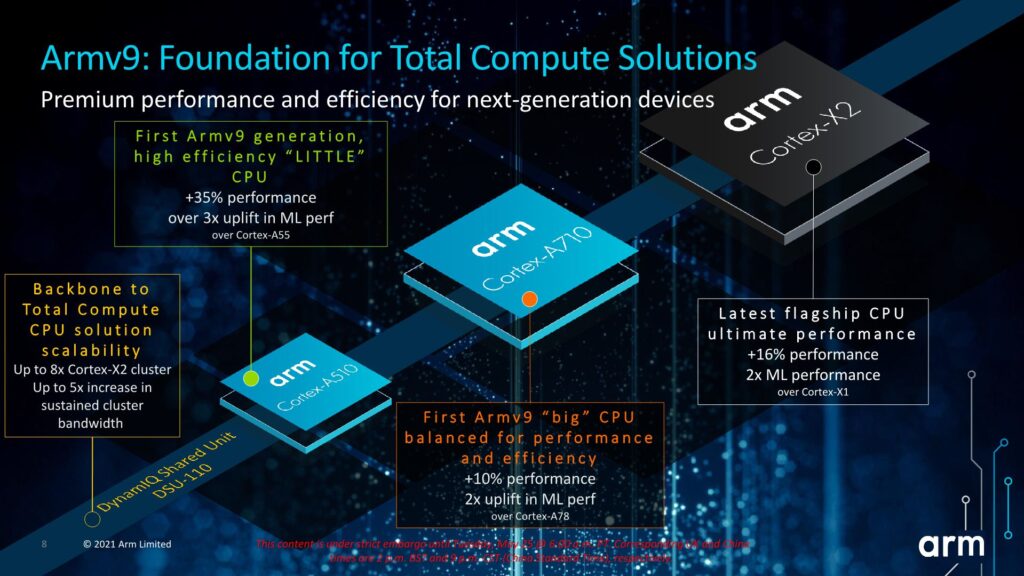 The big.LITTLE organization - which mixes powerful cores for performance and more economical ones for essential functionality - is the basis of ARM SoCs, so it makes sense for the British company to continue along this path. The Cortex-X2 is the most powerful of the "big" cores, but ARM also has, to a lesser extent, the Cortex-710, which replaces the Cortex-A78: there is talk of improving performance by about 10%, while the optimizations made to the power consumption can reduce it by about 30%. The "LITTLE" part is entrusted to the Cortex-510, which replaces the Cortex-A55: this time, we are talking about a 35% increase in performance for a 20% reduction in power consumption. ARM's big.LITTLE organization is relatively flexible, allowing various mixes between the eight maximum cores it tolerates. 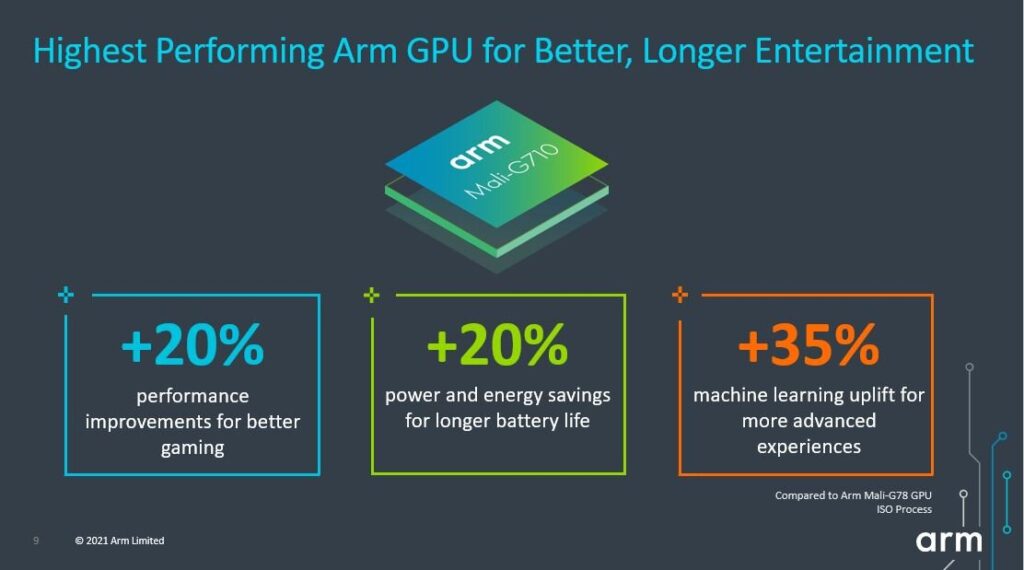 In addition to its CPUs, ARM has obviously reviewed the graphics aspect of its solutions, it has redesigned its GPUs. We are talking about four new models and we will start with the Mali-G710 which replaces the Mali-G78 on the high-end. The performance should increase by 20% and even 35% on machine learning while power consumption drops by 20%. More importantly, the Mali-G710 will be very flexible since it is possible to choose a configuration with 7 to 16 shader cores for more or less power. Note in passing that this variation in the number of shader cores is also the reason for a change in name. If only 1 to 6 shader cores are retained, ARM prefers another name: it names its GPU Mali-G610 to better segment its lines.

The Mali-G710 is ARM's most powerful GPU, but for less high-end smartphones, the British company also updates its lower ranges. Thus, the Mali-G510 replaces the Mali-G57 to offer a remarkable leap in performance: ARM actually speaks of +100% while consumption is significantly reduced (-20%). A real feat. That said, the thing is even more impressive on the entry level. The Mali-G310, which replaces the Mali-G31, is indeed the first " low-cost " GPU taking advantage of the Valhall architecture. This allows it to boost its performance in the management of textures (x6) or on the Vulkan library (x4.5). These new ARM solutions should not be released immediately, but the first devices equipped could arrive early next year with a wide variety of products involved from smartphones to tablets through connected TVs, multimedia boxes ..