A new organization of the CPU cache allows the latter to be tripled for better performance.

From June 1 to 5, 2021, the Computex in Taiwan will be held - albeit remotely. This is one of the most important computer events in the world and, of course, all manufacturers have things to unveil there. Rather than dwell on the presentation of a particular product, we would like to go back to the announcement made by AMD around its " Ryzen 9 5900X V-Cache ". Lisa Su, AMD's CEO, did indeed "take the stage" to unveil a new CPU, but there was no mention of a new architecture.

Released last fall, the Ryzen 5000 series is a powerhouse that gives AMD the edge over its long-time competitor, Intel. However, AMD is not resting on its laurels and through a modification that looks like nothing, it has further boosted the performance of its small chips. This Ryzen 9 5900X V-Cache is architecturally identical to the Ryzen 9 5900X that has been distributed for several months now. It is still based on a 12-core Zen 3 / 24 threads structure. Aesthetically too, it looks very similar, but AMD has managed to triple the amount of L3 cache memory integrated into its CPU. 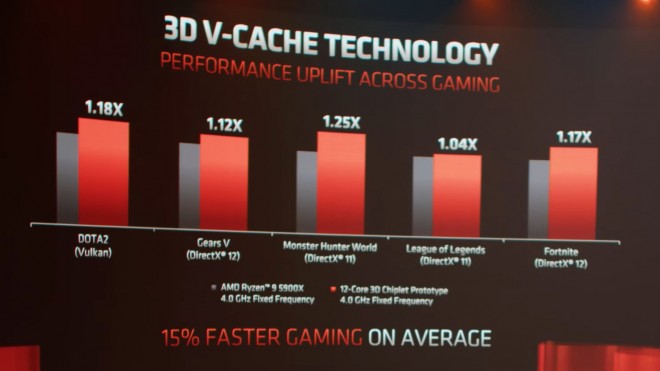 The Ryzen 9 5900X V-Cache actually adopts what the American company calls a 3D Vertical Cache. The idea, quite simple, is to integrate more L3 cache by superimposing it on top of the CPU die. Without changing much in the design of the CPU, AMD is able to add 64 MB of L3 cache to the 32 MB that the Ryzen 9 5900X already had. As you can see on the slide above, the increase - even the tripling - of the L3 cache has a direct impact on performance: AMD took the example of several video games with gains around 15%. That's pretty good news considering that the technical changes seem to be really minor.