It is rumored that these desktop processors designed around the Zen 5 cores would be codenamed Granite Ridge / Strix Point.

The multiple successes of the various Ryzen processor lines have propelled AMD to the forefront, to the point that every announcement, every rumor, every bit of information is analyzed and dissected by specialists. The latest news is not about the Zen 4-based processors, but about the next generation, the ones with Zen 5 cores. According to TechPowerUp's information, there will be at least two lines: on the one hand, desktop CPUs codenamed Granite Ridge, and on the other hand, APUs codenamed Strix Point, whose exact purpose is unknown. 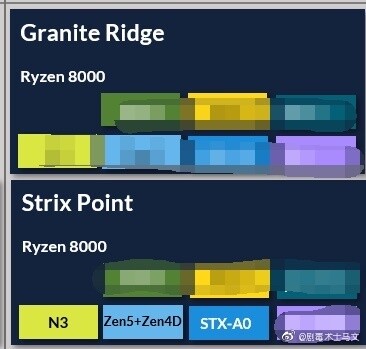 In either case, we are dealing with Ryzen 8000 series processors, but whereas a CPU is a pure calculation unit without any graphics solution, an APU is distinguished by the presence of an integrated graphics circuit so that it is not necessary to associate a dedicated graphics card to have a fully functional machine. For several years now, AMD has specialized in marketing richly endowed APUs, capable of running - albeit modestly - even relatively recent video games. In this respect, it is clearly ahead of its rival, Intel.

The Ryzen 8000 series - whether Granite Ridge or Strix Point - should therefore benefit from Zen 5 cores and a 3nm etch, while the Zen 4 cores will inaugurate the 5nm etch. However, it is still far too early to give a precise timetable. The latest news is that Ryzen processors based on Zen 4 cores could arrive in the second half of 2022. Logically, the Ryzen 8000 in Zen 5 would not be expected for a few more months: perhaps during 2023?