Still little known in France, the American company Sabrent is very involved in the development of SSDs with ever more impressive capacities.

For some years now, Sabrent has been offering high-quality SSDs and, in order to make a place for itself in the sun, it has combined them with particularly attractive prices or ever-increasing capacities. It was among the first to provide the "general public" with an M.2 model with a capacity of 8TB: if we put quotation marks, it is because such a beast costs more than 1,500 euros, drastically limiting the potential target. More recently, a persistent rumor indicates that Sabrent could be developing a SATA SSD with a capacity of 16 TB. That's just about all!

Such a capacity would be a record of sorts for an "affordable" product, but in reality, Sabrent wants to go much further with an item called the Rocket Q Battleship. It is indeed an expansion card in PCI Express format that integrates a whopping eight M.2 SSD ports in the NVMe standard. The idea is to be able to add up to 8 Rocket Q SSDs and thus have a storage capacity that is quite staggering for a device of this type: 64 TB. 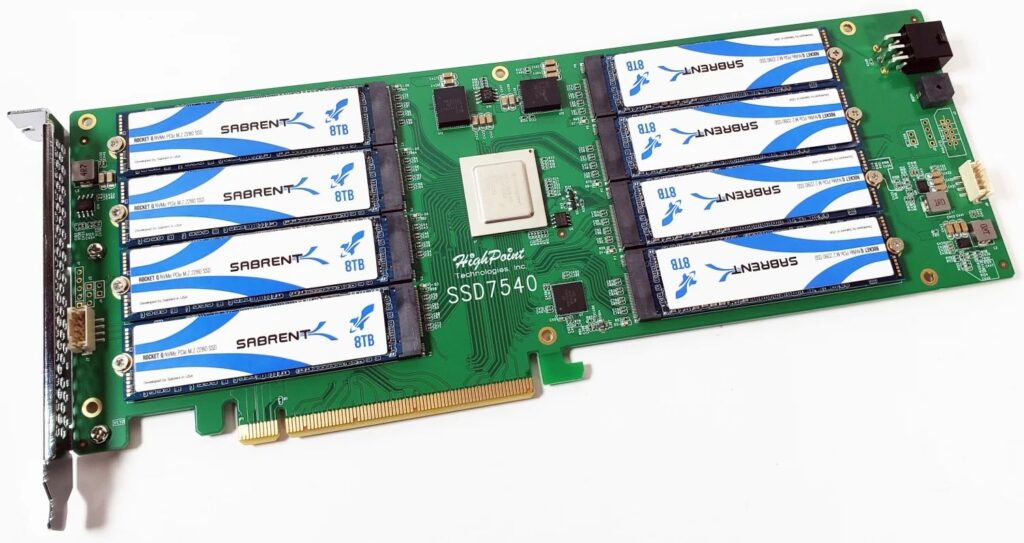 The Rocket Q Battleship obviously leaves nothing to chance and if we are to believe the rare pictures of the beast, it integrates an imposing heatsink topped by two fans to cool down the NVMe SSDs which have a tendency to heat up on the latest developments. The question of power supply is also interesting insofar as the PCI Express port is unable to feed such a product: Sabrent has therefore equipped it with a 6-pin PCIe socket. However, we don't have any information about the price of this toy and we don't even know if Sabrent really intends to sell it or if it's just a technology showcase to highlight its know-how.