The next generation of Intel processors not as powerful as expected?

While their release schedule is still unclear - there is talk of late February, late March - the next Intel processors are at the heart of a controversy related to their supposed performance.

For many months now, Intel has been preparing its communication around the launch of the Rocket Lake-S range, its 11th generation processors for desktop computers. If the American company is observed at each of its launches, it is now scrutinized even more because it must now respond to the launch - thundering - of the Ryzen 5000 series last October by its competitor AMD. For the first time in a long time, AMD seems to dominate Intel in the application field, but also in the gaming field. 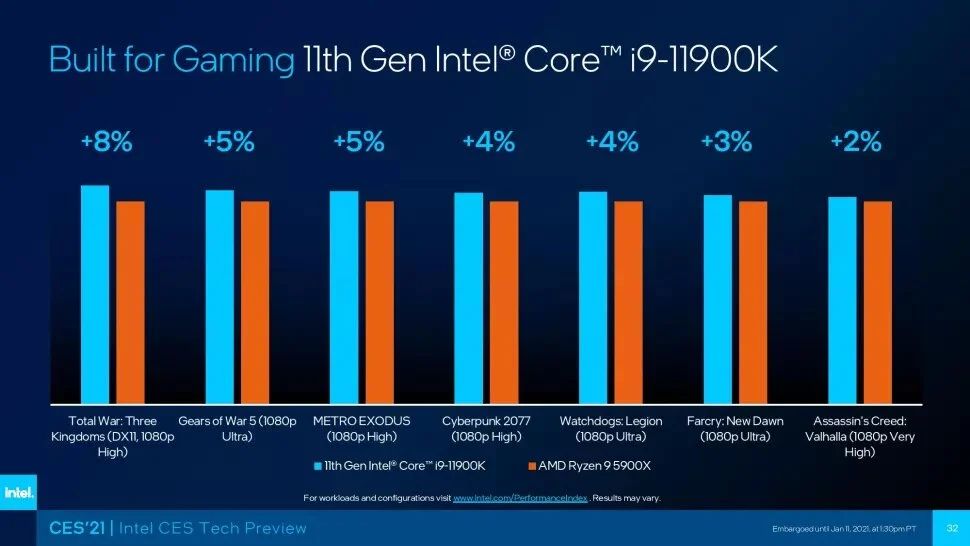 Logically, Intel was forced to respond and as its products are not yet on the market, it did so by means of a press conference organized during the CES in Las Vegas. There, Intel compared the in-game performance of the Ryzen 9 5900X to its upcoming flagship, the Core i9-11900K. Considering the low number of frank innovations on this Rocket Lake-S, we could not expect miracles, but the presentation was reassuring: as you can see on the slide above, in all cases, the 11900K won over the 5900X, even if the gap was sometimes small.

However, a few days later, a Chinese website published a video (above) opposing the 11900K to the previous flagship of the brand, the 10900K, and for Intel, things get more complicated. Indeed, in most cases, the 10900K is simply more powerful. On CPU-Z, during the single-core test, the 11900K is quite clearly the winner, proof that the optimizations mentioned by Intel are real. On the other hand, as soon as the tests involve multi-threaded applications, the 10900K takes the lead, sometimes by a wide margin. Intel has decided to market its new Rocket Lake-S with "only" 8 cores / 16 threads when the 10900K had 10 cores / 20 threads: the Rocket Lake-S optimizations do not seem to be enough to compensate for this reduction in performance. We are obviously waiting to learn more because if the test presented by the Chinese site raises many questions, it is necessary to be cautious: the test conditions are not very clear.