So the rumors were true and NVIDIA chose an entry / mid-range card over a high-end announcement.

While this year's CES in Las Vegas is a virtual event, that didn't stop NVIDIA from making news. A few months after the launch of its new range of GeForce RTX 3000 series, the American company continues its momentum. First there was the RTX 3080, followed 15 days later by the RTX 3090. About a month later, the RTX 3080 was released and a few weeks later, the RTX 3060 Ti. Today it is the turn of the RTX 3060.

The last one should logically be close to the RTX 3060 Ti while being significantly cheaper, more accessible. NVIDIA mentions prices starting at 329 dollars, but we all know that this will obviously depend on the partners of the American and the actual availability of products. Still, the RTX 3060 should offer a good power to price ratio. It is equipped with 3,584 CUDA cores, 25 RT cores and 101 Tensor cores, each time a little less than the RTX 3060 Ti.

NVIDIA seems to answer some critics by mentioning the presence of 12 GB of GDRR6 memory ... although it is rather on the model RTX 3080 that the amount of video memory seemed a little short. Note that with the RTX 3060, NVIDIA reduces the interface of this GDDR6: the bus goes from 256-bit to 192-bit. Finally, the RTX 3060 should operate at frequencies between 1.32 GHz and 1.78 GHz. In the end, NVIDIA mentions a power of 13 TFLOPS where the RTX 3060 Ti reaches 16.2 TFLOPS. 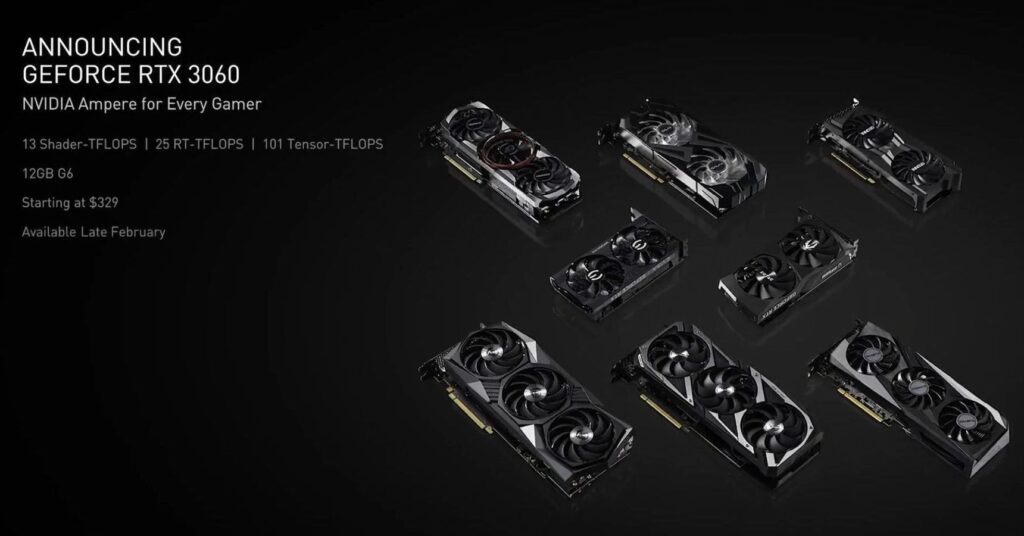