CAMM memory to replace SO-DIMM in our laptops In particular pushed by Dell, CAMM memory seems to cumulate several advantages to impose itself.

Acronym of small outline dual in-line memory module, the SO-DIMM seems to have always been part of our lives as laptop users and it's true that on the personal computer scale, it seems to have been around since the dawn of time. In fact, it was during the 1990s that the switch from SIMM to DIMM took place and with it the emergence of SO-DIMM. Indeed, DIMM memory arrays were too long and therefore too bulky to fit into laptops that all manufacturers were trying to make as small as possible. Logically, the SO-DIMM appeared and then followed the evolutions of its big sister to go from SDR to DDR and then, from one new product to another, to DDR4 and DDR5... but this is perhaps where the story will end for DIMMs that some manufacturers no longer seem to have in the odor of sanctity 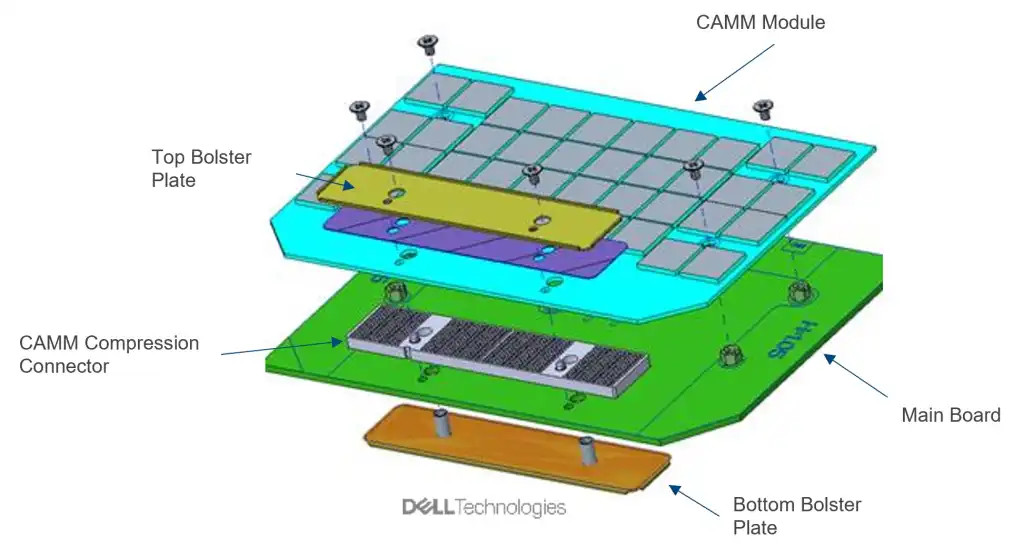 Thus, the American Dell has been pushing for a few months now for the introduction and the generalization of a new format, the CAMM, for compression attached memory module. A new RAM format that Dell is already using in some of its laptops and that it is trying to have adopted by the whole industry. According to Thomas Schnell, an engineer at the American company interviewed by PC World, the matter seems to have been decided. The chief engineer explains that the organization in charge of validating new developments in RAM, the JEDEC, is about to validate the CAMM 1.0 specifications. A validation which passes by the approval of the very numerous members of the organization (more than 200 companies of the sector) but which should intervene before the end of the year 2023, if we believe Dell.

The American is all the more confident that the CAMM format cumulates all the advantages... if we believe the words of Thomas Schnell of course. According to him, the SO-DIMM is about to reach its technical limits and the release of DDR5-6400 would be in a way the song of the sign of this format. On the contrary, CAMM would allow to go much further thanks to a new format able to increase significantly the memory density of the kits produced. In the same way, CAMM would allow to go higher in operating frequencies and, to those who fear the emergence of a new proprietary format, Thomas Schnell explains that: " Dell is a huge company, we don't keep the lights on because we receive royalties for a patent [ ...]. We basically want to recoup the cost of inventing it and implementing it " before adding, " We are part of the PC industry, and the PC industry is built on an ecosystem of partners [and] suppliers that power everything [...]. Yes, Dell does its own innovation in its systems, but we also incorporate a lot of innovation from a lot of people."