Intel brings its 13th generation processors to the mobile segment In total, the arrival of Raptor Lake on our future laptops translates into the announcement of 32 new processors. That's all!

Unlike its "little buddies" AMD and NVIDIA, Intel did not want to hold a press conference or even broadcast a video in the run-up to CES 2023 in Las Vegas. No, for the American firm, it seemed sufficient to publish a few press releases and some illustrations. However, Intel did have some news to present, starting with the arrival of its 13th generation of processors - the famous Raptor Lake - in laptop versions. This arrival translates into the announcement of four families of processors that we will detail from the most powerful to the most energy-efficient, of course. 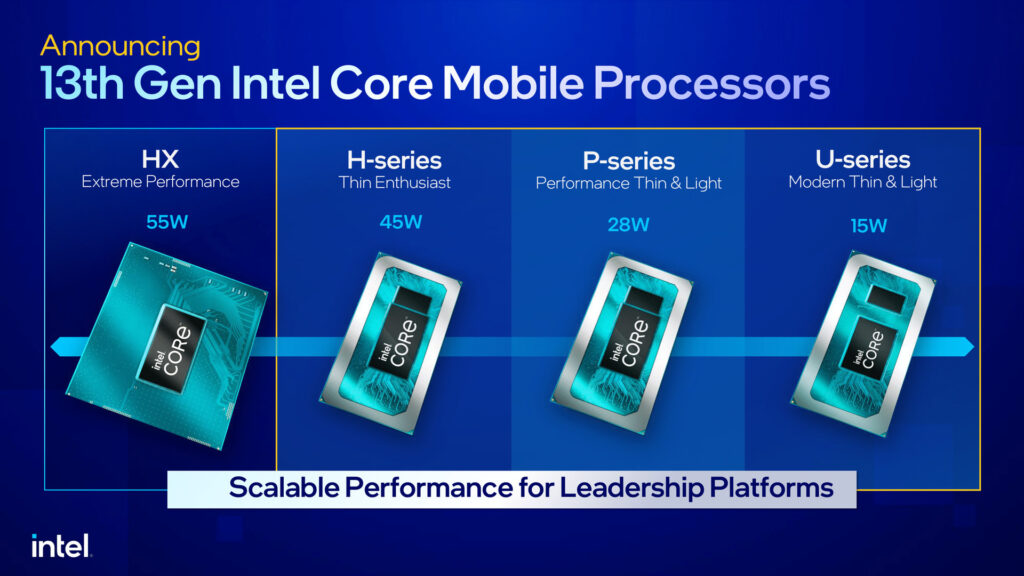 So, first of all, Intel plans to distribute the HX-Series processors for chips that are finally very close to the Raptor Lake desktop that it launched a few months ago. As you can see on the slide below, we are talking about a total of 9 processors divided into three sub-categories. First of all, there are three Core i9s with, at the top of the list, the Core i9-13980HX and its 8 efficient cores / 16 efficient cores. It has a total of 32 threads and 36 MB of L3 cache for frequencies of 2.2 GHz base and 5.6 GHz boost. The next sub-category is the Core i7 with, first and foremost, the Core i7-13700HX. We are talking about 8 efficient cores and 12 effective cores for a total of 28 threads. The L3 cache amounts to 30 MB while the frequencies reach a maximum of 5.3 GHz. Finally, on the side of the three i5s, the most powerful is the Core i5-13600HX with its 6 powerful cores and 8 efficient cores for a total of 20 threads and 24 MB of L3 cache. Here we are talking about a maximum frequency of 4.8 GHz. All these processors have a Processor Base Power (PBP) of 55 Watts and a Max Turbo Power (MTP) of 157 Watts. 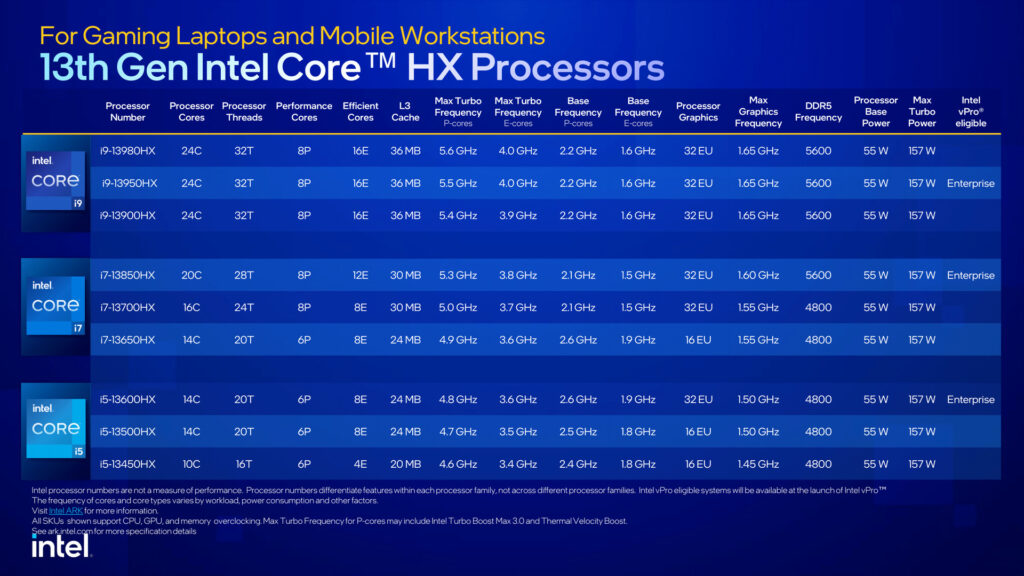 Logically, the H sub-category is even less energy consuming. We are talking about a PBP of 45 Watts and an MTP of 115 Watts for the most powerful Core i7 and Core i9 processors. On the other hand, the MTP is limited to 95 Watts on the Core i5. In total, we can count on a range even richer with 11 processors Series-H. Let's focus on the strongest in each category, with the Core i9-13900HK at the top of the list, which still has 6 powerful cores and 8 efficient cores, i.e. a respectable total of 20 threads. The L3 cache is measured at 24 MB, while the operating frequency is 2.6 GHz as standard, reaching a maximum of 5.4 GHz when boosted. These values are very similar to those of the strongest Core i7, the 13800H. The latter is simply distinguished by its lowered frequencies: 2.5 GHz in base and 5.2 GHz in boost. Finally, the number of cores has been reduced on the Core i5-13600H, which has 4 high-performance cores and 8 efficient cores for a total of 16 threads. The L3 cache is 18 MB and operating frequencies of 2.8 GHz / 4.8 GHz. 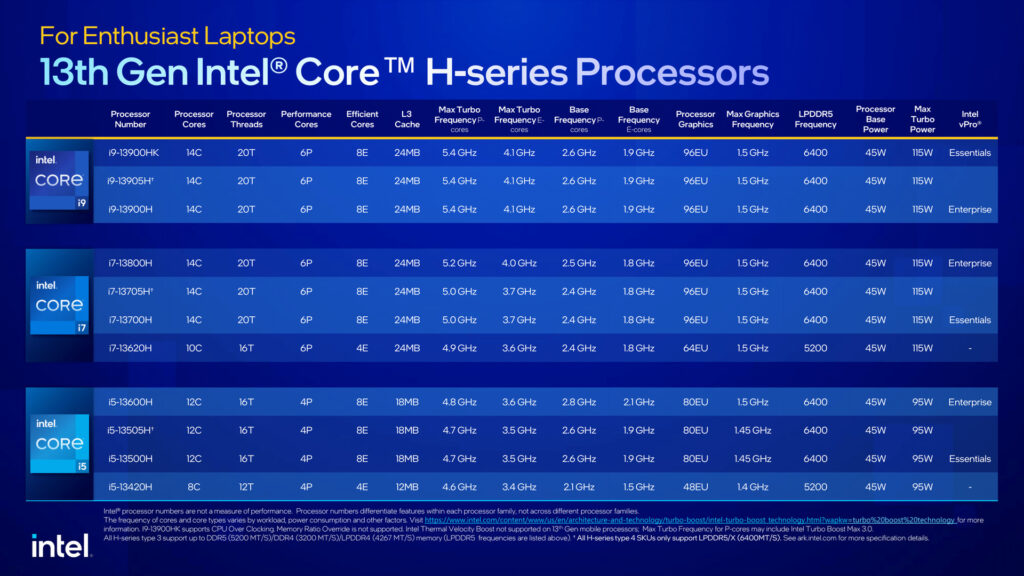 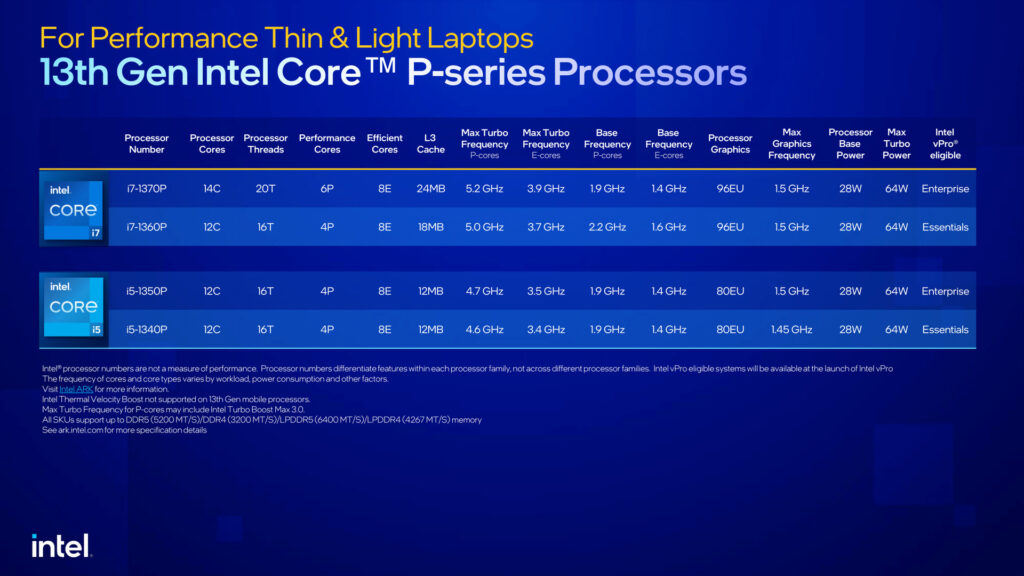 That said, it's amusing to see that Intel has some reserve and that despite their already very low power consumption, these P-Series processors are not the most economical. This Raptor Lake generation does have a fourth family, the U-Series, which has a PBP of only 15 Watts and an MTP that is even lower at only 55 Watts. Here, however, the range is more extensive than for the P-Series, with a total of 8 processors. We will remember that these processors clearly weaken the Raptor Lake proposal with only 2 powerful cores on the "strongest" models and even more than one on the others. The reduction is also visible on the efficient cores, which sometimes drop to only 4. This is probably the price to pay for ultra-low-power processors whose operating frequency can still climb to 5.2 GHz - on the Core i7-1365U - when the need arises. 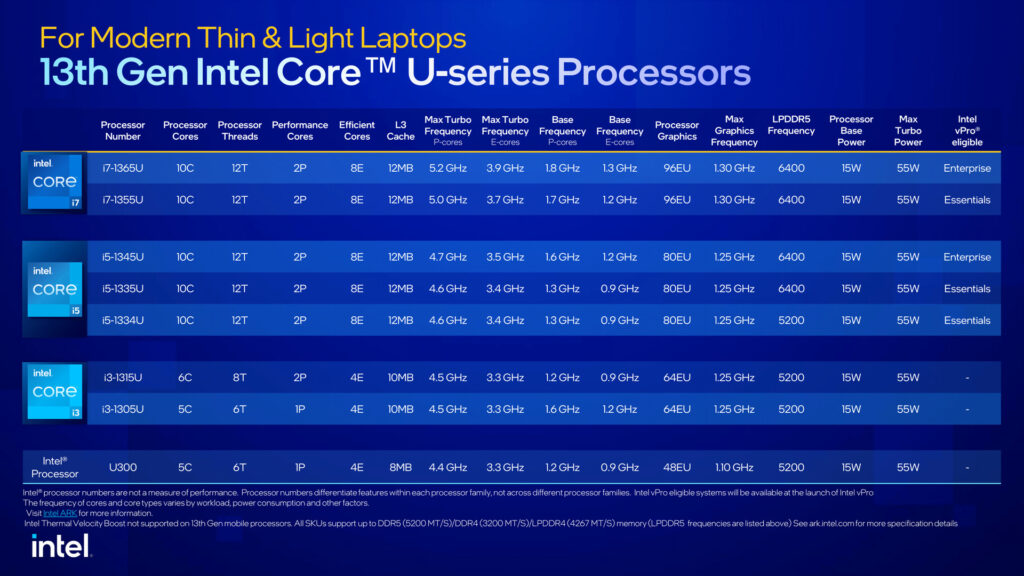