With the support of the Taiwanese government, TSMC is preparing to build the world's most modern and expensive semiconductor plant.

As you can see from the very interesting graph below, in 2002-2003, the world could count on nearly 30 specialized companies to supply the latest semiconductors. At that time, only 130 nanometres were available, and among the companies capable of such a work, there were American companies, of course, but also European, Japanese, South Korean or Taiwanese ones. Thus, next to well-known names such as IBM or Texas Instruments, there were less famous companies such as Freescale or Rohm and, as you can imagine, the future market tenors such as Intel, Samsung and TSMC.

Over time, the engraving has been refined to allow for ever smaller transistors. On the same wafer, it is then possible to place many more transistors and, for the same chip size, more chips. The fact remains that components have become more complex, and rather than producing more of them, wafers are used to produce richer ones, integrating more and more functions. In just a few years, we have gone from 130nm to 90nm (2004-2006), then to 65nm (2006-2008) and to 45/40nm (2008-2012). In fact, in less than ten years, the number of companies capable of producing the most modern chips has shrunk considerably.

We were talking about 26 companies at the cutting edge in 2004-2006, but only 14 in 2008-2012. On the 32/28nm node, which is spreading between 2010 and 2012, there are even only 10. Two years later, there were even fewer (7) and even a giant like IBM dropped out. In 2014-2016, at the advent of 16/14 nm, only 6 companies are able to produce the precious components: GlobalFoundries, Intel, Samsung, SMIC, TSMC and UMC. Today, when we talk about 5nm engraving, three companies share the cake: Intel, Samsung and TSMC. Three companies that invest massively to modernize their factories. 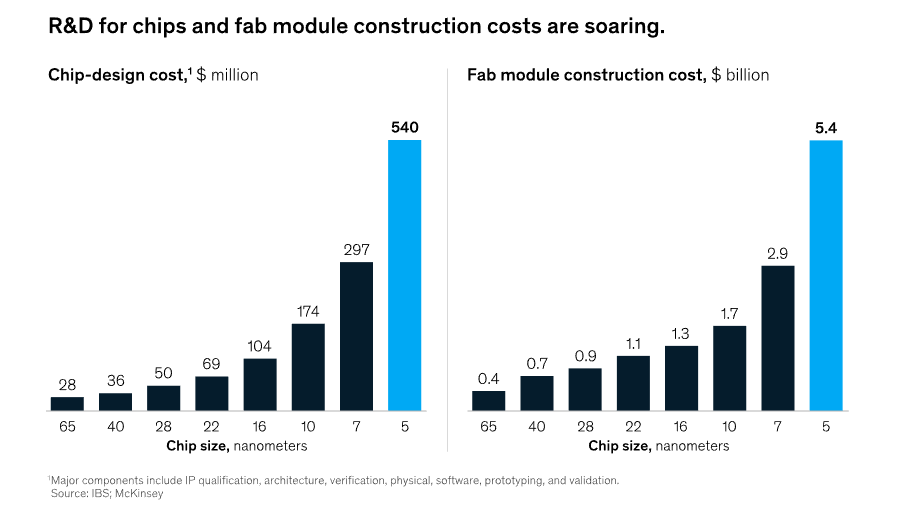 Just recently, Tom's Hardware reported the words of the Taiwanese vice-premier, Shen Jong-Chin. Without TSMC confirming anything, he did mention the future, the 1nm engraving. Supported by the Taiwanese government, TSMC would have already selected a suitable site for the establishment of a factory capable of such an engraving, near the Longtan Science Park in Taoyuan, on the island of Taiwan of course. More interestingly, Shen Jong-Chin mentioned the investment needed for this plant: $32 billion, which is $12 billion more than the cost of a 3nm plant.

As the chart above shows, investment is increasing at a rapid pace as the wafer-thinness becomes more and more difficult to achieve. In the case of 1nm, it is necessary to redesign the entire machine and TSMC will rely on the latest lithographic tools of ASML, the leader in this field, so-called " extreme ultraviolet " (EUV) machines. If TSMC does not seem to have to give up in the face of the costs of 1 nm, we can wonder if Intel or Samsung will be ready for such investments. How many companies are working on this technology, which is not expected to see the light of day before 2027? And after that?