AMD unveils its EPYC "Genoa" processors: monsters with up to 96 cores A little over two months after the launch of the Ryzen 7000, AMD is extending the Zen 4 architecture to its server processors, the EPYC range.

On August 30th, AMD launched its new marketing campaign through a three-part conference. The first part - on August 30th - was called " together we advance_PCs ". It focused on the brand's first processors based on the new Zen 4 architecture, the Ryzen 7000, designed primarily for desktop machines. At the end of October, AMD focused on dedicated graphics solutions with the second part of its conference, " together we advance_gaming ". The idea was to present the future of Radeon, its graphics cards. The new cards will be available from mid-December and will allow us to discover in more detail the RDNA 3 architecture that drives these Radeon RX 7000 with two models, the RX 7900 XTX and RX 7900 XT. 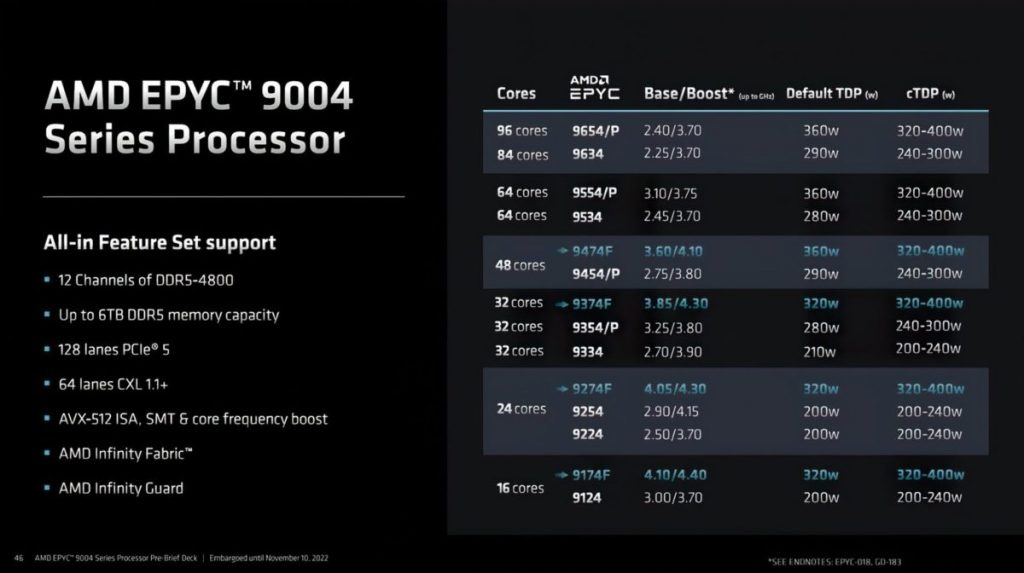 At the end of last week, November 10 to be exact, AMD organized the third part of its conference. A meeting called " together we advance_data centers " and which, as its name indicates, focused on the world of servers, data centers. This field is the preserve of the EPYC range, particularly muscular processors, but which nevertheless rest on a common basis with the Ryzen. In fact, the new EPYC range - codenamed "Genoa" - puts the Zen 3 micro-architecture on the back burner and organizes itself around Zen 4. During its presentation, AMD emphasized 14 processor variants, and even a total of 18 references if we include all the sub-variants. 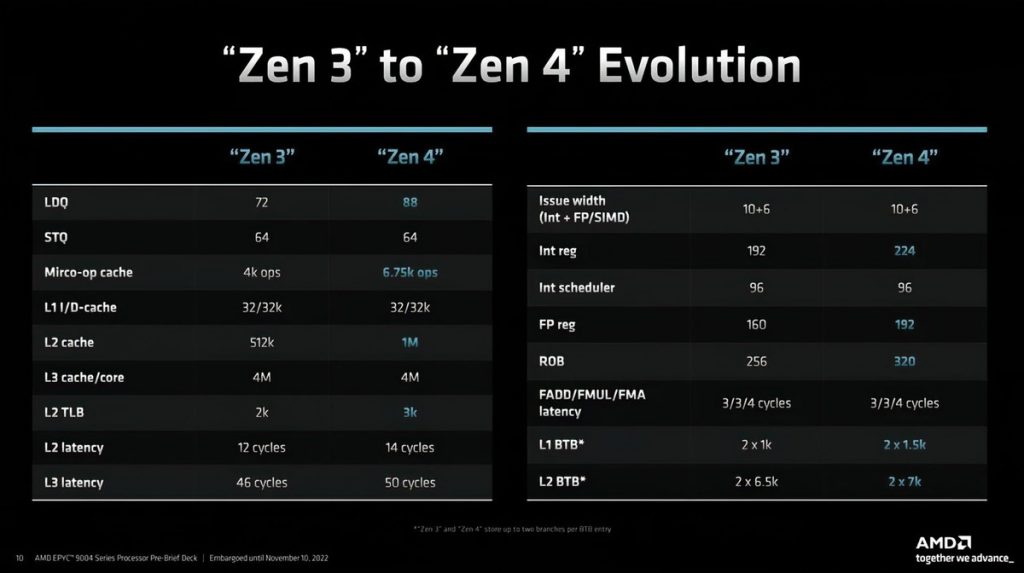 The EPYC 9124, the smallest of the new range, will already have 16 cores / 32 threads, but the most impressive is obviously on the other side of the spectrum: the EPYC 9654 is indeed an absolutely monstrous chip. This processor will be composed of 96 cores/192 threads, but focusing on the number of cores/threads alone does not accurately reflect the gigantic nature of this chip, which is now a classic AMD design based on MCM or MultiChip Modules. This is a "modular" organization with what the American brand calls Zen 4 CCDs, each of which integrates a maximum of 8 cores and up to 32 MB of third-level cache, while the second-level cache is doubled. Depending on the processor, up to 12 of these CCDs can be aggregated, as is the case with the EPYC 9654. 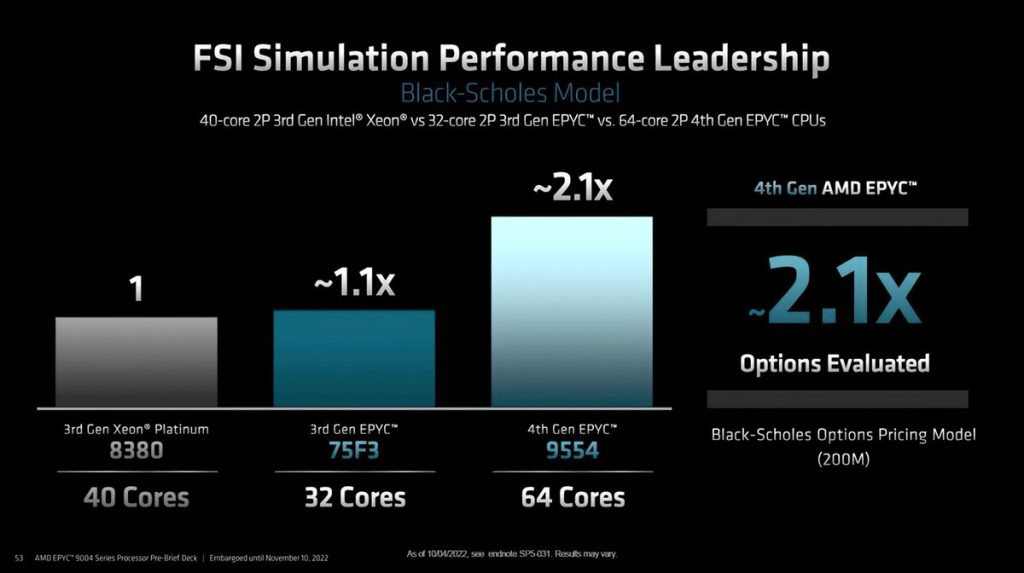 Next to the CCDs, another module takes care of all the input/output, this module is called the sIOD. It should be noted that as on the Ryzen 7000, AMD adopts a dual process of engraving. On the one hand, the CCDs use the 5 nm process of the Taiwanese TSMC, while the sIOD has to make do with 6 nm, still from TSMC. Of course, still in the manner of Ryzen 7000, the use of Zen 4 architecture allows EPYC "Genoa" processors to turn to DDR5 memory and PCI Express 5.0. For RAM, it is "only" a question of support for DDR5-4800, but EPYC processors bet on reliability and capacity: the RAM is with error correction (ECC) and the system can manage a maximum of 6 TB! On the PCI Express 5.0 side, a mind-boggling number of 128 PCIe 5.0 lines are mentioned, which represents 10 x16 Gen 5 ports at their maximum bandwidth! 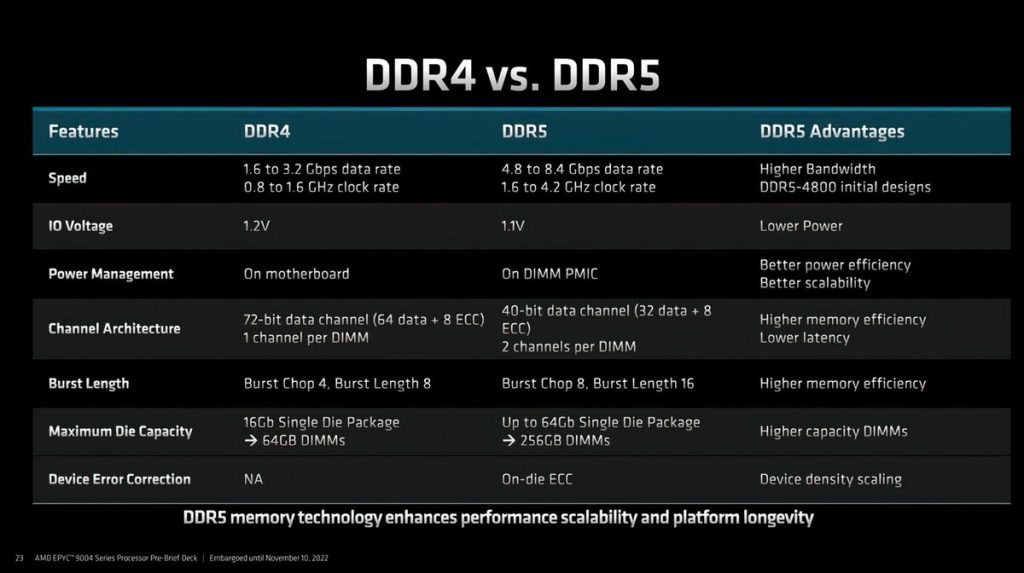 Even if we don't necessarily aim for the colossal EPYC 9654, the new AMD processors have plenty to entice data center developers. In fact, even with a TDP that has increased significantly (up to 400 Watts) and could frighten some users, AMD hardly has a competitor in this niche: the Intel Lake-SP clearly don't seem able to stand up to the new EPYCs and Intel's renewal won't happen before next year with the release of the Sapphire Rapids chips.