The American company is solidly in the lead of SSD sales worldwide, despite a slight dip.

If, in the past, it could be said that SSDs, with the wind in their sails, were on the verge of supplanting the "traditional" hard disk, there is no longer any need to say so today, as the market is being crushed by these flash-based storage units. Hard disks are now confined to very specific applications where the need for a large storage space is essential: at home, it may be to store PC games or multiple vacation photos, in the enterprise it will be mainly for the most cumbersome work data, but it is of course in data centers that the hard disk still holds its rank.

SSDs are everywhere, but the question arises as to which of the many manufacturers who have embarked on this path have managed to pull their weight. Some were pioneers, while others were a little late in jumping on the bandwagon. Today, TrendForce, a company specializing in computer statistics of all kinds, provides an update on this market, which is certainly buoyant, but also extremely competitive. First of all, we learn that over the whole of 2021, 127 million SSDs were sold worldwide, which is an increase of 11% compared to the already record figures for 2020. 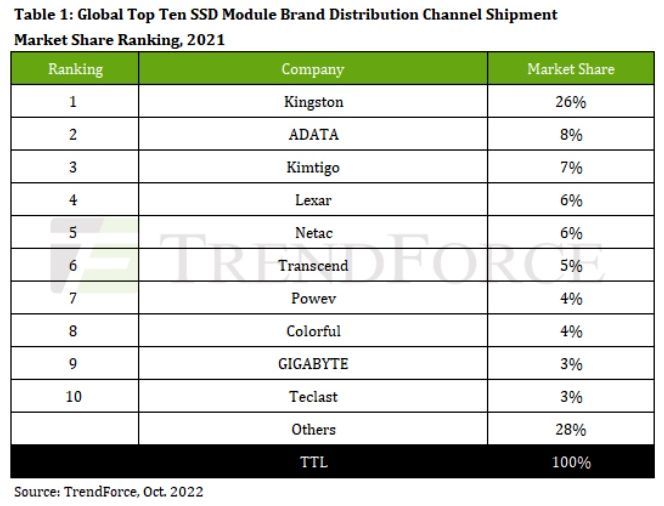 The shortage of components - power management circuits and controllers, in particular - was not enough to prevent an advance that would otherwise have been even more impressive. TrendForce points out that in its ranking it deliberately leaves out SSD manufacturers that assemble their products from their own memory chips. That's why companies like Kioxia, Micron, Samsung, SK Hynix or Western Digital are not in this ranking. However, it is interesting to note that these companies together represent "only" 42% of the SSD market. The remaining 58% is in the hands of manufacturers who do not produce their own memory chips.

In this game, Kingston is at the top of the ranking. Throne because the American company is by far the leader, even if it is slightly down compared to last year's ranking. With a 26% market share, Kingston is however far ahead of its runner-up ADATA. Note the presence of the Chinese company Kimtigo which, with a 7% market share, proves that it is quite possible to rank well while focusing on the Chinese market alone. Let's note the remarkable 9th place of Gigabyte. The Taiwanese company is therefore in the Top 10, even though it is one of the latest arrivals on the SSD market. Finally, despite remarkable performances on their models, companies like Corsair, G.Skill, Sabrent or TeamGroup are not in this ranking: proof that the bulk of sales are not necessarily made on the end of the line in terms of performance.