Intel Arc A750 and A770: an interesting price/performance ratio is confirmed Late, very late even on the schedule initially planned by Intel, the Arc A750 and A770 graphics cards do not seem to be missed at all levels.

Almost fifteen years after the cancellation of the Larrabee project, Intel is back in the world of dedicated graphics cards. A comeback that the American company would obviously have liked to be more triumphant or, failing that, more punctual. The problems have accumulated and, with them, the delays. In Europe, the smallest of the range, the A380s, have just been released and their availability is very uncertain. Even more embarrassing, the cards that Intel really intended for gamers, the A750 and A770, are still not on the market.

On the calendar, Intel seems to have finally solved all its problems and the manufacturer has given us an official release date: October 12, 2022. A release that will not solve all the problems, however, and many gamers have already turned away from Intel solutions when they learned that the most powerful Arc Alchemist will be somewhere between the GeForce RTX 3060 and GeForce RTX 3070. In other words, there will be no question of having a card capable of competing with the best AMD / NVIDIA products when the latter are already preparing the next generation: the Radeon RX 7000 in RDNA 3 will be presented at the beginning of November while the first of the GeForce RTX 4000 - the RTX 4090 - will be released on the same day, October 12.

Some people are quite frank about it and believe that Intel can already withdraw from the graphics card market. This would be a bit of a leap. First of all, this is only the first generation of dedicated graphics cards for Intel: we shouldn't have believed that it can completely compete with AMD and NVIDIA by snapping its fingers, it will take several generations of GPUs. Moreover, the A750 and A770 cards offer quite decent performance and aiming for the same or higher power than the RTX 3060 is far from useless: the majority of PC gamers are still far less equipped than that. We all know that the higher-end cards are only for a very small part of the gamers. 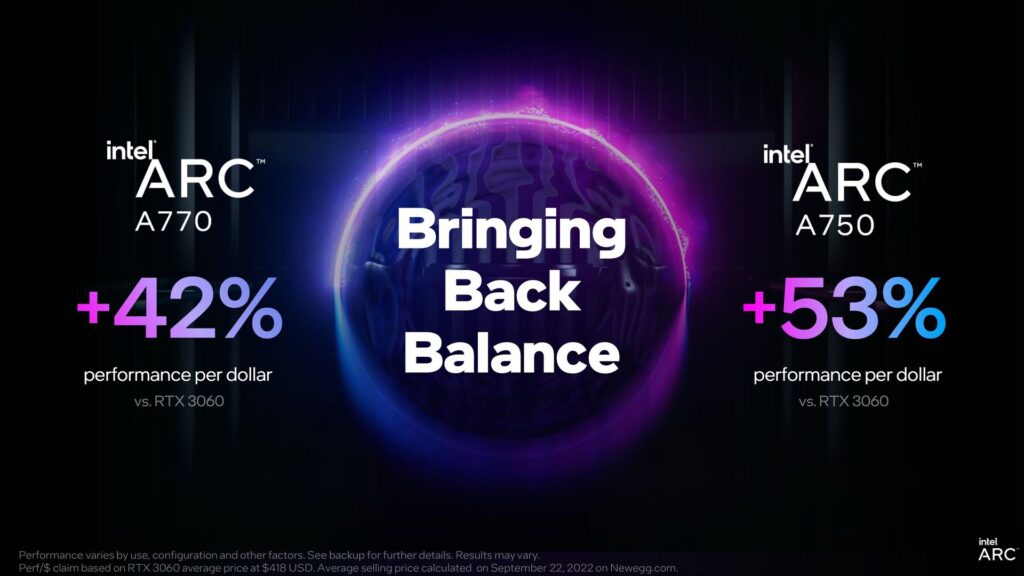 Finally, and this is undoubtedly where the future of the Arc A750 and A770 will be played out, we still need to know the exact prices charged by Intel in Europe. As for North America, the company is doing quite well with the Arc A750 priced at $289. The Arc A770 Limited Edition 8GB is priced at $329 and its big sister with 16GB of video memory is only $20 more expensive, at $349. Prices that would put the 16GB A770 between the GeForce RTX 3060 ($380) and the Radeon RX 6650 XT ($330). This allows Intel to say that its performance / price ratio is more interesting than NVIDIA's. An assertion that will have to be verified on independent tests, but which arouses curiosity.