The cloud company Backblaze has published results that confirm that SSDs are indeed more reliable than "traditional" hard drives.

For anyone who is at least a little bit interested in computer data storage issues, this is not a surprise. On the contrary, it is a piece of information that almost everyone has been convinced of for several years now. Today, however, it is no longer a question of "believing" (no matter how much you trust yourself), but of "knowing" thanks to the publication of a large survey conducted by the cloud company Backblaze and relayed by the Neowin website. 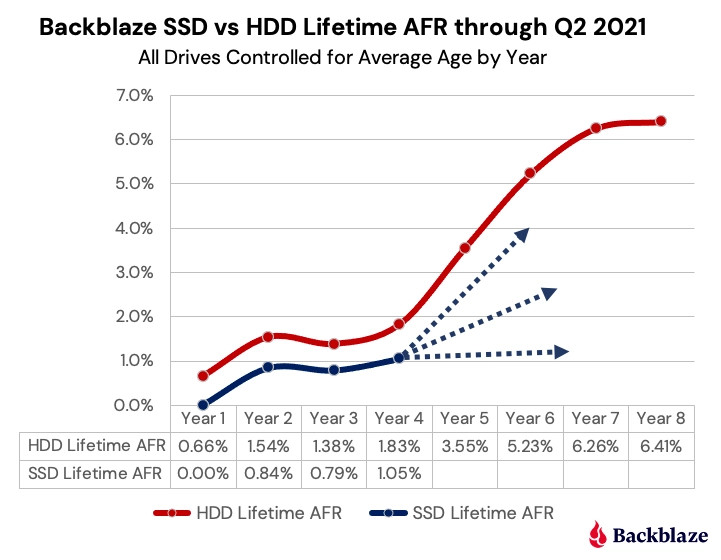 To be fair, the Backblaze survey is still ongoing. It is indeed a long-term project (initially planned for 8 years) that is now more than halfway through its planned duration, as it is finishing its fifth year. For some, given the respective age of the two technologies, these five years will not be enough. However, we believe that the hindsight is starting to be very interesting, especially since the differences observed are considerable. But just what differences?

Backblaze simply looked at the annualized failure rate of each of the two media types, SSDs on the one hand and "traditional" hard drives or HDDs on the other. He recorded these statistics month after month, year after year, and now publishes the updated graph for this fifth year. On the first graph (above), we see the cumulative results over four years with various trend scenarios for the fifth year. In the second graph (below), these trends have been replaced by the reality of the five-year cumulative numbers recorded by Backblaze: they speak for themselves, don't they? 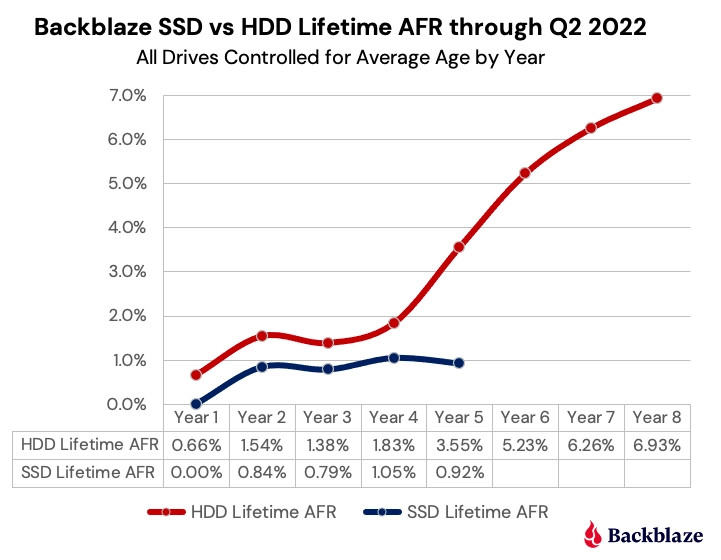 We can indeed see very clearly that the failure rate for SSDs is flirting with 1% while it is extremely close to 7% for HDDs. The latter is therefore indisputably less reliable than the SSD and even very clearly less reliable. On the other hand, it should be remembered that data recovery in the event of a failure is easier with HDDs, but in infrastructures such as those of Backblaze, no one tries to recover their data, as redundancy is widespread.