In a market that continues to decline, Western Digital markets hard drives with a capacity of 22 TB While hard disk drives are selling at an all-time low, capacities continue to grow to counter SSDs where it is still partially possible.

For years, the hard drive industry has been facing increasing competition from SSDs or Solid-State Drives. These flash-based storage units first replaced platter-based hard drives to speed up access to the operating system. At that time, it was not uncommon to buy a small - and still very expensive - SSD for the system and a much larger hard drive to store personal data and work items.

Gradually, the density of SSDs and, in fact, their storage capacities have increased, reducing the cost per gigabyte that was the main advantage of hard disks. Already much faster and more compact, capable of incomparable responsiveness, SSDs are no longer lagging behind in terms of storage capacity... or rather, the available capacities are sufficient for the majority of uses, which explains the continuous drop observed by Storage Newsletter on the hard disk market. 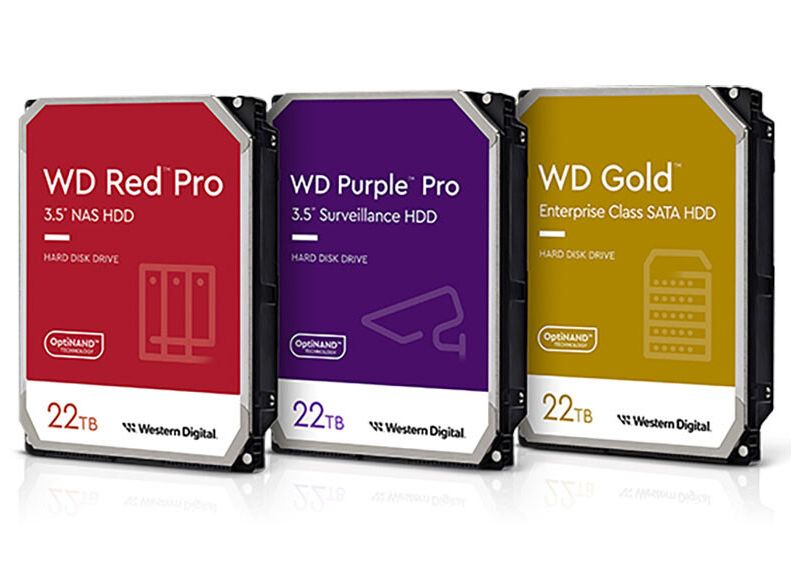 Today, the bulk of the decline is concentrated in the notebook market: sales of 2.5-inch hard drives are the most affected. Innovations in this field are very rare and if Western Digital has communicated recently, it is to announce new record capacities for servers. The WD Gold, WD Red Pro and WD Purple Pro ranges now have a new variation with 22Tb models. They use for that 10 platters of 2,2Tb each one while the units keep an operation at 7 200 rpm. Western Digital also evokes the presence of 512 Mb of cache and details all the characteristics on its official site.

The American manufacturer evokes an immediate marketing even if the first deliveries should not be done before 2 or 3 weeks, initially in North America. There, the prices of the 22Tb models are fixed at 599,90 dollars whatever the chosen variant.