In 2021, Apple generated over $15 billion from video games Mobile gaming has put Apple on the podium of the top three players in the video game industry as a whole.

When we talk about Apple, we obviously think of the iPhone. We may also think of iPads, Macintosh computers, the MacOS operating system, iPods and many other products, but we rarely think of video games. Yet, thanks to the video game category of the App Store, the games marketed and the associated microtransactions, Apple has achieved a turnover of 15.3 billion dollars in the year 2021 alone. Figures published by analysts from the company Newzoo while Apple does not communicate this kind of information.

Compared to the year 2020, this represents a very clear increase in the turnover of this sector for Apple since it is a question of an increase of 17.7%. More importantly, this remarkable result places Apple in the top three of the major players in the world of video games, and we are talking about video games as a whole, not just mobile games. Apple is now behind the Chinese giant Tencent. Tencent is the owner of the League of Legends franchise and the publisher of PlayerUnknown BattleGround Mobile. Tencent's revenues totaled $32.3 billion, an increase of 9.9% over the last year, which is significantly lower than Apple's. 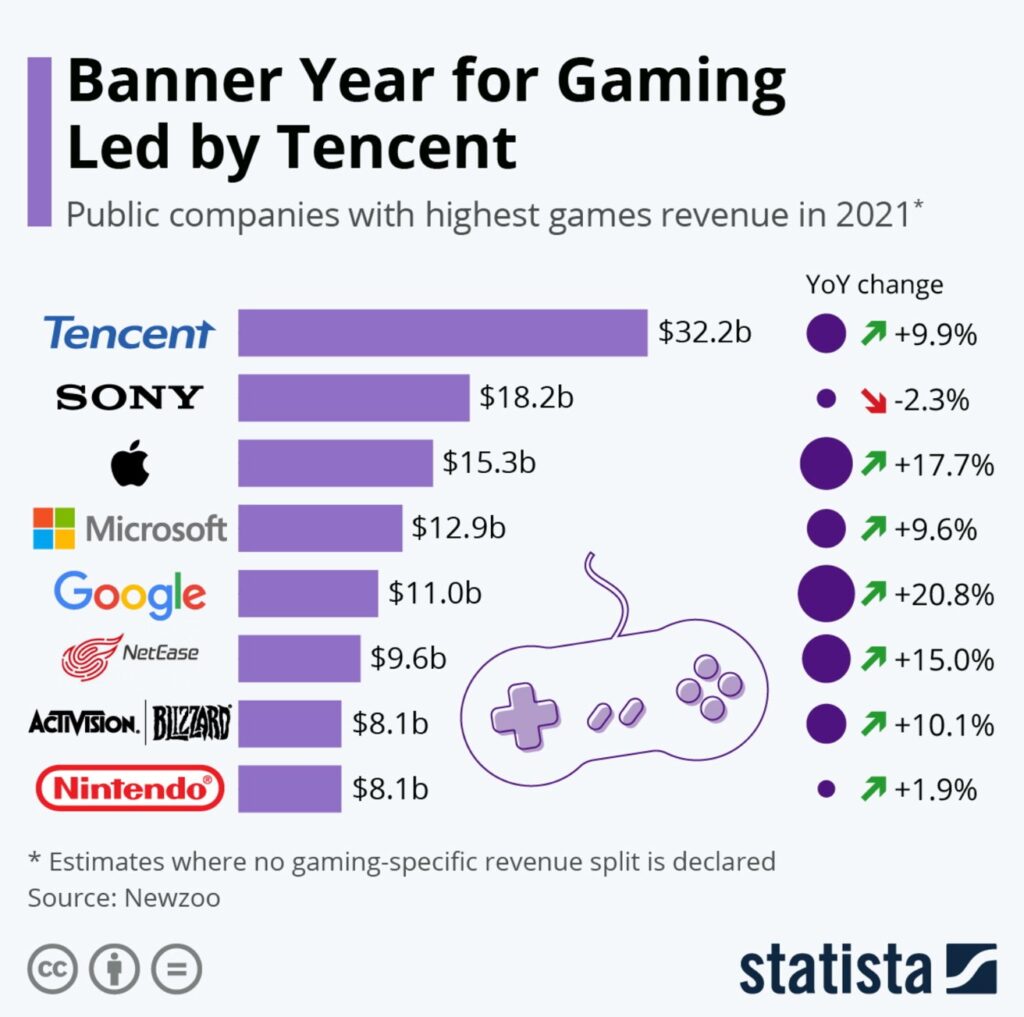 In second place we find Sony. The Japanese company has achieved a turnover of $ 18.2 billion in 2021, but unlike the two companies previously mentioned, this is a decrease of 2.3% compared to 2020. In fourth place, the American Microsoft has increased by 9.6% over the year, with sales of $12.9 billion in 2021. Of course, Google is very present thanks to its Play Store, and takes fifth place: a turnover of 11 billion dollars, up 20.8% over one year, the highest in the sector.

NetEase takes the sixth place in this ranking with a turnover of 9.6 billion dollars, up 15% over one year. We have to wait until the seventh place to see a "historic" publisher of video games, the American Activision Blizzard, whose 2021 revenue is at 8.1 billion dollars, up 10.1% compared to 2020. The turnover is the same for Nintendo, eighth in this ranking, but the growth is much lower for the Japanese, at only 1.9% over one year.