A revolutionary new chip capable of putting AMD, Intel and NVIDIA in agreement?

Unknown to the general public, the company Tachyum has just announced a range of processors that it presents as revolutionary being the " first universal processors in the world ". Behind this term, which is not necessarily very clear, the idea is to design a processor capable of combining the functions of a CPU, a GPU and a TPU so that it is possible to work on multiple tasks, from artificial intelligence to machine learning and more traditional calculations.

If several models have been mentioned, Tachyum insists more particularly on the Prodigy T16128, the flagship of its range. It is a processor with 128 cores whose performance seems to be very impressive. Tachyum actually states that it would be four times better than an Intel Xeon 8380 on SPECrate 2017 Integer and another three times better than an AMD EPYC 7763. On jobs involving artificial intelligence, the Prodigy T16128 could achieve 12 PetaFLOPS when NVIDIA's A100 has to settle for 5 PetaFLOPS. 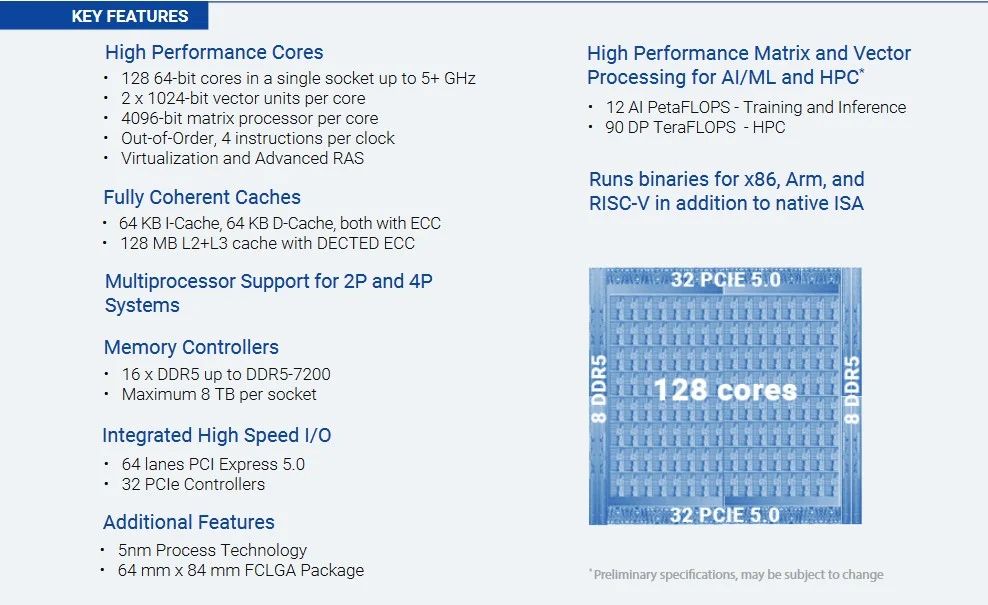 Tachyum specifies that its chip is engraved using a 5 nm process, but does not specify its foundry. It explains that its 128 64-bit cores can reach up to 5.7 GHz and that they are backed up by 128 MB of combined L2 + L3 cache. On the RAM side, DDR5 was chosen with 16 controllers for a maximum capacity of 8 TB per socket, knowing that the Prodigy T16128 can be integrated into systems with two or four sockets. Of course, PCI Express 5.0 is on the menu with 64 lines.

To further emphasize the importance of an announcement that is almost too good to be true, Tachyum specifies that the cost of its chip will be lower than competing models from Intel while having a lower power consumption. Let's temper the company's press release, however, as no launch date has been announced, while production itself is only scheduled for next year.