After several consecutive failures with the re-launch of Internet Explorer and then the release of Edge first version, Microsoft finally seems to be on the right track.

There was a time when the main Internet browser - leaving only crumbs to the competition - was designed by Microsoft. It was Internet Explorer, which was installed by default on all Windows machines and used primarily by many users who did not want to complicate their lives. Year after year, the rise of more robust and faster competitors made Internet Explorer fall from its pedestal until it became a relic that Microsoft finally put aside to launch Edge, a browser intended to make it regain its leadership position. A failure.

Aware of the problem, Microsoft did not give up. It abandoned the first version of its Edge to deploy a new version this time based on Chromium. Launched in 2020, this second iteration seems to suit more users and is gradually gaining significant market share. It is of course still too early to claim victory, but the latest statistics published by StatCounter seem to go in the direction of Microsoft and, therefore, the Edge browser. 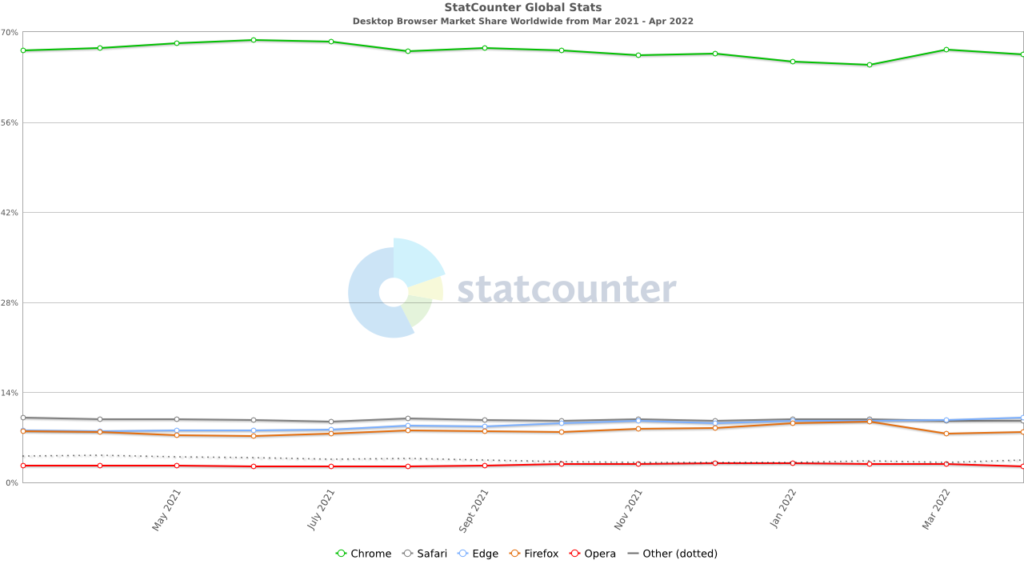 According to the data collected between April 1 and 30, 2022, Microsoft Edge has become the second most used web browser in the world behind Google Chrome. Well, let's be clear, the first place of Chrome seems absolutely untouchable in a future even "not too close". The Google tool is indeed credited with 66.64% of market share, making it the undisputed number one. On the other hand, things are more competitive behind the scenes and Microsoft Edge has just taken second place from Apple Safari: 10.07% of market share against 9.61%.

This is mostly a "bottom-up" trend as Microsoft Edge was getting closer, month after month, to its most direct competitor. With 7.86% of market share, Mozilla Firefox is an honest fourth, which manages to progress while it held only 7.57% of market share the previous month. For Firefox, the question is mainly to know if it is the beginning of a new dynamic for a browser that has difficulty to go back above 8% in a stable way. Finally, Opera closes the gap without managing to get back into the race: it seems to be stuck between 2% and 3% of market share for many months now.