AMD ensures compatibility of its "old" motherboards with the latest processors A decision that honors the Ryzen developer, while the competition tends to push for changes repeatedly.

Since November and the release of its 12th generation processors - the famous Alder Lake - it's been all about Intel. Let's face it, the innovative architecture of this generation and the return to grace of the American company have a lot to do with this omnipresence in the technology media. However, we should not forget that AMD has not given up and if the latest Intel processors are indeed performing very well, the Ryzen 5000 series are far from being ridiculous.

AMD should logically present a new generation of processors at the end of the year, but before that, it intends to capitalize on the success of this 5000 series which has not said its last word. The spearhead of this new generation, the Ryzen 7 5800X3D is a processor that incorporates a real innovation that we will have to judge on its own, the "V-Cache", a technique of stacking the cache memory in three dimensions to significantly increase the amount of cache embedded in a given space. This Ryzen 7 58000X3D has 96 MB of L3 cache when its predecessor, the Ryzen 7 5800X, was limited to 32 MB.

However, the American company is not satisfied with this new processor and it takes the opportunity to complete its range with other chips more "intermediate" as the Ryzen 7 5700X, Ryzen 5 5600 and Ryzen 5 5500. These are in Zen 3 architecture, but models in Zen 2 also come to garnish the catalog of AMD. We are talking about Ryzen 3 4100, Ryzen 5 4500, and Ryzen 5 4600G. However, the most interesting thing is not in this series of new CPUs (although, it depends on your point of view), but in the fact that AMD takes advantage of this to give a facelift to older platforms. 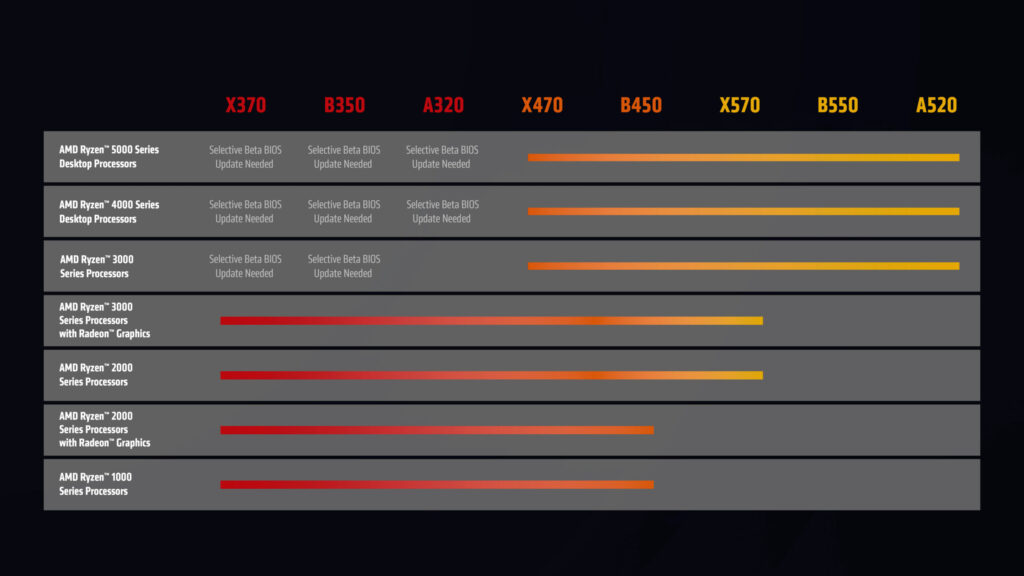 Indeed, along with this announcement, AMD has explained that motherboards based on X370, B350 or A320 chipsets will finally be compatible - most officially - with Ryzen 4000 and 5000 series chips. AMD specifies that this compatibility obviously requires an update of the BIOS of the motherboard and that this comes with the deployment of microcode AGESA 1.2.0.7. AMD's partners still have to implement this code to their own UEFI BIOSes which should take a few weeks.

AMD underlines that the availability of these BIOSes should not be effective before May 2022. On our side, we advise you to read the BIOS update notes of your motherboard before any flashing: you never know. Finally, we obviously salute the work of AMD, which has managed to ensure remarkable compatibility and longevity of its AM4 socket-based platform. To think that motherboards older than five years can still benefit from the progress of the latest processors is appreciable.