When Intel brings back the tick-tock evolution mode More ambitious and enthusiastic than ever, Intel is talking about a return to shorter cycles for its future processors.

From 2006 to 2016, Intel had implemented a two-year evolution cycle for its processors. The scheme was then called tick-tock and the idea was quite simple. It was an alternation between two technical evolutions. In the first year (tock), Intel launched a new architecture based on a previously tested chip, while the following year, the tick was an opportunity to introduce a new chip while keeping the previous architecture. In reality, a tick could also be accompanied by some new features, but this was not the main element.

A strategy that Intel maintained for a decade, but then abandoned when it seemed unable to keep up. Intel was talking about a new strategy in three steps, over three years: process / architecture / optimization. The first step was to launch a new engraving on a mastered architecture, the next year a new architecture was introduced to take advantage of this improved thinness and, finally, the third year was used to optimize all this. 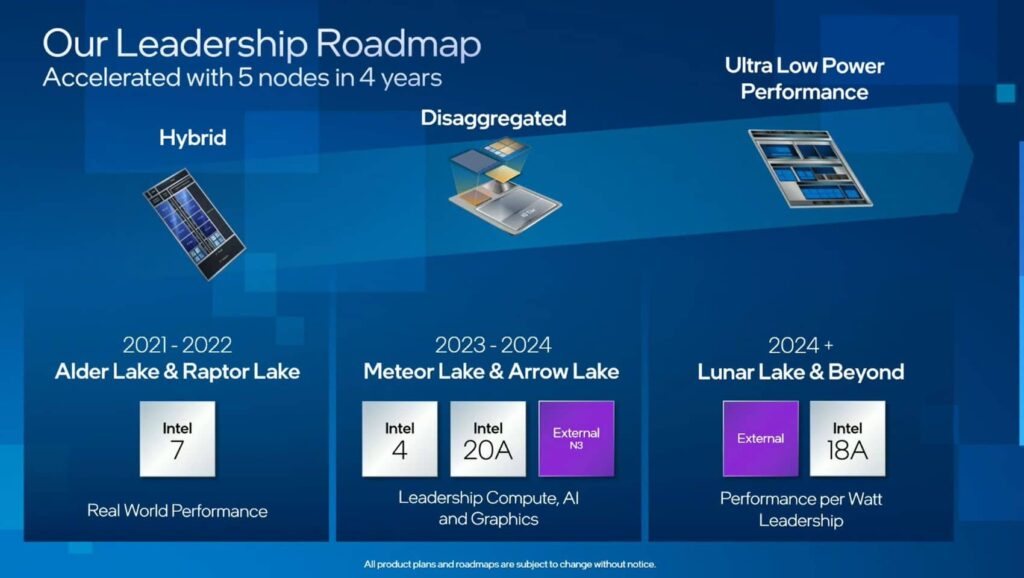 Intel's processor roadmap to 2024 and beyond

But now, the release of Alder Lake seems to really give wings to Intel which has the idea to restart the tick-tock rhythm. In 2021 / 2022, we had and will have the duo Alder Lake / Raptor Lake around the new hybrid architecture and the Intel 7 etching process. Then we should be able to count on the couple Meteor Lake / Arrow Lake to popularize the Intel etching process. After that, things are a little less clear, but Intel mentions the duo Lunar Lake / Nova Lake and Intel 18A etching.

For Intel, the goal is clearly to make the transition from the Intel 7 process (10 nm) to Intel 18A (for ångström, or 1.8 nm). A transition that should not drag despite the many intermediate steps: it will indeed first go through the Intel 4 (7 nm), Intel 3 and Intel 20A (2 nm) before reaching the Intel 18A. However, Intel is optimistic and envisages this last process of engraving for the horizon 2024. To be continued as we say in this kind of situation.