A new machine that could be particularly powerful.

The information is still to be taken with the appropriate hindsight since it is not an official communication from Microsoft. Our colleagues from Winfuture have indeed discovered in the Geekbench databases the details and the first measurements of a Microsoft machine that seems to be about to expand the manufacturer's Surface range. More importantly, this machine, for the time being called "OEMVL Product Name EV2", is designed around a Snapdragon 8cx Gen 3 processor, thus on ARM technology. 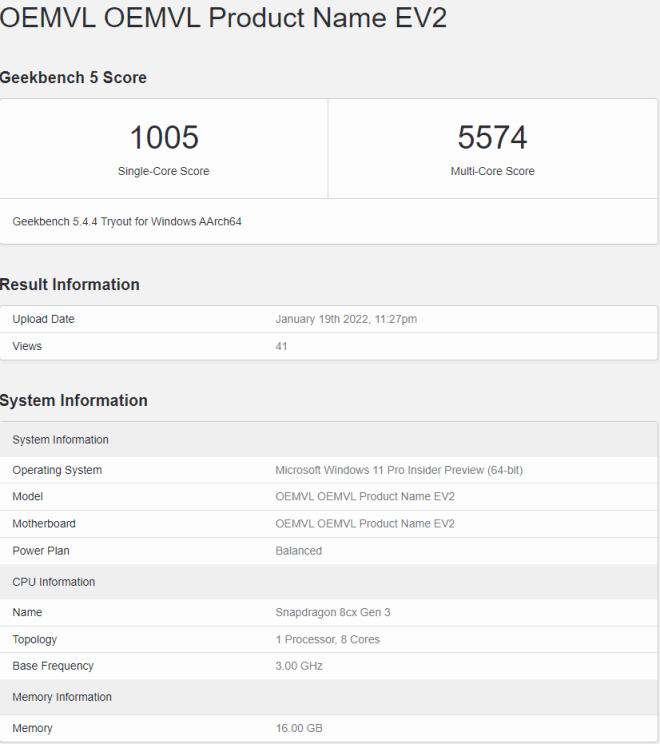 It's not the first time, of course, that Microsoft has turned to ARM architecture to design a computer, but the thing is still confidential for the American company, which still clearly favors Intel processors in its machines. For the OEMVL Product Name EV2 seen here, we still have very little information. It is designed around a Snapdragon with 8 cores whose reference is not known and clocked at a frequency of 3 GHz. In addition, the machine was supported by 16 GB of RAM, but again, no other information.

On the other hand, the Geekbench database from which the machine "escaped" is also an opportunity to discover its first performance measurements. Geekbench is certainly not the most reliable tool at this level, but we will remember that the 1,005 points in single-core test and the 5,574 points in multi-core test are more than honourable. Remember that at the time of unveiling its third generation Snapdragon 8cx, Qualcomm had highlighted progress of around 40% in single-core and up to 85% in multi-core. While we're not there yet, the results on Geekbench are promising.

For comparison, an Intel Core i7-1165G7 processor scores 1,376 points and 4,494 points in single-core and multi-core respectively. In addition, the Intel processor consumes 25 Watts while the Snapdragon 8CX Gen 3 is satisfied with 9 to 15 W. This seems very promising compared to the x86 chips signed AMD / Intel, even if the remarkable M1 of Apple keeps a clear advantage at this level. To be continued..