SSDs are still far from being able to compete in terms of storage capacity.

Today, few personal computers rely solely on traditional hard drives. In most cases, the latter have even disappeared completely, while SSDs - for solid-state drives - have become commonplace. Smaller, faster and more energy-efficient, SSDs have obviously replaced hard drives for all laptops, but even on desktop machines they have gained a decisive advantage. However, hard drives still have a card to play: when the cost per gigabyte is important and large capacities are needed.

In publishing the latest update of its roadmap, Japanese manufacturer Toshiba has confirmed this advantage of "traditional" hard drives and while large capacity SSDs usually cap at 8TB, 2021 will have seen the launch of 20TB hard drives. However, this capacity is only a stage, while new technologies should enable us to considerably increase the level of storage. The various manufacturers seem to want to set several milestones towards 30TB, then 40TB. 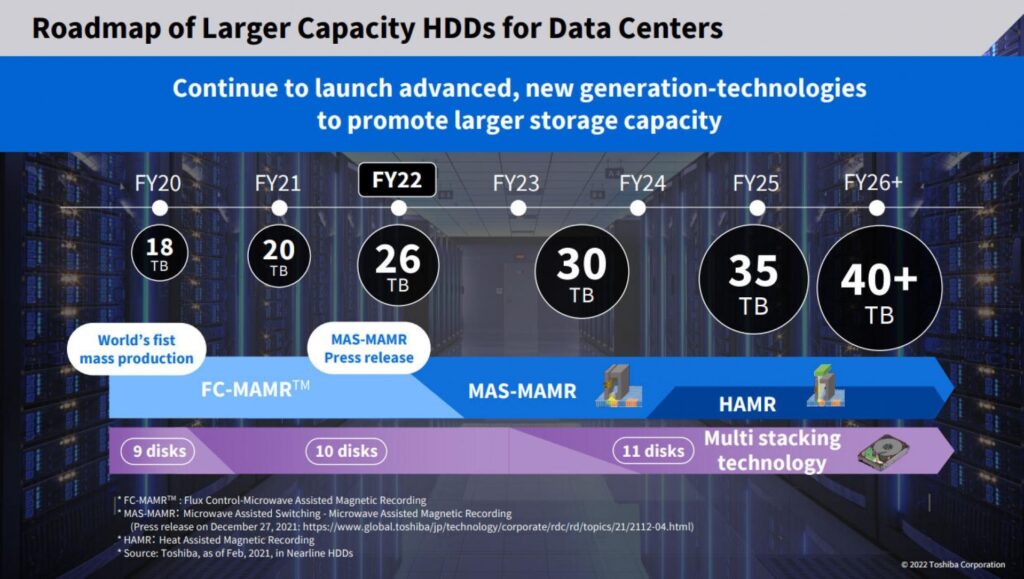 For Toshiba, things will involve significant technological evolutions, as can be seen on the Japanese company's roadmap. For the moment, Toshiba relies mainly on the so-called FC-MAMR(Flux-Controlled Microwave-Assisted Magnetic Recording) technology to reach the 18 or 20 TB of its high capacity disks. Before the end of the year, it should be able to push this technology up to 26TB hard disks before launching MAS-MAMR(Microwave Assisted Switching Microwave-Assisted Magnetic Recording) which should allow to cross a first "limit", that of 30TB, during the year 2023.

If everything goes as planned, Toshiba still seems to be counting on this technology to reach 35TB by 2025 and even 40TB during the year 2026. However, things are still a bit vague and Toshiba's roadmap also mentions the use of HAMR(Heat Assisted Magnetic Recording). This technology is generally presented as the future of the traditional hard disk and it is on this technique that Western Digital relies to evoke disks of 30Tb or Seagate for its products of more than 40Tb (from 2025). Of course, such capacities are not aimed at private individuals: it is the data centers that are in the manufacturers' sights.