PCI Express 5.0 power supplies are coming... and it's not that simple A maximum of 450 Watts or 600 Watts for the graphics card depending on the type of connector used.

In September 2020, NVIDIA released its new generation of graphics cards, the GeForce RTX 3000 series. It took the opportunity to deploy a new type of connector to replace the "6-pin / 8-pin" and simplify the wiring. If the thing was not particularly emphasized by NVIDIA, the new 12-pin connector was also to allow the passage of a more powerful electrical current. It was not taken up by the American's partners, but this new connector was actually connected with the specifications of PCI Express 5.0, as we learned only a few days ago and this is where things get complicated.

Indeed, for the time being, officially PCI Express 5.0 power supplies can be counted on the fingers of one hand, and they are mainly from the manufacturer Asus, which has played a strange game. A mention is affixed to the blocks in question, " PCIe 5.0 Ready " as if to confirm that these power supplies are indeed compatible with the new standard. A mention that can be found both on the blocks of the Asus ROG Thor range and on those of the Asus ROG Loki range. 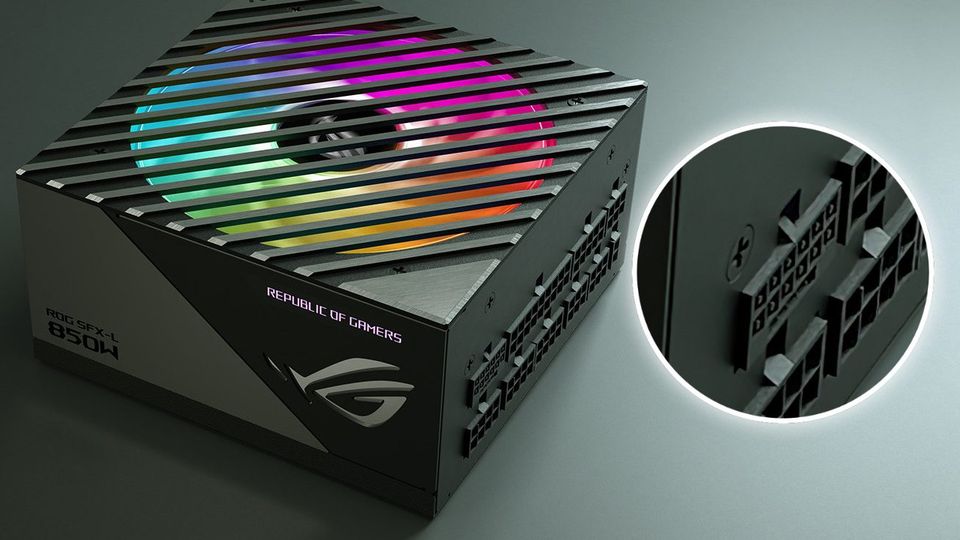 An Asus ROG Loki block and its 12+4 pin cable

The former have a "simple" 12-pin connector like those found on NVIDIA GeForce RTX 3000 series graphics cards. On the other hand, the latter have a 12+4 pin connector also known as the " 12VHPWR High Power Connector ". Without further explanation, it was hard to know what the four extra pins were for, but it was hard to see Asus adding them "for fun". Four pins named S1, S2, S3 and S4 by the main observers and whose importance is now known.

It is simply to increase the maximum current limit allowed by this cable. On a "simply" 12-pin cable, it is therefore a question of passing up to 450 Watts. On the other hand, on the 12+4 pin cable, you can go much further: up to 600 Watts. In fact, if the Asus ROG Thor power supplies are perfectly capable of exploiting PCIe Express 5.0, it will not be necessary to exceed 450 Watts for the graphics card, whereas the Asus ROG Loki can climb to 600 Watts.

The new description with the mention "up to 450 Watts", correct

Asus has recently updated the specifications of its ROG Thor power supplies to clearly highlight a limitation that was not previously obvious. It's hard to say at this point whether these power supplies with a "simple" 12-pin cable will be a problem in the future. However, it is certain that the " PCIe 5.0 Ready " statement is not enough and calls for the utmost caution when making a purchase.