Alder Lake release: Intel more confident than ever against AMD Arrived since a little more than a year at the head of Intel, Par Gelsinger does not hesitate to proclaim loudly that Intel " has taken things in hand ".

On November 4, Intel released its first batch of 12th generation processors with great fanfare. The 'K' and 'KF' ranges of CPUs on Alder Lake architecture were finally the opportunity for Intel to launch an ambitious product after having struggled so much with the 10 nm etching process. Technical problems followed technical problems and the American manufacturer kept postponing this new etching technology. It was even forced to release the Comet Lake and Rocket Lake ranges, whose innovations could be counted on the fingers of one hand.

At the same time, AMD has been enjoying success after success with its Ryzen processors since 2017. The Ryzen 3000 series thus allowed AMD to take a small lead over Intel. More embarrassing for Intel, at the end of 2020, AMD distributed its Ryzen 5000 series based on Zen 3 cores. Not content to accentuate its advantage in the application field, AMD also paid the head of its competitor in the world of video games, the preserve of Intel since ... always. 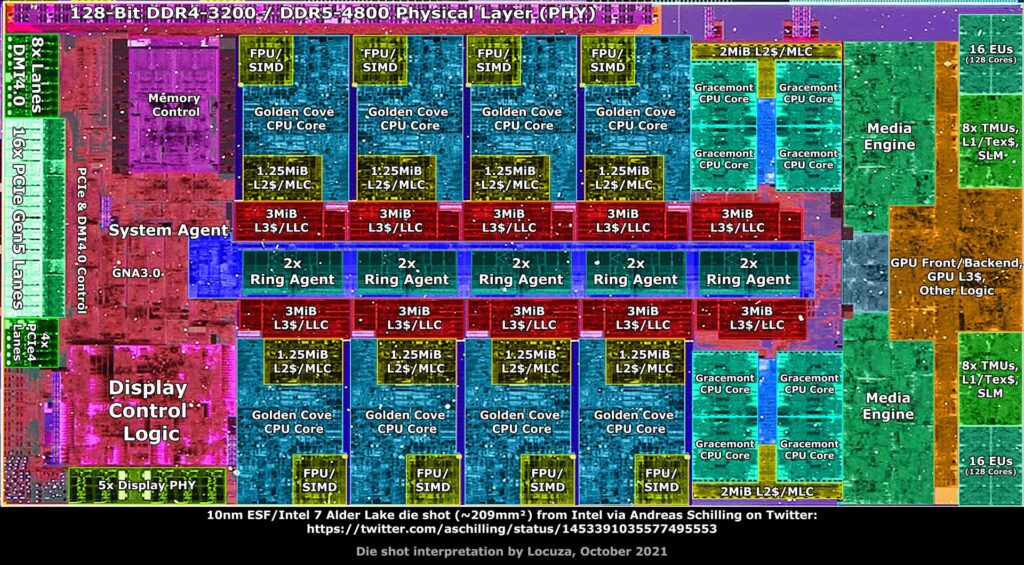 Internal design of an Alder Lake processor, interpreted by Locuza

On November 4th, Intel's reaction finally arrived, and a few weeks before the release, Pat Gelsinger, its CEO, didn't hesitate to say that if " AMD has done a solid job over the last few years [...] it's now over, with the release of Alder Lake and Sapphire Rapids [ ...]. AMD dominating, it's over ". The various tests of the specialized press around the Alder Lake processors and the very good sales recorded by the resellers allowed Pat Gelsinger to push the nail even further: " All of a sudden... Boom! We're back in business [ ...]. AMD is in our rearview mirror in the customer segment [the consumer market], and never again will it be in front of our windshield; we're just the market leader.

A comment made through a "new year" video posted for Pat Gelsinger's followers on the professional social network LinkedIn. If it goes without saying that Intel is indeed in a better position than one or two years ago, we feel that Pat Gelsinger is also trying to reassure investors by hammering his message and supporting it with confirmations on the upcoming projects on the Intel side. However, the CEO forgets a little quickly that AMD is also working. The company led by Lisa Su has indeed some nice cards to play in 2022 like the release of the Ryzen 6000 series and, especially, the Ryzen 7000 series with their new Zen 4 cores.