PCI Express 5.0 and the promise of 12+ GB/s SSD throughput The PCI Express 5.0 revolution should boost the performance of next-generation graphics cards... but also of SSDs just around the corner.

On November 4, Intel released its 12th generation of processors, Alder Lake. With this new platform, the American giant has introduced a hybrid architecture that has been much talked about, but it has also introduced various technological innovations to modernize its entire platform. For example, the support of DDR5 RAM is not without its problems due to the low availability of memory. The other big news is the support of PCI Express Gen 5 to go a little further than PCIe 4.0. 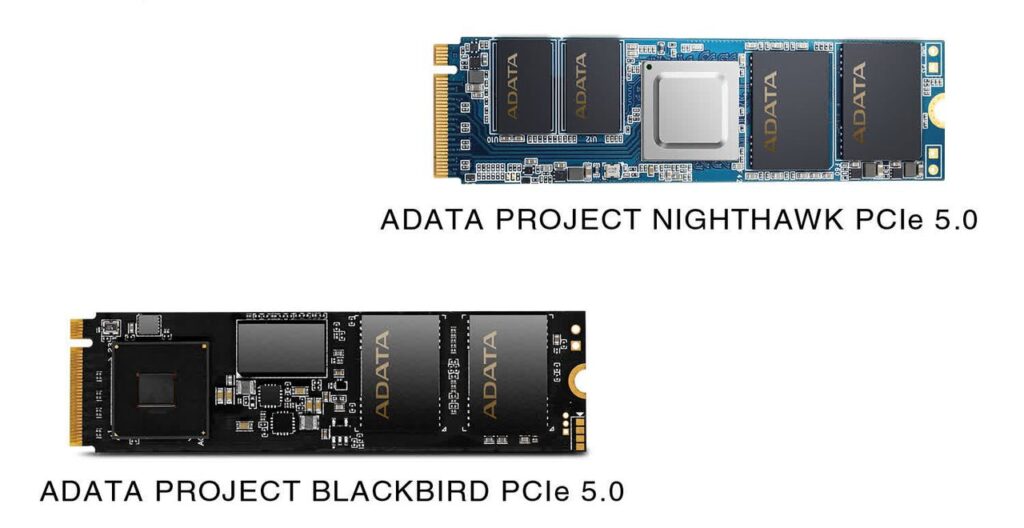 On Alder Lake, only the processor is able to handle PCIe 5.0, through sixteen dedicated lines. Even the highest-end chipset on the new platform - the Z690 - is limited to PCIe 4.0, and AMD will probably have to wait until the second quarter of 2022, at best, to see processors compatible with this new standard. However, the CES 2022 in Las Vegas, which will open its doors on January 5, should be an opportunity to see a lot of new PCIe 5.0 compatible devices.

For graphics cards, we will probably have to wait a few more months, but the world of SSDs is in turmoil. For example, ADATA has already presented two prototypes of M.2 SSDs in PCIe 5.0, the Nighthawk and Blackbird, storage units in 2280 format. The first is designed around a Silicon Motion SM2508 controller, while the second adopts the InnoGrit IG5666: the Nighthawk thus aims for throughputs of around 14 GB/s and 12 GB/s, respectively in sequential reading and writing. This is far ahead of the fastest PCIe 4.0 solutions (around 7 to 7.5 GB/s). The Blackbird will be a little slower, but at 10 GB/s sequential write, it remains a real rocket.

For its part, Samsung announces the upcoming release of the PM1743 which it should present during CES. Rather intended for the world of the company, the SSD adopts two different formats according to the needs: the E3.S in 3 inches or the more traditional box 2,5 inches. Samsung evokes the presence of a new controller - logical - but gives no reference. The South Korean specifies on the other hand that the speeds envisaged in sequential reading are of 13 Gb/s in adequacy with the announcements of ADATA. Things are more surprising for the sequential writing, Samsung announcing "only" 6,6 Go/s.

Samsung emphasizes that this represents between 1.7 and 1.9 times the performance of the PM1733, the model that this PM1743 should replace. It specifies that the embedded memory is V-NAND TCL V6 flash on 128 layers before mentioning the possibility of reaching 2.5 million IOPS in random reading and 250,000 IOPS in random writing. Finally, Samsung said that several capacities will be commercialized from 1.92 TB models to 15.36 TB versions. Mass production is expected to begin in the first quarter of 2022, in line with the estimated release of the first servers based on Intel's new/future Sapphire Rapids processor.