Taking advantage of the Steam / Valve aura, the Steam Deck console has been widely talked about, but it's clearly not the only crossover between handheld and PC.

Long before Valve's announcements, manufacturers like AYANeo or OneXPlayer were keen to get closer to Nintendo's Switch format while remaining firmly rooted in the PC world. The former even distributed two machines in the year 2021 alone when the latter decided to "mutate" its tiny One-GX 1 notebook to change it into a real (not so) small nomad console. If the prices, the dimensions and the objectives are not exactly the same, these machines have in common to embark various APUs, often signed AMD by the way. 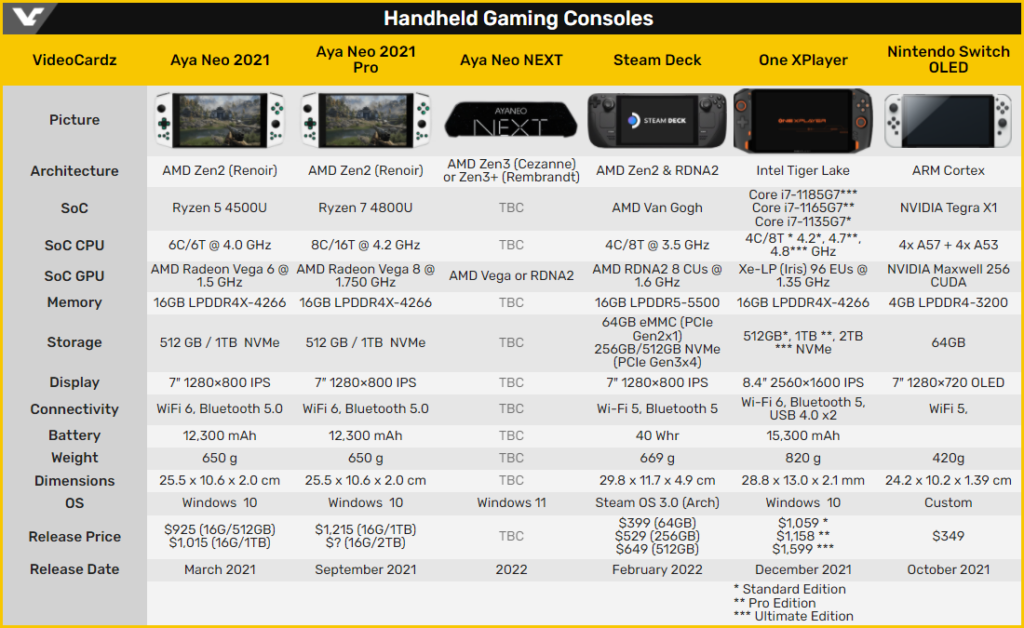 Videocardz takes a look at the available / upcoming handheld consoles

These APUs work like microprocessors, but they have an additional advantage: the presence of a more muscular graphics solution than usual. In fact, whereas previous generations of processors were often too weak to run any game - they needed a real graphics card to get out of the "small game" world - the latest APUs from Intel and even more so from AMD allow for many more uses. Valve was not mistaken and when announcing the release of its Steam Deck, the company said that " the vast majority of the Steam game library will be able to run " on the portable console.

The Steam Deck is designed around an AMD APU codenamed "Van Gogh". It combines Zen 2 CPU cores and RDNA 2 GPU cores for a solution that is considered balanced. Multiple rumors indicate that AMD will soon have something more muscular to offer us. Early next year, the APU codenamed "Rembrandt" may well be unveiled. On the graphics side, it should keep the RDNA 2 cores, but for the CPU part, we are talking about Zen 3 cores, maybe even Zen 3+ engraved in 6 nm. This could give a welcome performance boost, unless integrators take advantage of this to adjust the chip's power consumption.

AYANEO NEXT
New generation AMD cores for gamers
Innovations never seen on a Windows gaming handheld
JOIN US ON 12.28.2021 pic.twitter.com/RXRDCMOcdv

In a few days, AYANEO will unveil its "Next", a new handheld console that was not supposed to be released for several more months. We still don't know anything about the little machine, but while AMD's announcement should be made at the beginning of CES 2022 (January 5-8), the timing seems perfect for a "Rembrandt" APU-based machine capable of competing with the Steam Deck, which isn't due out until February 2022.