A number that may seem impressive, but it is only a drop in the ocean of PC.

The world is divided into two categories: those who see the glass half empty and those who see it half full. On the one hand, we have the latest results of the study published by AdDuplex and on the other hand, those of Lansweeper relayed by TechRadar. According to the former, Windows 11, which has been on the market for less than two months - it was released on October 5 - is a great success with PC users. AdDuplex's ring chart shows that the adoption of Windows 11 concerns a total of 8.9% of users: 8.6% of "normal" users and 0.3% of members of the Windows Insider program. 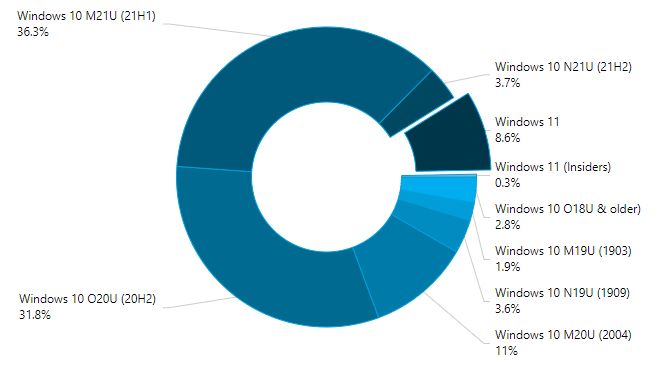 Problem is, AdDuplex only seems to deal with the dual case of Windows 10 / Windows 11 and in fact "PC users", it only seems to be about users of one or the other of these two versions of Windows. Even more embarrassing, AdDuplex then mentions the number of 100 million machines currently running Windows 11. The figure is impressive, but like the breakdown above, it suffers from a particularly obvious bias: it is an extrapolation from a supposedly representative sample of 60,000 users " displaying ads managed by AdDuplex ". Representative of what?

Now we come to the second study published a little earlier, this time from Lansweeper, a firm that already seems less judge and jury. The firm says it analyzed more than 10 million machines before drawing its conclusions. Although it does not specify how it arrived at this figure, it inspires more confidence than the 60,000 cases of AdDuplex. The study of these 10 million machines shows that Windows 11 is installed on a tiny minority. We are talking about something like 0.21% of the machines concerned. 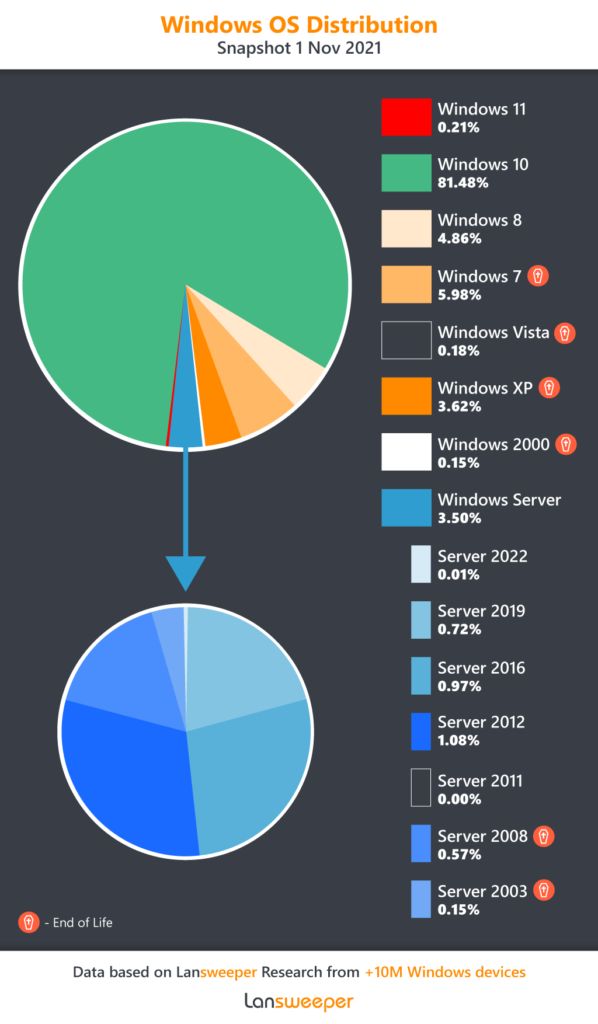 Of course, we must not forget that Windows 11 has only been out for two months, but with such a proportion, we would be very far from a tidal wave as AdDuplex may think. Windows 10 would still be present on more than 8 out of 10 machines, Windows 7 still far ahead of Windows 11 and even Windows XP would be above the new OS. In order to be perfectly honest, we should point out another bias in this study. Chronological this time. Many media outlets seem to omit this trifle, but Lansweeper makes it clear: the study was conducted around November 1st, not even a month after the release of Windows 11. Of course, after just four weeks on the market, the new Microsoft OS was not yet everywhere.

One thing remains unquestionable: if Windows 11 is clearly on a roll and seems to suit all those who have tried it, Microsoft will have to convince companies of the merits of this change, while the technical constraints are more important than for previous changes.