In order to simplify the management of Microsoft accounts and the various services of the brand, a new option has been added to the system settings.

Officially available since October 5th, Windows 11 brings a bit of new blood to the interface of its predecessor - Windows 10 - through a graphical overhaul more in line with the times made of fluent design, simplified interface and windows with rounded edges. However, this is not the only ambition of Microsoft, which offers new features, little by little, as the deployment of the new operating system reaches more users. 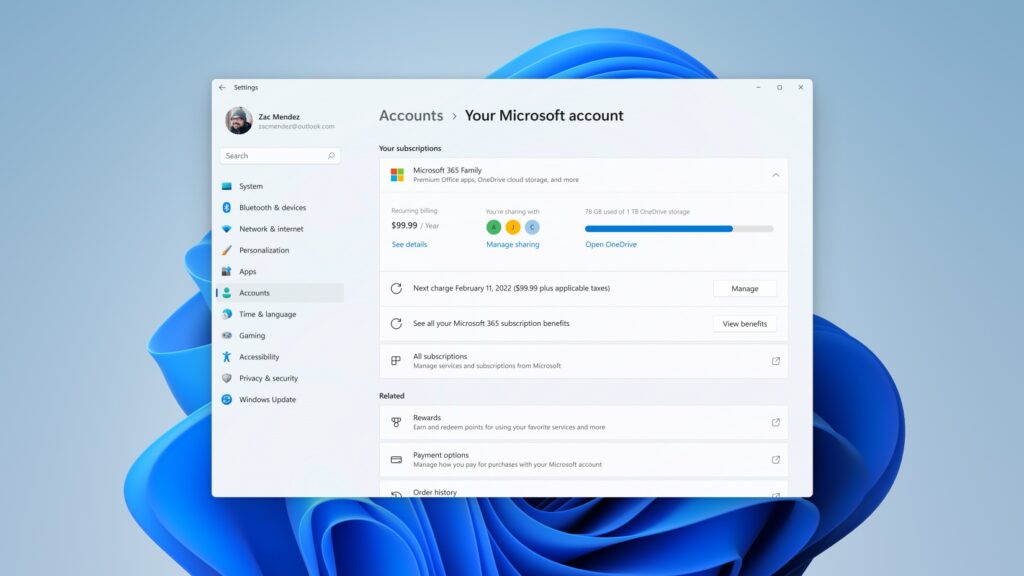 A few days ago, build 22489 was released. For the moment reserved for members of the Windows Insider program, this Windows 11 update brings a new feature that should be appreciated by all subscribers to Microsoft services. Among other new features, this build actually allows the integration of a new option to the system settings. An option that, as its name "Your Microsoft account" indicates, concerns the management of Microsoft accounts. It gathers multiple information in order to have an overview of subscriptions subscribed to Microsoft. The screenshot provided by Windows Latest shows a subscription to the Microsoft 365 service with the type of subscription and its price. Windows Latest points out that this new option does not only show account information: it is also possible to manage subscriptions. In addition, there are links to the Microsoft Rewards service and payment information.

Like any new build released by Microsoft, 22489 is not limited to this new feature: it includes several other minor improvements and fixes. Microsoft points out, for example, that problems related to the installation of certain Xbox Game Pass games have been corrected: the error 0x00000001 should no longer occur. The publisher also says that the "Applications and Features" section will now be split into two pages - "Installed Applications" and "Advanced Application Settings" - and that answers have been found to several causes of Explorer.exe crashes. Microsoft details the list of changes/fixes made by build 22489 on the Insider blog.