It's more of an amusing - and amusing - wink than a real revolution that could upset the adoption pattern of Windows 11.

Since the first announcements of Windows 11 at the beginning of the summer, Microsoft has had to deal with a lot of dissatisfied people who accuse the editor of putting aside countless configurations under the pretext that security is not assured. Microsoft explains that its new operating system should considerably improve the security conditions of users and to do so, it integrates the support of certain technologies such as the Secure Platform Module (TPM) in version 2.0, the Secure Bootor the security via virtualization (VBS).

The problem is that these safeguards lead to rather drastic hardware incompatibilities, which means that rather strong processors such as Intel's Core i7-7700 or AMD's Ryzen 1800X are not accepted by Windows 11. Of course, Microsoft did not claim that these processors were not powerful enough and the editor clearly emphasizes the absence of certain security features. However, this discrepancy between the power of the installed base and the number of machines actually capable of running Windows 11 has given ideas to a certain Carlos_SM1995. 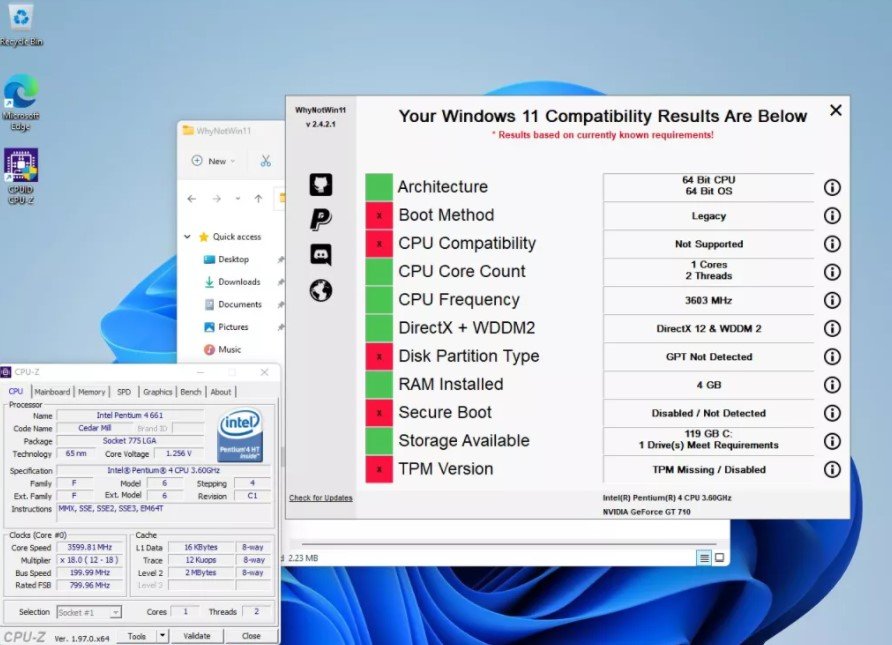 He decided to show that even an older machine, a machine that is far below Microsoft's technical recommendations, can run Windows 11. Carlos_SM1995 disabled all the security features that could cause problems like TPM, Secure Boot and VBS. He was then able to install Windows 11 without any problems, even though his test configuration was modest to say the least: he used a Pentium 4 661 processor, a CPU on Cedar Mill architecture engraved in 65 nm and clocked at 3.6 GHz. The beast was released in the first quarter of 2006 and has only one core, which fortunately could rely onhyper-threading. For good measure, Carlos_SM1995 has paired it with an Asus P5Q motherboard, 4GB of DDR2-800, an NVIDIA GeForce GT 710 graphics card and a 120GB Micro RealSSD C400 SSD.

Microsoft itself had explained how to install Windows 11 on a machine that is not officially supported. So Carlos_SM1995 is not doing anything illegal and is only applying the tips given by Microsoft. This proves that the OS is not much more demanding than Windows 10 and is more of a security-oriented redesign of Microsoft's flagship system. However, the publisher warns users against bypassing the hardware requirements of Windows 11: " Microsoft recommends that you do not install Windows 11 on a device that does not meet the minimum system requirements for Windows 11. If you choose to install Windows 11 on a device that does not meet these requirements, and if you recognize and understand the risks, you can create the following registry key values and bypass verification of TPM 2.0 (at least TPM 1.2 is required) and the CPU family and model."