If Tesla has popularized a little geekiness for the cars of tomorrow, the phenomenon of "electronification" of vehicles affects all manufacturers.

The launch of the first Tesla cars was the occasion to introduce a lot of "computer" components in the cars, with, for example, the disappearance of the classic instruments on the dashboard, replaced by a unique and very impressive flat control screen. In the same way, a Tesla is not sold without its smartphone application, which is not completely indispensable, but provides so many services that you can't do without it. As we said in the introduction, the phenomenon is far from being limited to Tesla and is growing with the massive adoption of hybrid/electric cars by all manufacturers. 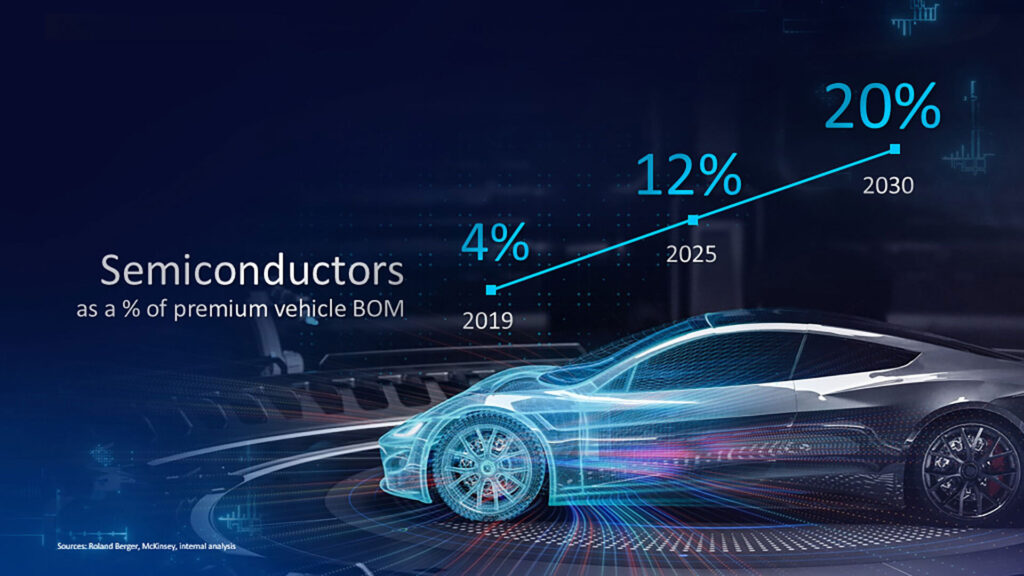 Proof of this "dependence" on electronics is the fact that a few weeks ago, Toyota was forced to announce a sharp drop in its vehicle production, due to the shortage of semiconductors in the global industry. For a shortage of semiconductors to lead to a 40% drop in car production at the number one company in the sector, electronics must really have become a key component, one without which the entire car industry is paralyzed. In fact, that's the whole point of Pat Gelsinger's latest speech, which - obviously - is preaching to the choir. In his position as CEO of Intel, it is of course in his interest to present semiconductors as a key element of tomorrow's vehicles, but the figures he presents speak for themselves.

For example, according to a study conducted internally by Roland Berger and McKinsey, Pat Gelsinger says that two years ago, semiconductors represented only 4% of the hardware cost of an "average" car. The Intel boss says that it is becoming more and more important, as we explained earlier, and that by 2025, this proportion should rise to 12%. Finally, by 2030, Intel predicts that 20% of the cost of a car's hardware will come from semiconductors alone: one fifth of the total cost of the hardware used in cars in 2030. If Intel's predictions are correct, we will have to find a solution - and quickly - to the crisis that the semiconductor world is going through: not a financial or demand crisis, but a supply crisis resulting in multiple shortages.