Information has been circulating that Microsoft might have such a compatibility in its plans: the thing seems unlikely today.

With the release of Windows 11 now set for October 5th, news will be piling up around Microsoft's operating system. However, there is one news that will keep us on our toes for several more months, as Microsoft has announced that it is no longer "for now". The information in question had however caused a lot of ink to flow at the time of its announcement shortly after the official launch of Windows 11: Microsoft had then explained that Android applications would be functional on its OS.

This feature was a big deal, because currently, to use Android applications, you have to use an emulator system that is not always very simple and reliable. Implementing such "compatibility" would open Windows 11 to a very large library of applications and could simplify the work of developers. But a new element has joined the party: could it be that Microsoft is also ensuring this compatibility with its Xbox home consoles? 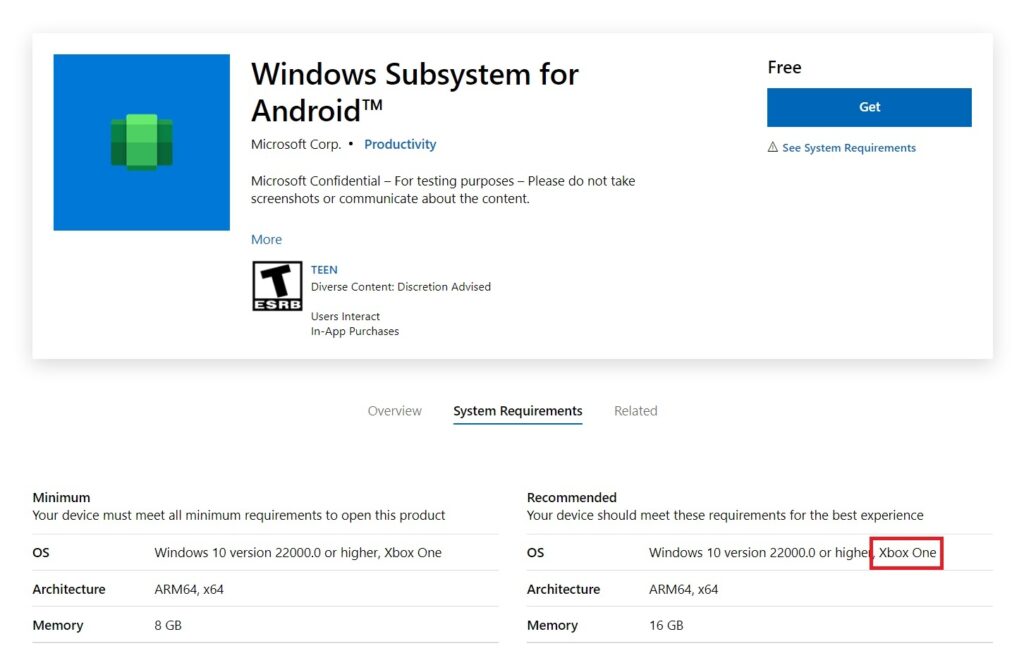 On its Twitter account, WalkingCat has indeed reported an interesting information related to the Windows Store page presenting the famous Windows Subsystem for Android application. An application that will of course have a role to play in the compatibility of Windows 11 with Android applications, but the disturbing thing is not at this level, but rather in the technical recommendations of the said application: in addition to the "22000.0 or higher" version of Windows, it is actually mentioned the "Xbox One". A precision that has since been removed, as you can see by following this link. MyWindows was able to capture the offending page before the change and the information is very clear.

Microsoft hadn't mentioned anything of the sort and, very quickly, a spokesperson intervened to answer Windows Central 's questions, saying that, no, Microsoft has " no plans to bring the Windows Subsystem for Android to Xbox at this time". Of course, we can always see in this " for the moment ", the possibility that one day Microsoft will think about it: in absolute terms, nothing is set in stone indeed, but our colleagues point out that such a possibility is still very slim. They point out that the Xbox video game ecosystem is quite particular, with its storage system, its quick resume, its successes... The interest in seeing Android games that are not at all designed for this platform, with questionable ergonomics and without any of these features, would be almost counter-productive for Microsoft.

While a PC is a working tool capable of playing video games, an Xbox console is only dedicated to video games. In this case, it would mean reworking Android games so that they are adapted to the Xbox platform: economically costly for an almost unimaginable return. Finally, let's point out that there are dozens of errors on the Windows Store information sheets, so that's probably all it was... even if the thing had enough to make one curious.