In Europe, the new number one smartphone is... Chinese. Apple, Samsung... what if these once unavoidable brands were soon to be overtaken by the Chinese tech giants?

At the moment, when talking about cell phones, it is impossible not to mention Apple or Samsung. The American on one side and the South Korean on the other are part of these unavoidable companies. However, little by little, they are giving ground to the most powerful Chinese players in the sector, companies that are beginning to make a name for themselves around the world and among which we count the brands Oppo, Realme ... or Xiaomi. Of course, Donald Trump's fight against the powerful Huawei has considerably reduced the latter, all over the world, but the time is now more than ever for Chinese smartphone manufacturers, as evidenced by the latest report on the situation in Europe. 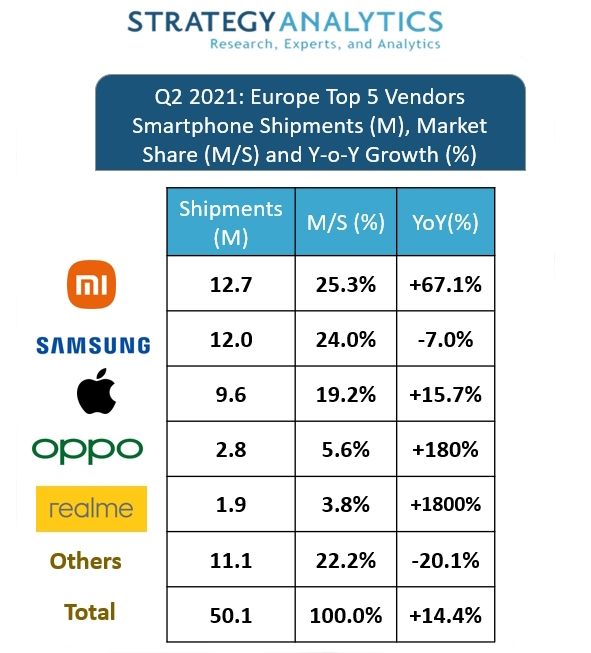 Published by Strategy Analytics, a report gives an overview of the situation of the smartphone market in this vast area called EMEA for Europe, Middle East and Africa. A report that establishes that during the second quarter of 2021, the manufacturer Xiaomi has managed to sell 12.7 million smartphones, an increase of 67.1% compared to the same period (between May and July) last year. This impressive result allows the Chinese company to capture 25.3% of the EMEA market and to become nothing less than the main player in this market. Xiaomi is now in third or fourth position and is now on the top step of the podium for the first time. Samsung is relegated to second place and Apple is only third. By the way, Strategy Analytics attributes this first place to Xiaomi's success in four countries in particular: Spain, Italy, Russia and Ukraine.

For Samsung, beyond the loss of this first place, the most embarrassing is undoubtedly the decline in the number of terminals sold over the period compared to the second quarter of 2020. Indeed, the South Korean company has distributed "only" 12 million smartphones over the last three months, a decrease of 7% over one year, while the EMEA market itself has grown by 14.4% with 50.1 million smartphones sold. Moreover, if Apple is progressing less rapidly than Xiaomi, the American company is also seeing its sales increase, by 15.7% over a year. However, it is the Chinese who are doing well. They are still only 4th and 5th in the region, but Oppo has seen its sales increase by 180% over a year, while Realme has recorded a stunning growth of 1800%. The two companies have a market share of 5.6% and 3.8% respectively. Values that are likely to increase significantly in the coming months.