Windows 11 confirmed by a leak and widely illustrated This leak is a prelude to the event that Microsoft will hold on June 24 to "reveal" this already famous Windows 11.

When Windows 10 was released, Microsoft insisted that it saw no reason to change the nomenclature of its operating system and that this Windows 10 would certainly be the last. Only fools don't change their minds, as the saying goes, and Microsoft is clearly not one of them, since a preview version of what is very clearly called Windows 11 has been circulating on the Net for more or less two days. The leak is important and probably cuts the ground from under Microsoft's feet, which had the intention of revealing this new OS during its event on June 24. 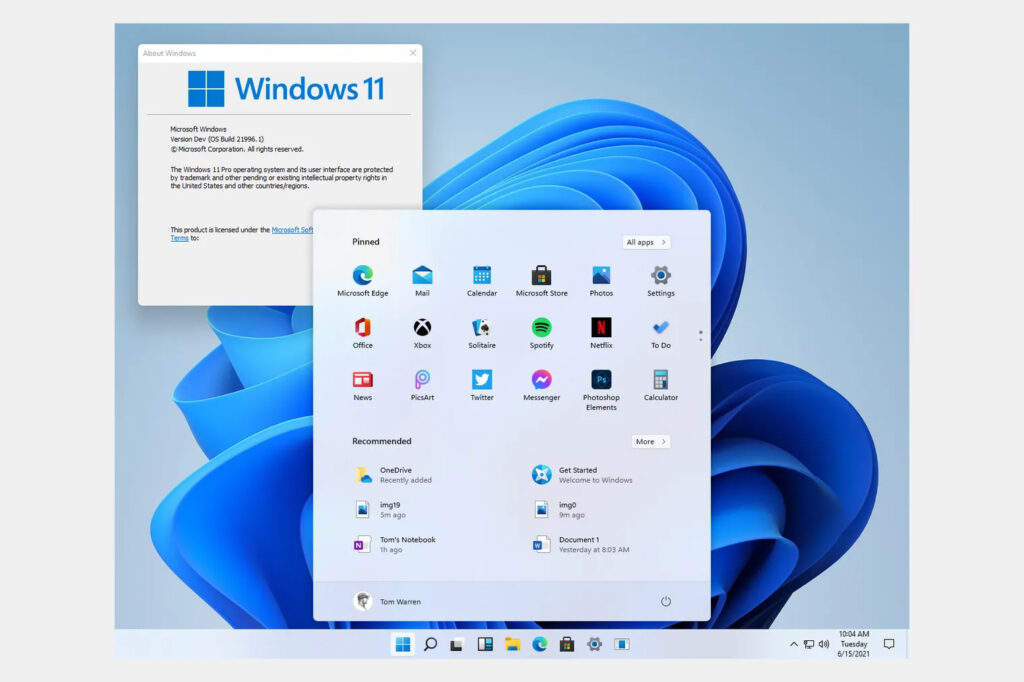 The Verge website has taken possession of the preview version of this Windows 11, which allows us to learn a little more about it. First of all, there are obviously many bridges between Windows 10 and Windows 11: there was no question of Microsoft wiping the slate clean, the publisher has never done so and there was no reason to start today. Another interesting element is that we notice several common interface points between this Windows 11 and the various preversions of Windows 10X, the ill-fated OS that Microsoft finally cancelled a few weeks ago after months of successive postponements.

Taking a look at the captures presented by The Verge, we notice a certain redesign of the taskbar. This one can be managed in a slightly different way with, in particular, the possibility of placing it in the center of the screen. Of course, it is still possible to place it at the bottom left, as we are used to, and thus keep its position as a "mirror" of the notification area, which does not change its place, in the lower right corner. In order to offer a modernized interface, Microsoft has revised the presentation of the windows of its OS. This is of course a purely cosmetic change, but the small rounded corners of the windows are not unpleasant. 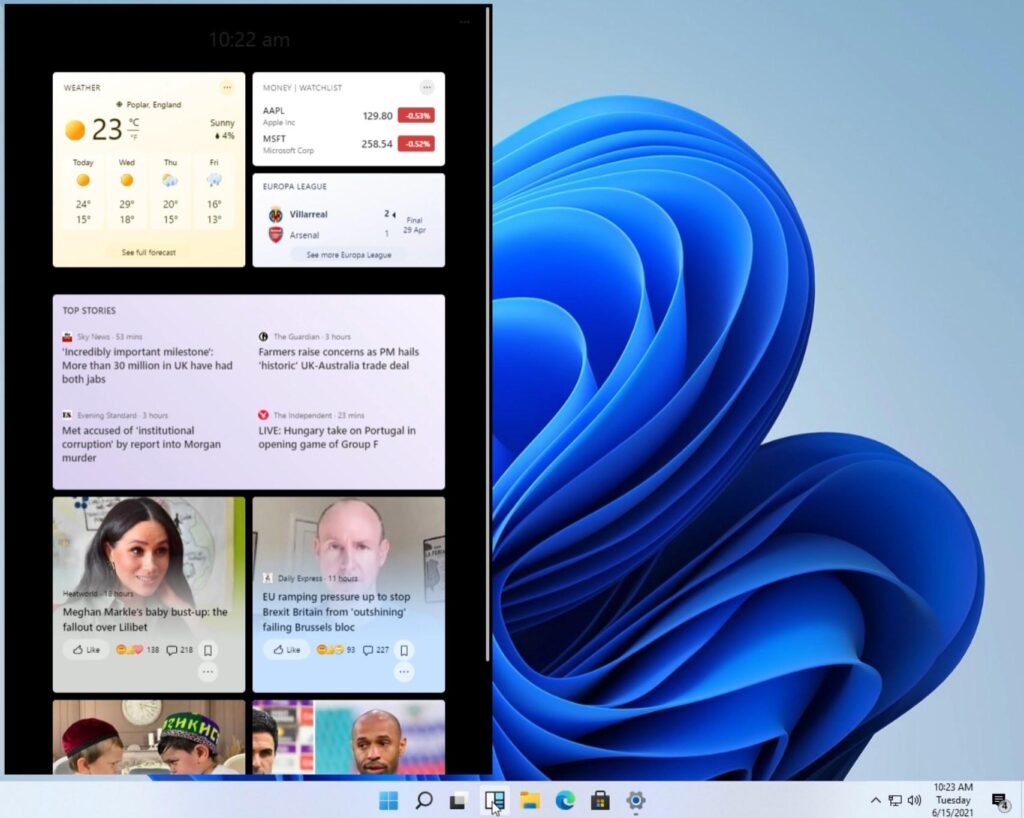 Note in passing that the Start button is still linked to the taskbar: if it is in the center, it is in the center, if it is on the left, it is too. This Start menu has, as expected, been extensively revised by Microsoft, which has decided to clean up the design and do away with the "tile" system: it is still possible to access all the system's applications, to enjoy privileged access to the most recent ones and to documents that have been modified recently. Not surprisingly, however, it is obviously from this Start menu that you can request the shutdown, restart or standby of the machine.

In parallel with this redesign of the Start menu, Microsoft has decided to reintroduce widgets, these small accessories that allow the highlighting of certain features, certain tools. Widgets that had already been mentioned with Windows 10X and are therefore a way to recycle the work done on the unfortunate OS. At the moment, however, the potential of these widgets is only touched upon and journalists from The Verge point out that they should, in time, be more customizable and that we should be able to place them wherever we want on the desktop.

As you can see on the GIF animation above, this Windows 11 preview is also an opportunity to discover a new feature called " snap " which offers several options for arranging windows on the desktop. If Windows Explorer or Task Manager don't seem to have changed much for the moment, Microsoft has already redesigned the Xbox application. It is now better integrated with Windows and has more features: in particular, it offers access to the games contained in the Xbox Game Pass, one of the engines of Microsoft's video game growth.

Finally, as you may have understood from some of the screenshots, and in particular the one below: Microsoft has of course integrated a dark mode to its Windows 11. A mode that benefits from some improvements to better integrate with the rest of the system if we believe the first feedback from The Verge. Returns that will of course be completed in time ... no doubt Microsoft will tell us more on June 24. 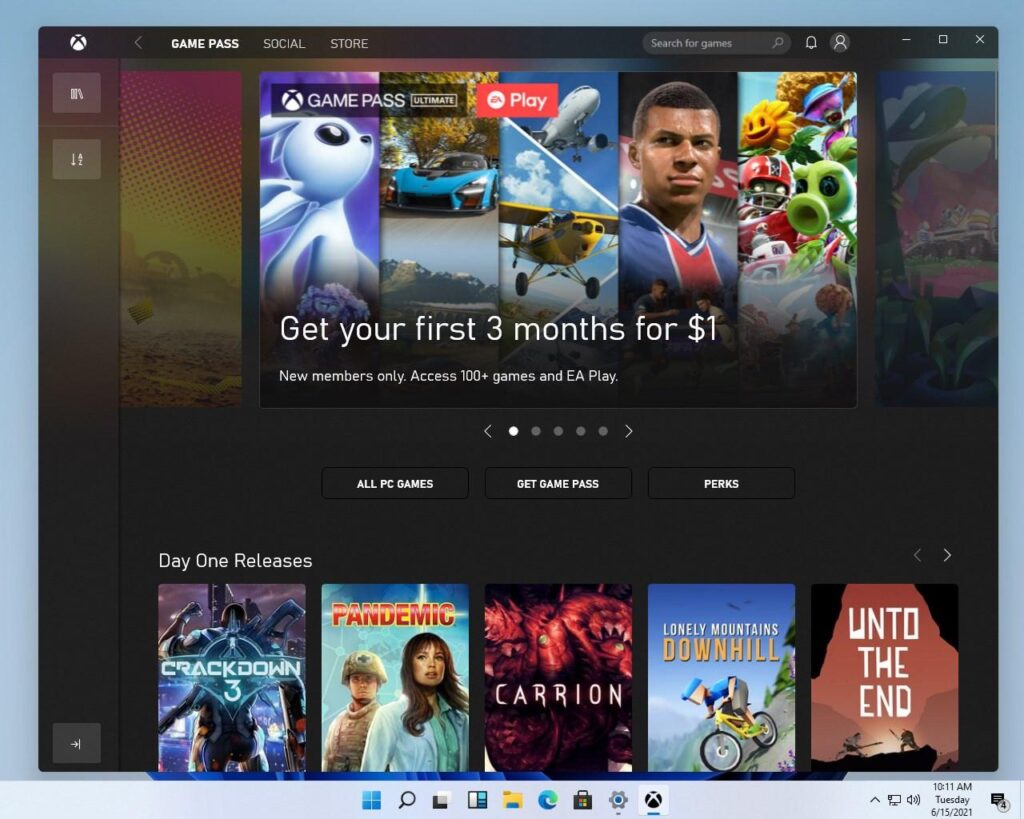 Note that the captures presented by The Verge - except the one in the thumbnail of this article - were probably taken in a virtual machine, without the graphics drivers activated. The graphics rendering is then significantly worse than it should be: this is particularly the case for the "transparency" effects on the start menu or windows.