In September of 2020, NVIDIA predictably launched its new line of graphics cards to replace the GeForce RTX 2000 series. So on September 17, the GeForce RTX 3080 arrived, and on September 24, the RTX 3090. Then things got spaced out with the release of the RTX 3070 on October 29 and the RTX 3060 Ti on December 2. Finally, it was not until February 25, 2021 that the RTX 3060 arrived. This delay has been increasing for a simple reason that NVIDIA did not anticipate: a shortage the likes of which the industry has never seen.

The Covid-19 pandemic is no stranger to the problem. The pandemic has increased the use of telecommuting, which has led to a boom in demand for IT solutions, but it has also led to the need to reorganize operations. To make matters worse, the RTX 3000 series are very good cards that basically have a much better price/performance ratio than their predecessors: this was all it took for demand from gamers to explode... at the worst possible moment. Finally, to make matters worse, the period coincides with a clear increase in the price of crypto-currencies, generating a strong demand for graphics cards, which are very good at mining these currencies. 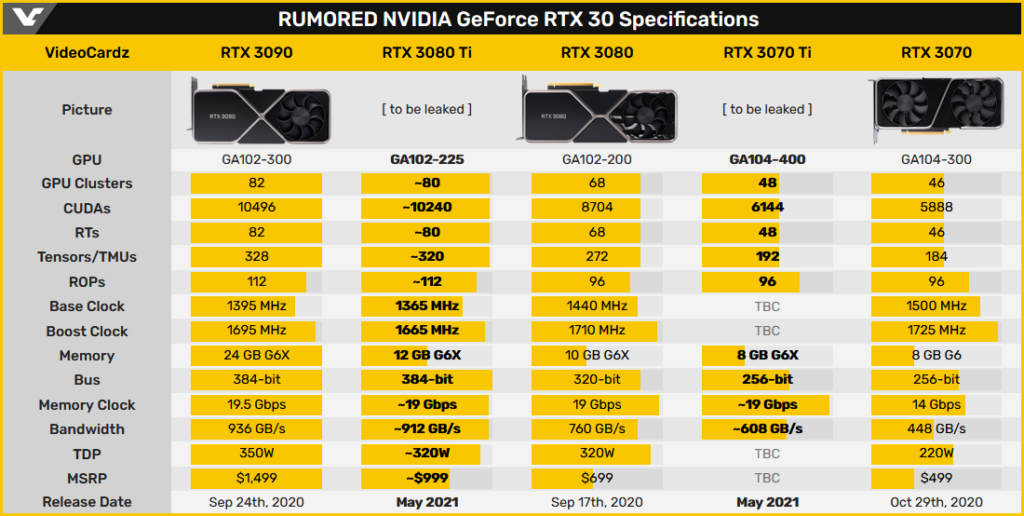 For the end user, the result is an unprecedented shortage that does not get any better as the months go by. However, despite this tense context, NVIDIA seems to be about to distribute two new cards to fill some gaps in its catalog. Thus, there is a notable gap between the RTX 3080 and the RTX 3090 which should lead - if we believe Videocardz - to the release of the RTX 3080 Ti. A card that the latest rumors announce for the end of May. It would be equipped with a GPU significantly larger than the RTX 3080 and 2 GB of video memory more for an official price that would be close to 1,000 dollars.

In June, NVIDIA would even push the envelope with the release of an RTX 3070 Ti, this time filling a small gap between the RTX 3070 and the RTX 3080. Again, it would be a new GPU variant, but we would keep the same amount of video memory as on the RTX 3070: 8 GB of GDDR6X. A memory that would however benefit from a small frequency boost to offer a significantly higher bandwidth. While sources still differ on the release date of this RTX 3070 Ti - some speak of late May - we have no idea yet of its price.