In order to find a solution to the shortage of graphics cards, NVIDIA has considered several avenues, the one of Cryptocurrency Mining Processors seems to be one of the most promising.

Last September, NVIDIA launched its new GeForce RTX on the market. The "3000" series represented by the RTX 3090, RTX 3080, RTX 3070, RTX 3060 Ti and recently the RTX 3060 increases considerably the performance observed in video games and clearly exceeds what the RTX 2000 series could offer. To complete the picture, NVIDIA has significantly reduced the prices of its cards. Problem is, the current situation being what it is, production capacities are unable to keep up with a demand boosted by this excellent quality/price ratio and shortages have been constant for seven months.

To make matters worse, RTX 3000 series cards are also of interest to cryptocurrency enthusiasts who use them to mine Ethereum, whose price has exploded in recent months. For lack of being able to act effectively on the production levels, NVIDIA has therefore imagined a double response made of blocking instruments for mining from graphics cards and marketing of Cryptocurrency Mining Processors (CMP), cards dedicated to mining and devoid of video outputs. 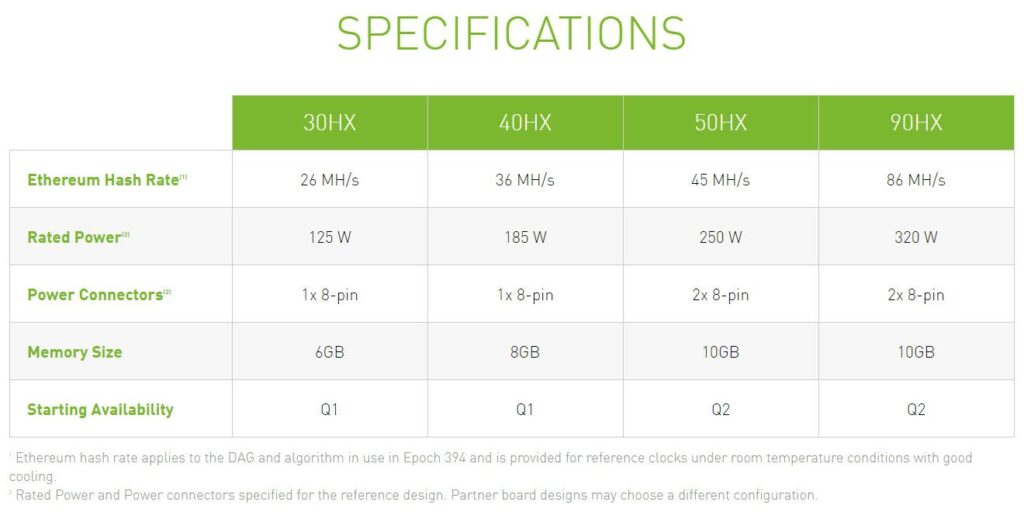 The first CMPs announced by NVIDIA could in no way compete with the performance of graphics cards, but things seem to be changing and there are insistent rumors of the upcoming release of the CMP 220HX based on NVIDIA's most powerful GPU, the A100. The latter is currently only found in professional graphics cards priced at over $10,000. The latest news is that the CMP 220HX would be significantly less expensive since it would be deprived of a large part of the video memory, which is much less essential for mining operations.

The CMP 220HX could cost around $3000 each with an estimated performance of 210 MH/s. However, some point out that two GeForce RTX 3080s do more or less the same thing for a cost divided by 2.5. So it's not clear that this will be enough to turn away cryptomineers from the graphics card market.