It is now a habit, Steam ends the year by presenting different rankings. We have chosen here the ones we think are the most interesting, starting with the best sellers. Be careful though, Steam establishes its ranking without taking into account the number of copies sold, but based only on the sales made.

As always, the ranking is divided into categories - from platinum to bronze - in order to "rank" the 100 biggest 2020 hits of the platform. Unsurprisingly, at the top of the list we find some "familiar faces", games that had already made news in 2019. Thus, Counter-Strike GO, DotA 2, Grand Theft Auto V, Monster Hunter World, PlayerUnknown's Battleground and other Rainbow Six Siege are once again very well ranked. There are also a few headliners of the year 2020 and, of course, Among Us, Cyberpunk 2077, DOOM Eternal, Fall Guys or Red Dead Redemption 2 are among the "best". 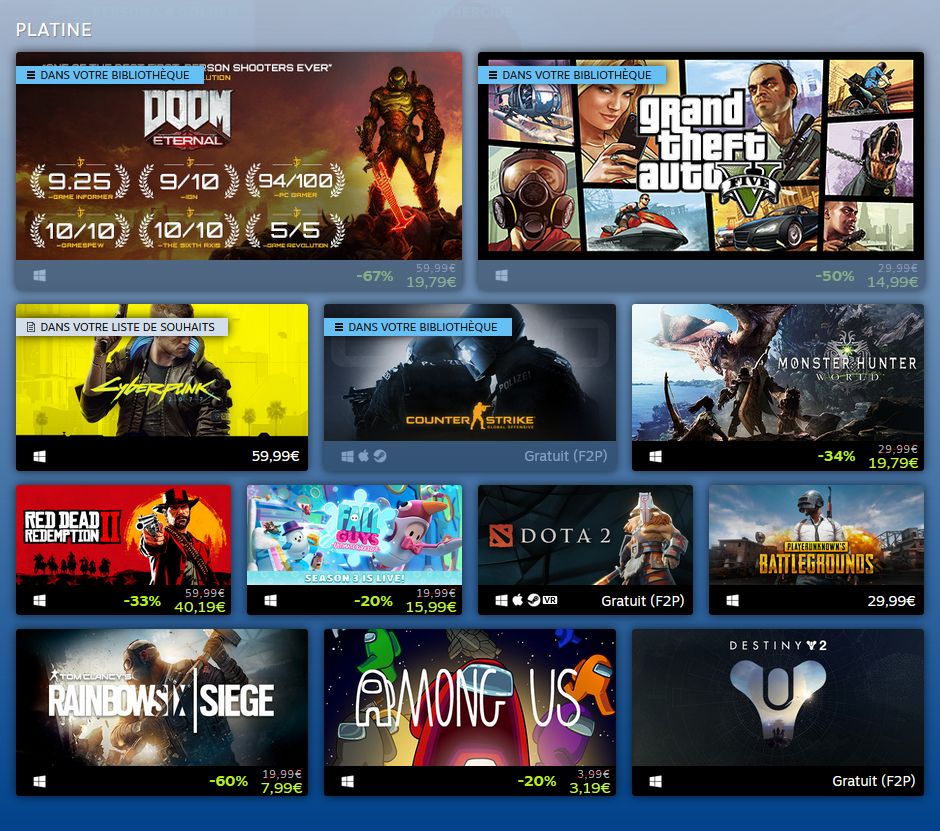 Less "lucky", but not undeserving, several games only reach the "gold" step. This is notably the case for Crusader Kings III, a fine performance considering its "niche" genre. Civilization VI continues its impressive career, four years after its release. Baldur's Gate III is a bit of a surprise, as the game is only available in early access, so it's still far from a final version. Finally, Phasmophobia is one of the nice surprises of the year. Other nice surprises can be found in the silver category like Hades or Raft.

However, Steam does not only look at the sales figures of the games. It also rewards more "original" categories. In particular, the platform mentions games that have managed to gather more than 200,000 players simultaneously: a ranking that better reflects the popularity of a game, although team-based or multiplayer titles are obviously favored. This is how we find Counter-Strike GO, DotA 2, Grand Theft Auto V or PlayerUnknown's Battleground, but others will surprise more like Life is Strange 2 or Terraria. 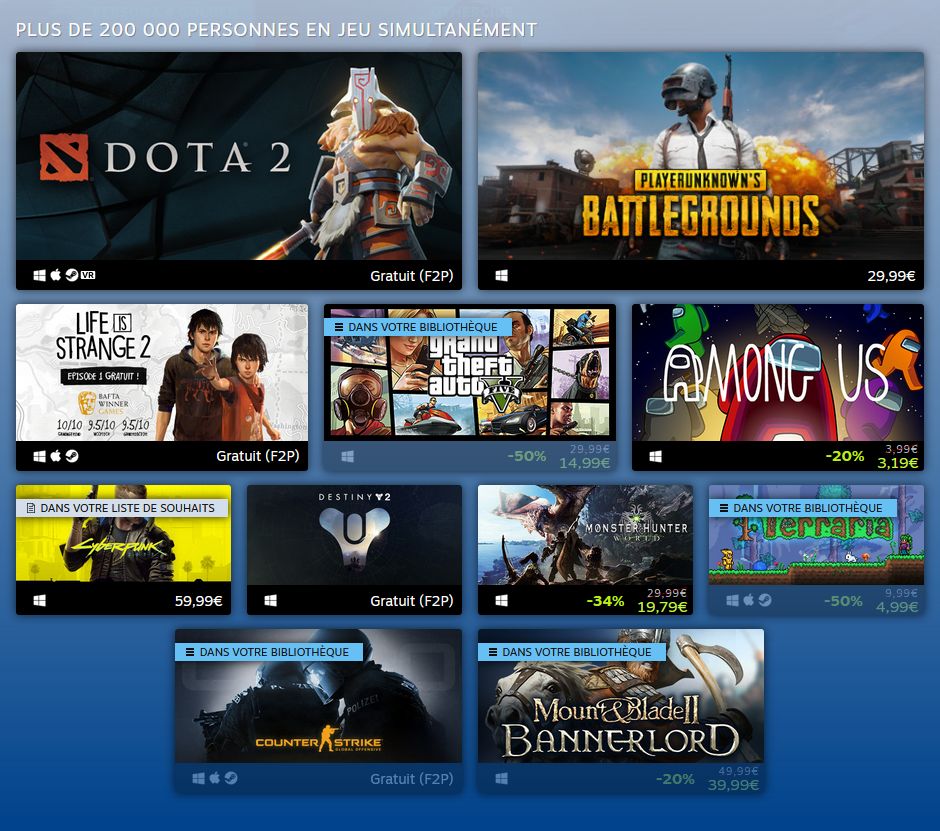 Another ranking focuses on the more specific case of the new releases of the year 2020. Be careful though, these are the new releases on the Steam platform and not the new releases in the strict sense of the term. Thus, Borderlands 3, released on September 13, 2019 on the Epic Games Store, is at the top of the list of this ranking, which also includes previously mentioned games such as Crusader Kings 3, Cyberpunk 2077 or DOOM Eternal. Also noteworthy are Microsoft Flight Simulator, Star Wars Squadrons and Half-Life Alyx.

Half-Life Alyx is also at the top of the list of the most successful virtual reality games in 2020. A ranking that also allows us to see the good places of Beat Saber, SuperHot VR or The Elder Scrolls Skyrim VR in a market that still struggles to really take off. Finally, Steam mentions the great successes of early access. Here, it is not a question of rewarding games still in early access, but of rewarding titles that have been released during the year: Deep Rock Galactic, Factorio, Risk of Chain 2 or Wolfen for example.